Grain prices finished a shortened trading week mostly in the red as the complex continues to ignore some negative weather forecasts on the basis that there’s amply grain stocks and that a crop today can get planted in a very short timeframe. Put another way, the bulls took a breather heading into Easter, with bears fully in control of market direction.

On the wheat front, SovEcon increased their estimate of the Russian 2019 wheat harvest to 83.4 MMT, a significant jump from their previous estimate of 80 MMT. As a reminder, Russia took off a record wheat crop of 85 MMT just 2 years ago. Nearby, a German farm co-op suggests that the wheat harvest there this year come in at 24.44 MMT. This would be about a 21% jump after last year’s dry harvest than lowered production totals. The rain falling in U.S. winter wheat regions has been well received (read: bearish), hence pressure on wheat prices this week.

The NOPA soybean crush report for March was published this past week, showing 170 million bushels were used last month by American processors. This was 2 million bushels above the pre-report estimates but still a little bit below the 171.86 million bushels processed in March 2018. However, it was not enough to keep soybean prices out of the red as the market is thinking that with a delayed start to Plant 2019, there could be more soybeans going in than originally thought. Canola prices followed the soy complex lower.

Technicals suggests November soybean prices could drop down to $8 USD/bushel. Further, most analysts believe that the price of corn might receive some weather premium but the sheer amount of acres should put pressure on corn prices to the tune of something below $3.50 on the futures board in Chicago. Even at today’s levels, let alone the bearish thinking out there, most farmers have an emotional reluctance to sell anything given the weather in the forecast! With more precipitation is expected in the Delta and most of the Midwest, and the Northern Plains getting even more snow, wouldn’t you be reluctant to pull the trigger?

Also being questioned right now is if the land will be able to produce the same significant yields as it has in years past, given the trouble that Mother Nature gave farmers last fall during Harvest 18. With the wet and sometimes snowy conditions (thinking of you Alberta), the ruts and damage that today’s big equipment did wasn’t able to get fixed in the fall and now could be tough to touch this spring. Ultimately, the hope for some brisk winds and low humidity is there but this spring’s wet forecast has been borderline offensive!

Heading into the Easter long weekend, there wasn’t much to update on the geopolitical front. The next round of U.S.-China talks are expected to take place in late May or early June, albeit US Trade Representative Lighthizer is expected to be in Beijing next week. The U.S. was starting new trade talks with Japan, which is probably the most interesting development of the week considering that the U.S. was not a part of the Trans-Pacific Partnership trade deal. There hasn’t been much update between China and Canada on the canola issue.

On that note, there are some farmers in Western Canada who are thinking about not even planting any canola this year because of the risks associated with China not really sitting at the trade table anymore. I think that thanks to feed barley prices and green pea prices, some lost canola acres could go into said peas or barley, possibly flax, or other cereals. Earlier this week, Agriculture Canada came out with its most recent estimates of Plant 2019 expectations. As a reminder, Statistics Canada will put out its own estimates of Canadian acreage intentions next week on Wednesday, April 24th. 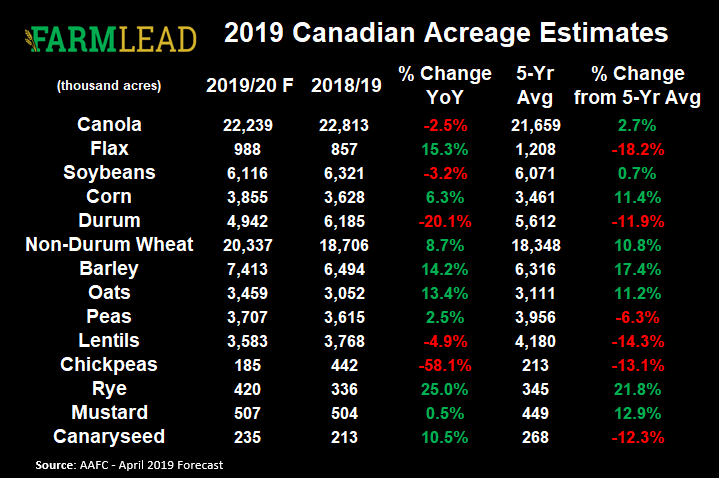 Canadian canola buyers are looking at doing more refining into canola oil and selling the finished product to countries that don’t have processing capacity. Mexico is already one of the top destinations for Canadian canola exports, but the USDA’s attaché down there suggests that soybean crush margins are more attractive than canola. This is an example where instead of sending more straight canola exports to Mexico, sending the actual canola oil might be of more interest. The most recent data from the CGC shows canola exports are tracking 8% behind last year’s pace with 6.73 MMT shipped out through Week 37 of the 2018/19 crop year.

Also, the Canadian biodiesel industry is optimistic that some government help could increase their demand for canola and that could help boost canola prices. Currently that demand is less than 500,000 MT per year but that could grow to nearly 3.2 MMT if Environment Canada publishes its Clean Fuel Standard in 2020 with Advanced Biofuels Canada’s recommendations. While this would certainly be supportive, fewer canola acres in Plant 2019 might be the main contributor to canola prices finding $500 CAD/MT again soon.

Switching countries, the USDA’s office in Australia has matched the estimate from ABARES, suggesting that canola production in the Land Down Undaa will rebound by 68% year-over-year to 3.7 MMT in the 2019/20 crop year, which starts December 1st. This is a result of harvested acres jumping 42% from 4.7M acres last year to 6.67M in 2019 and yields also rebounding significantly. Accordingly, the USDA’s Aussie attaché also expect canola exports to recoil by 29% to 2.4 MMT, with Europe accounting for about 2/3s of that volume.

However, should the political spat between Beijing and Ottawa continue (and Canadian canola exports remain in the middle), Australia canola exports to the People’s Republic could increase and, in turn, Canadian canola might go into those other Asian markets that Australia has normally traded with, namely South Korea, Japan, and Malaysia. This game of musical chairs would help support canola prices for both markets as it would help maintain some export demand. To verify if this is possible, just look at what U.S. soybean exports have done this year, taking up demand that Brazil, Argentina, and/or others would usually fill (but those countries were busy exporting to China).

This, of course, is all on the assumption that Australia gets some much-needed rains and temperatures pull back from their above-average averages (yes, you read that correctly). The Australian Bureau of Meteorology is expecting average precipitation across the country over the next 3 months, but soil moisture in the eastern states continues to be a major concern. The problem is, especially in Eastern Australia, above-average temperatures are expected to be realized this calendar quarter, which intuitively means that the growing conditions won’t be ideal again this year. 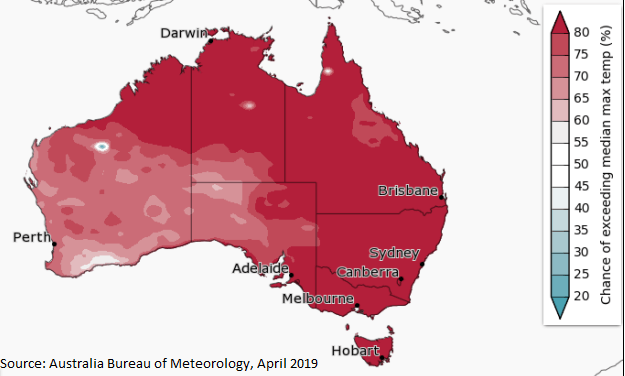 Come Monday, with the long weekend out of the way, the focus returns to the Plant 2019 prospects. The University of Illinois (U of I) reminds us that it farmers in the Corn belt (IN, IL, and IA) need about 2 weeks to plant their entire corn crop. Ironically, their research suggests that investment in bigger/more precise planting equipment has not actually sped up the planting timeframe when weather allows. That being said, last year’s start to the U.S. corn planting campaign was also a bit delayed but the crop still mostly got in before May 20th, after which the U of I considers any fields seeded to be defined as “late”.

Calling a spade, a spade, every planting year is different, and markets will move based on speculation of rumours, momentum of said rumours, and reversion due to facts coming out. When planting or crop conditions change abruptly, this will intuitively result in a similar reaction in the markets. Put another way, to jumpstart grain prices to move higher, we likely need prolonged challenges to Plant 2019. But keep in mind that those rallies can easily be reined in by the large grain stocks that still exist not only in the U.S., but also around the rest of the world. As such, any rallies should not be ignored.

Happy Easter and have a great long weekend!