At the start at what most would call seeding month, Agriculture and Agri-Food Minister Marie-Claude Bibeau announced an extension to the AgriStability program along with an increase to the Advanced Payment Program cap. To some, this was good news — but not enough.

Manitoba wheat grower and newly minted Western Canadian Wheat Growers Association president, Günter Jochum didn’t hold back his thoughts, calling it — as many others did — a bandaid solution.

“The advance program is garbage. Raising it to one million is a bandaid solution. It’s nothing more than a payday loan. Who is really eligible to benefit from the $500,000 interest free portion? A farmer that grows at least 5300ac of canola at about 37bu/ac to qualify for the max benefit. So it’s for large farmers!!! What does it do as far as trade negotiations? Nothing. Nobody has gone to China to start negotiations. We’ve been shut out of the Indian pulse market for two years now, and nothing — no negotiations happening. The cash advance is a slap in the face for farmers. Yes I’m pissed off. Supply Management got almost $4 billion when they gave up 3 per cent market share. What the (heck)? I’m not calling for billions for grain farmers, I’m just stating where this government’s priorities lie.”

Those like Sarah Leguee, a farmer near Fillmore, Sask., shared just about the same reaction as Jochum. 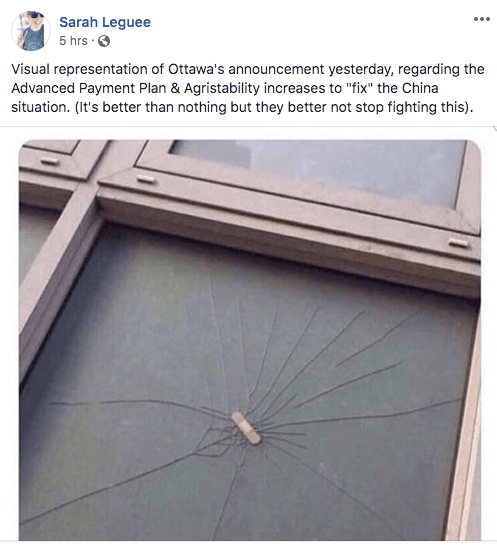 Market analyst, Brian Voth from Winnipeg, Man., says this announcement doesn’t solve any issues with trade adding that unless the government expects the canola trade spat with China to be resolved within the next 12 months — it has the potential to make the overall impact even worse.

Tory Campbell, a farmer from the Coaldale, Alta., area says he’s disappointed by the move. “This mess was not the fault of producers, but we’ve been put in a tight spot,” Campbell says. “Letting us dig a deeper hole isn’t much of a solution in my mind.”

Last month, when asked about compensation for canola producers, Minister Bibeau wouldn’t comment on the matter and continued to push that a science-based solution will resolve the issue.

U of M dairy research receives $1.4 million in gov’t funding

Farmers who open business accounts may now qualify for CEBA

It’s time for Day 3 of Ontario Diagnostic Days! The annual Ontario crop diagnostic days were back in the field on July 20 and 21, 2022, but only at Ridgetown campus University of Guelph. Not everyone could attend these two field days, so the organizing committees of these highly successful in-field education and learning events are…