As wet planting conditions persist across Ontario, many growers have switching on their mind: should they switch to shorter-season corn hybrids or even leave corn in the bag and plant soybeans?

From an economic perspective, the best choice is likely to switch to shorter-season corn with lower heat unit ratings. The Victoria Day long weekend has come and gone, and while some Ontario farmers have started to plant corn, many are disappointed by more wet weather. Relatively little corn has been planted compared to this point (May 25) in other years — not just in Ontario, but in the U.S., as well.

Leaving corn planting much later raises concerns about the risk of poorer pollination due to heat stress, an early frost before black layering in the fall, or potentially even increased risk of DON (deoxynivalenol, the vomitoxin that created havoc last fall).

Concerns about reduced yield due to delayed planting would traditionally lead producers to plant soybeans in lieu of corn. For example, in 2017 when wet weather also delayed planting, soybeans were priced much higher and farmers switched from delayed corn to soybeans — but this option looks much different this year.

As of May 22, bids for 2019 corn and soybeans stood at $5.06 and $10.46 per bushel, respectively. Given these prices and average yields and costs, projected per acre returns for soybeans are $100 less than corn (see Table One). In past years, late planting may have led operators to switch some corn area to soybeans, but the the difference in net returns between the two crops this year limits the attractiveness of this option. 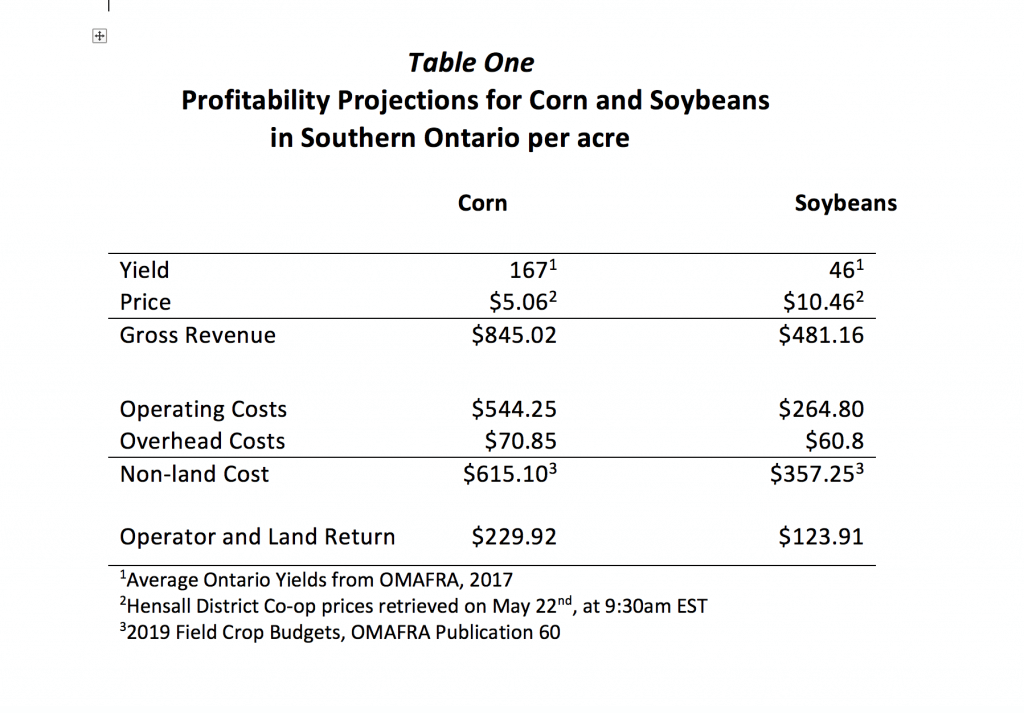 An alternative to planting more soybeans (or edible beans) is to switch to lower corn heat unit (CHU) corn hybrids. Advancements in corn genetics have allowed the yield potential for full season varieties (>3000 CHU) to be maintained even at relatively late planting. But after May 20th, much of Ontario’s mid-maturity corn growing areas (2,800–3,200 CHU-M1) should consider a switch to lower CHU hybrids in order to avoid increasingly large drops in yield potential — as proven in work done by University of Guelph researcher David Hooker and former OMAFRA corn lead Greg Stewart.

Yield potential within these mid-maturity corn growing regions stays relatively constant up until May 20th. However, yields begin to decline significantly each day after May 20th and can exceed 10 per cent if corn planting is delayed until the end of the month.

Alternatively, lower CHU hybrids allow for yields to be maintained within 5 percent of their full potential and can outperform full-season hybrids in a shorter grower season. OMAFRA, in conjunction with the Grain Farmers of Ontario, have a useful tool to compare alternative heat unit corn hybrids at www.gocorn.net.

In addition to having higher yields at the end of the season, switching to a lower CHU hybrid also reduces the risk of DON developing in later-planted corn. Even if the potential yield of a lower CHU hybrid is only slightly better than what may have resulted from full-season hybrids, lower CHU hybrids will mature quicker and will help ensure that drying costs remain reasonable during what could be a late harvest.

China creeps back into the Canadian pea market, but India is still not buying