Grain markets ended the week deep in the red as complex dealt with a myriad off bearish factors, capped off by the May 2019 WASDE report from the USDA. Said WASDE report, U.S.-China trade war talks breaking off, and weak U.S. grain export sales was just too much to offset any bullish dynamic from Mother Nature.

Just when it looked like we were going to see an end to the U.S.-Chinese trade war, the U.S. is accusing the Chinese of trying to renegotiate terms that have already been agreed to. As such, President Trump is upping the ante by raising tariffs from 10 per cent to 25 per cent on $200 Billion worth of Chinese goods. This decision by President Trump is the biggest act yet as it puts a much bigger price tag on nearly one-third of all Chinese products shipped to the United States.

China has stated that they’ll retaliate albeit Trump calmed the nerves of the broader market by sharing that he had received a “beautiful letter” from Chinese President Xi and that the two would likely speak by phone very soon. Regardless, Chinese negotiators left Washington on Friday with no deal in hand.

In the background, we know the containment of the African Swine Fever in China continues to be a major headache for Beijing. The UN’s Food and Agriculture Organization recently estimates that Chinese pork output could drop by at least 10 per cent in 2019. This is far below the 35 per cent decline that Rabobank had suggested two weeks ago.

Staying in the People’s Republic but flipping to the supply side, China expects its domestic 2019/20 soybean output to be the largest crop in 14 years at 17.3 MMT. The USDA attaché in Beijing has also dropped its forecast for 2019/20 Chinese soybean imports to 83 MMT, a far contrast from the official estimate from the USDA in this recent WASDE report of 87 MMT. This basically means when China is already going import less soybeans, they’ll have a bit more from their own farmers to pull from.

Getting into the thick of this month’s WASDE report, there was plenty of bearish expectations going in. For perspective, the May WASDE report is undoubtedly one of the more import reports from the USDA. This is because the USDA gives the grain markets its first official supply and demand estimates for the new crop year and act as a bit of a baseline going forward.

For 2019/20 U.S. production, the USDA is expecting to see an average yield of 176 bushels per acre to produce a crop of 15.03 billion bushels. This was very bearish compared to the pre-report production expectations for 14.841 billion bushels, but the USDA is asterisk their forecast by acknowledging it was based on all 92.8 million acres are currently forecasted, to actually get planted. I’ll dig into the acreage controversy later but it continues to look more bearish when you add the 354 million bushels of additional ending stocks in 2019/20 with the other extra 60 million bushels that the USDA say will be carried over from 2018/19 (compared to their April forecast, that is). 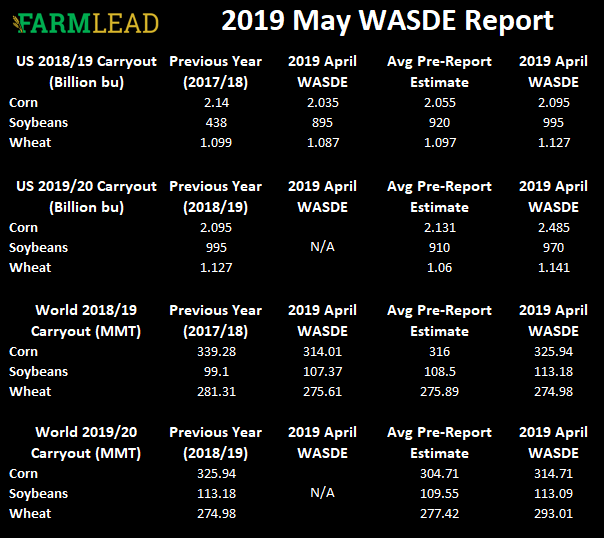 For soybeans, the market was expecting to see U.S. 2019/20 production a little less than 4.2 billion bushels with an average yield of 49.8 bpa. The USDA came out with a 49.5 average yield, to produce 4.15 billion bushels. Like corn, the USDA admitted that their estimate accounts for the entirety of the 84.6 million acres of soybeans to be planted. Further, when the WASDE dust settled, the USDA raised U.S. soybean ending stocks by 75 million bushels for the 2018/19 crop year and had a number that the market was expecting to see.

Coming back to North America, while it’s continued to rain across the American Midwest, speculators still haven’t nudged from their record bearish position and continue to think that, no matter what, the this year’s crop will get planted. To be honest, I have to agree with them on that point, but what I don’t think these fund managers have acknowledged yet is the yield impact the delayed start and all this moisture could have. They’re also factoring in the better planting conditions next week and the week after. Ultimately, May 20th is roughly the cut-off date for top-end corn yields to be realized; after that, potential starts to drop.

What’s sure is that we probably won’t see corn that’s knee high by the fourth of July, which is the old timer’s way of saying you know you have a good crop when. If you can’t get the corn in though, current new crop soybean prices make it a bit tough to switch over. What this all adds up to is that Prevent Plant acres in the U.S. could top 5 million, which would be well above the average of 3.8 million acres.

Given the bearishness of this month’s WASDE report published on Friday, May 10th, those Prevent Plant numbers could certainly be used right now! Ultimately, grain markets seem to be more concerned with the trade war than they are about the delayed start in the U.S. for Plant 2019, but it’s also hard to ignore the crop production potential for this year just as it’s barely beginning.