As many western Canadian producers are passed the halfway point of seeding, American Midwestern farmers are still barely scratching dirt thanks to continuous rains. Grain markets have started to acknowledge some of this latter risk, in addition to the benefit of a second round of trade war aid from President Trump. Looking more continental, the U.S. finally dropped its steel tariffs on Mexico and Canada.

For the week, corn and winter wheat markets made the biggest jumps while the oilseeds and gave up significant ground on Friday, paring some of its gains for the week. Notably, soybeans were down 17-18 cents USD/bushel in Friday’s trading. Hard red spring wheat started the Friday up 10 cents in morning trading but only squeaked out a 1 cent gain on the day. As such, its weekly performance was a bit subdued, all things considered.

Getting into production potential, U.S. planting progress continues to lag way behind, especially for corn and soybeans. Through Sunday, May 12th, just 30 per cent of the U.S. corn crop was planted, well behind the five-year average of 66 per cent. For soybeans, just 9 per cent of the U.S. crop is in the ground, as far behind the 29 per cent five-year average. With more rain in the forecast for the Corn Belt, it’s expected that more soybeans could instead get seeded as crop insurance dates for corn is coming up next week in most places.

On the cereals front, the U.S. winter wheat crop continues to look pretty good as 64 per cent of the crop is still rated in good-to-excellent (G/E) condition. That’s up from the 36 per cent G/E rating it got at the same time a year ago. American spring wheat seeding pace in the U.S. picked up last week with 45 per cent of the crop now planted. However, this is also double-digits behind the five-year average of 67 per cent. For oats, 62 per cent was planted through last Sunday (83 per cent five-year average) while 43% of the American barley crop is in the ground (64 per cent five-year average).

Across the 49th parallel, in Manitoba, 50 per cent of the crop was seeded through Monday, May 13th, in-line with last year’s pace and the five-year average. Some cooler and drier weather is leading to some farmers planting soybeans ahead of canola. In Saskatchewan, 38 per cent of the crop was planted through Monday, May 13th, which is slightly ahead of the 35 per cent completed at this time a year ago and the five-year average of 31 per cent. However, 47 per cent of the province is considered to have short-to-very short soil moisture conditions. On the flipside, provincial crop inspectors say that 52 per cent of the province’s soil moisture is adequate. Seed into dust and the bins will bust? 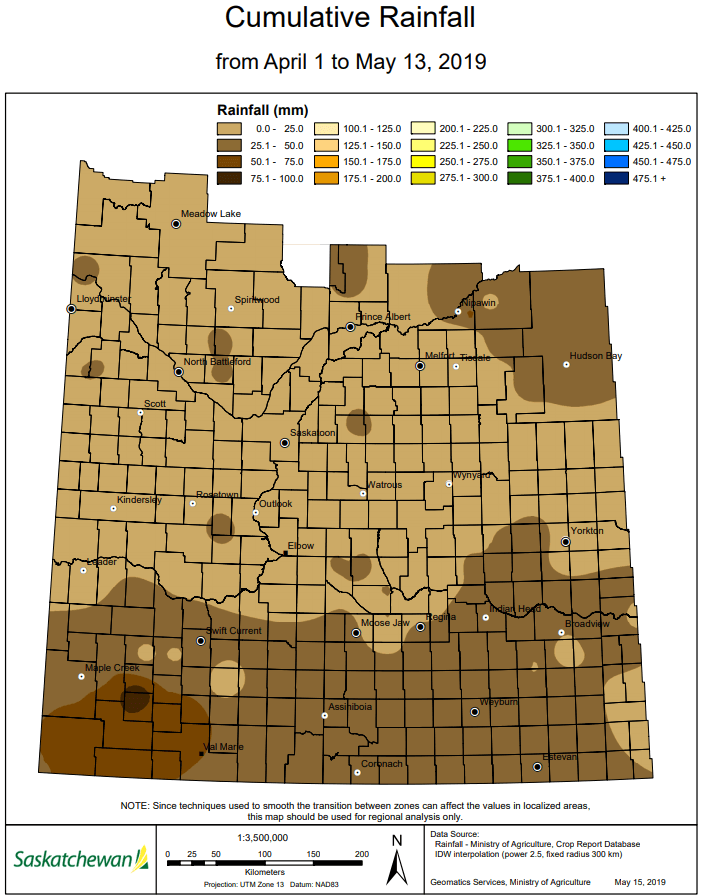 In Alberta, more than 42 per cent of the crop is in the ground as of Tuesday, May 14th, led by more than half of all Wild Rose spring wheat acres now drilled. The total acreage seeded is well above the 7.7 per cent seeded through the same week a year ago, and is tracking well ahead of the five-year average of 25 per cent planted. Southern areas and the eastern half of the province continue to be trend drier though, with 40 per cent of the area considered to have fair-to-poor soil moisture ratings. 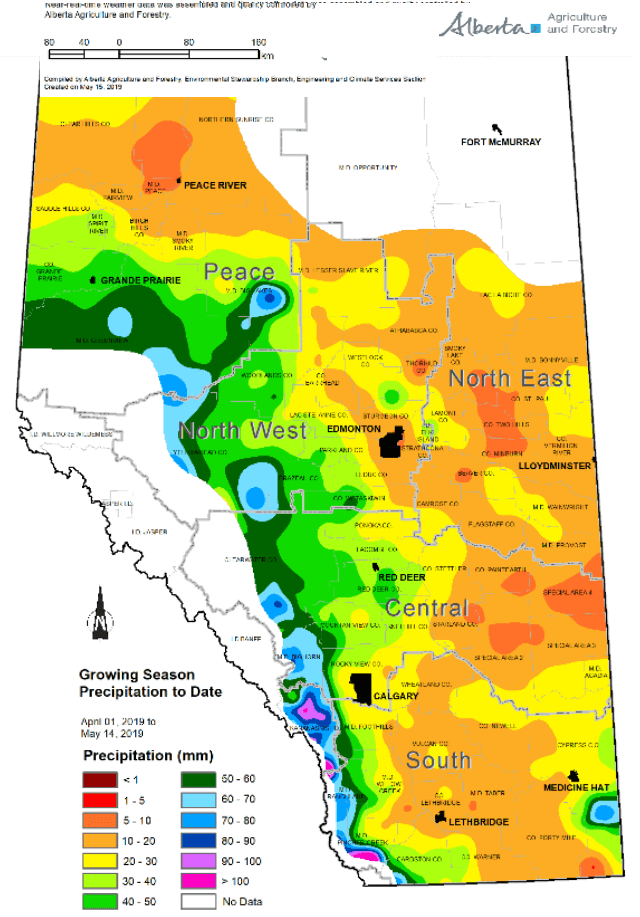 A lot of the activity in the grain markets this week were either attributed to the weather or the trade war between the U.S. and China. On Wednesday, President Trump signed an executive order barring U.S. firms from using telecommunications gear made by companies deemed a national security risk, which could easily include a lot of Chinse firms. Further, the U.S. government will be screening the purchase of Huawei equipment by American companies.

More concretely, the U.S. government has put Hauwei and 67 of its global affiliates and subsidiaries on an export blacklist, in addition to banning the telecom giant from participating in the development of America’s 5G network. It’s expected that Hauwei will also be put on an “Entity List” which means that any U.S. company will need a special license to sell products to the world’s largest networking gear maker and second-largest smartphone brand.

The White House maintains that the pursuit against Huawei is separate from the trade war negotiations. However, if we’re being honest, they go hand in hand. If you need proof, just look at China’s reactions the Huawei CFO, Meng Wanzhou being detained in Vancouver and the subsequent impact on Canadian canola prices and exports. One could argue that China knows very well that they have a formidable American opponent in President Trump and company, especially when compared to the actors in Ottawa.

Complicating the relationships between Beijing and Ottawa was the former arresting two Canadian citizens yesterday on espionage charges. Technically, the two have been detained for months but no formal charges had been laid until now. Overall, the political interference in grain markets has been augmented, notably, with the U.S. government announcing an additional $15 Billion in trade war financial aid to American farmers, the second round of support for lost incoming due to the trade war.

This past week, the Grain Growers of Canada called on the Canadian federal government to support Canadian farmers in the “increasingly unpredictable trade environment”. While the Prime Minister’s Office has provided more dollars for cash advances for Canadian canola farmers, that money has to be paid back; the American farmers’ aid does not.

Overall, with the federal election less than 6 months away in Canada and more presidential candidates appearing every day for the 2020 run for the Oval Office, politics are intertwining with grain markets more and more. As much as I’m against political interference in markets, it’s clear that the governments of both the U.S. and Canada have to figure out how to help their farmers. As such, I don’t expect political involvement in grain markets to slow down and you shouldn’t either.

Are Markets Poised for a Post-Harvest Rally? A Review of StatsCan Numbers with Wayne Palmer

Enjoy the rare, late summer rally — This week in the grain markets

Asking Premium Questions — This Week in the Grain Markets

Eyeing the Competition — This Week in the Grain Markets