Parts of the Prairies have received decent rainfall recently, though some areas are still waiting on even a drop. For those who were blessed with a little moisture, if you’re wondering whether or not to top up nitrogen on the wheat crop, listen up.

Peter Johnson, agronomist for RealAgriculture, says that for those that backed off rates at seeding because the yield potential just wasn’t there but ended up with some rain, you’ve got a window now to bring that N rate up to match yield potential. If you only applied two-thirds of N needs, for example, a 2″ rain may move that crop yield up to near full, meaning it needs the last third of N.

“As long as the N is on by flag leaf and you get a little moisture to get it into the soil, it’s nearly as good as having put it on at seeding,” Johnson says. The key is you need that little bit of moisture again to move the N into the root zone so the crop can use the fertilizer.

If you do decide to top off N rates, how much do you put on? Johnson says it has to be based on yield potential, absolutely, knowing that in Western Canada wheat needs about 2.25 to 2.5 pounds of N per bushel. Account for soil release, know what you started with and adjust for the added yield potential, but keep in mind that there may not be much of a protein premium this year, given the low yield potential in so many areas. 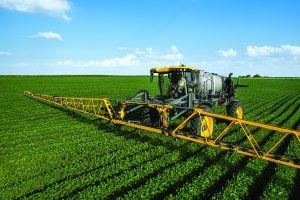 John Deere's line-up of Hagie self-propelled sprayers is all new — except for the boom. Deere says its Hagie STS sprayers have been rebuilt from the ground up; however, growers will recognize its signature forward-facing spray boom. Joel Basinger, marketing manager for John Deere, says three new self-propelled  models, STS12, STS16, and STS20, are available with…Read more »

Beef Tracing Is a Reality