Grain prices gained a lot of ground this week as the complex was supported by a bullish WASDE report from the USDA and wet weather from Mother Nature. In contrast to last week, the hard red spring wheat ticker in Minneapolis was the only one in red this week. On the flip-side, corn and winter wheat performed brilliantly.

Tuesday’s WASDE report saw U.S. corn yields fall by 10 full bushels to now sit at an average of 166 bushels per acre across the country. This – combined with planted acres falling by 3 million – resulted in U.S. corn production dropping 1.35 billion bushels to 13.68 billion. Keep in mind that this is still a huge crop, relatively speaking, (only the smallest since 2015/16), but it does drop ending stocks to their lowest since 2013/14. 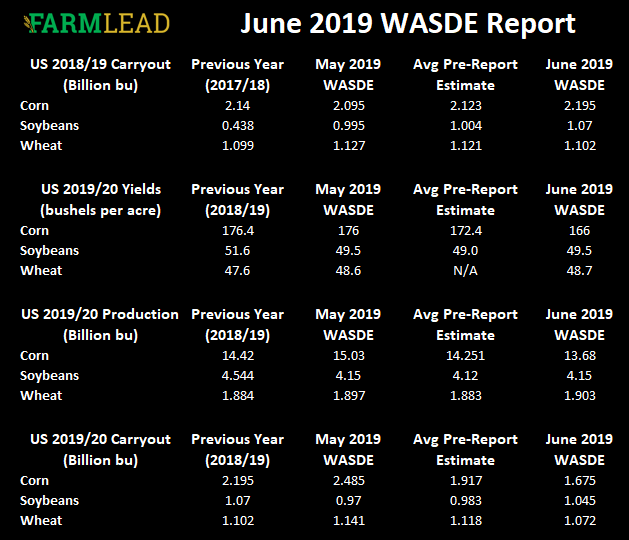 On the demand front, the USDA cut 2019/20 corn use by 425 million bushels, including 125 million from exports and 300 million bushels from feed and residual use. We’re also now starting to see some substitution effects as corn prices rise, notably U.S. wheat going into the feed markets, which was only increased by 50 million bushels. While there were few changes to report on the U.S. soybean balance sheet, the USDA did acknowledge in their oilseeds report that “global oilseed consumption continues to grow despite slowing trade and production.”

Except for corn, the global numbers that came out in the June WASDE report were a bit more neutral, with no major changes. Yes, 2019/20 worldwide corn ending stocks were dropped significantly to reflect the downgrade in U.S. production, but there weren’t too many changes. Maybe the one highlight would be the USDA raising Brazilian corn production estimates to 101 MMT, a new record.

For wheat, again, there wasn’t much change in this WASDE report, except for Black Sea numbers, as the USDA dropped both Russian and Ukrainian wheat production by 1 MMT. This puts their 2019/20 wheat harvests at 77 MMT and 29 MMT respectively. For the record, these are both below local forecasts from private analysts, including SovEcon’s estimate of Russian wheat production at 82.2 MMT.

Canada’s wheat production number stayed at 34.5 MMT, Kazakhstan and Argentina held at 13.8 MMT and 20 MMT respectively, and even Australia’s number did not move from 22.5 MMT. However, ABARES did lower their estimate of 2019/20 wheat production in the Land Down Undaa just this morning to 21.2 MMT from their first forecast of 23.9 MMT. This is mainly a reflection of the drought conditions that are facing a large part of Australia’s production area for the third straight year. 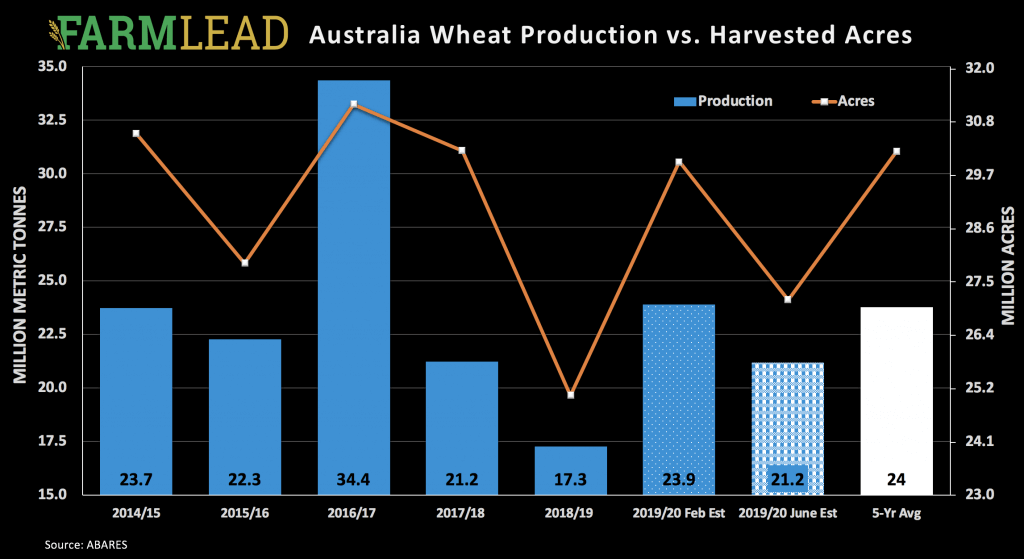 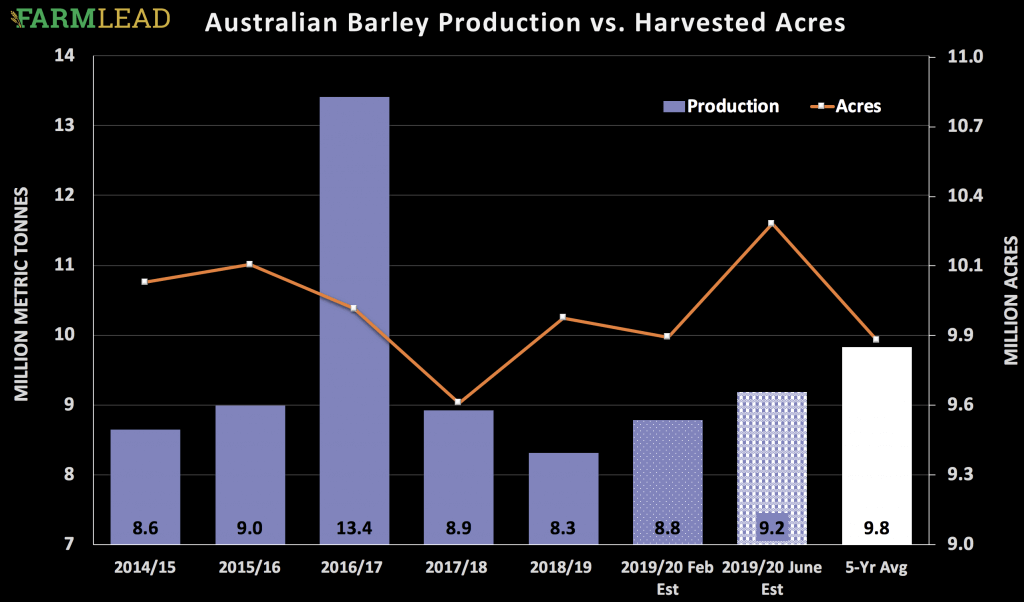 Staying in dry spots, there are ongoing concerns for the crop in Western Canada as drought conditions are having an impact on production potential. For example, the drought has created a flea beetle issue for the canola crop, which is already stopped growing in a few places in Saskatchewan because of the heat. That being said, canola and hard red spring wheat prices fell this week on the expectation that between one and four inches of rain will fall on the Canadian Prairies over the next seven days.

Conversely, while corn prices rallied earlier in the week on the back of the yield and production cuts, it’s the ongoing wet conditions in the forecast for southern and eastern parts of the Corn Belt, as well as parts of the Delta that’s got the bulls running. This potentially means more Prevent Plant acres (at least in soybeans) thanks to the slowdown of any remaining progress left in what’s already been a historically slow Plant 2019. 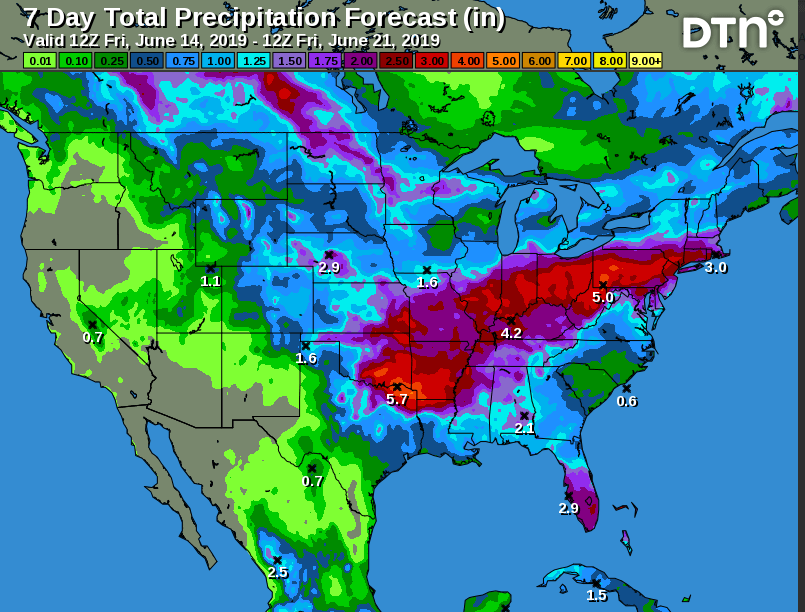 Overall, grain markets are certainly cognizant of the production potential of the 2019/20. Should Western Canada receive the rains in the forecast over the next seven days, you’ll likely see canola and spring wheat prices start pulling back. For the latter, given the increase in acres, there is some big spring wheat production potential in the ground right now but only if some moisture comes along.

It’s the opposite for soybean and corn prices though, as the rains have been anything but helpful in the Midwest. Should these rains materialize, it’ll continue to soak already-wet soils and the yield potential of the crop will start to drop off. Put simply, there might be more room to run in this rally, especially for soybeans.

Grain prices ended one of the most hyped-up weeks in recent memory very mixed as the Phase One trade deal between the U.S. and China was signed. Put simply, the trade deal signed between China and the U.S. on Wednesday should’ve been a positive for grain and commodity prices in general, but the complex has…Read more »

Chasing Chickens — This Week in the Grain Markets

Warm Weather Predictions, ‘Green’ Canola and Mother Russia Opens the Gates for Wheat — This Week in the Grain Markets

The US Crop Tour Estimates, StatsCan Numbers, and Harvest Begins — This Week in Markets