To end the month of May, grain prices took a bit of a hit on the last trading day of the month, with most crops on the futures board seeing double-digit losses. The complex was still able to squeak out some gains for the week (as shown below). Put simply, all those traders who were once short (read: bearish) corn and soybean prices, have now exited those positions, and those who bought on the way up during the rally have also exited their positions, taking profits. Ultimately, this brings us back to a bit of a standstill in terms of price direction as we flip the calendar into June.

Before we get into the nitty gritty of this weather market, China is expected to slow its buying of U.S. soybeans until the U.S. slows its tariff escalation. This has certainly hurt U.S. soybean prices a bit, especially since the April 2019 customs data from China shows more Brazilian purchases. More specifically, China imported 1.75 MMT of Americans soybeans in April, up nearly 250,000 and 16% from March. However, it’s a big question mark if 6 MMT of US soybeans bought by the People’s Republic will get shipped or not. Conversely, China bought 5.78 MMT of soybeans from Brazil in April, more than double the 2.79 MMT they bought in March.

President Trump has threatened to put a 5% tariff on all goods coming in from Mexico with incremental increases to that percentage if the flow of illegal immigrants from Mexico into the U.S. doesn’t slow. Although the Mexican President has suggested that they will not retaliate, this potentially opens the door for Mexico to stop buying corn from the U.S. and instead look to other options. Mexico may pull a page out of China’s playbook and look to Brazil, where a record second-crop/safrinha corn harvest is taking place.

Coming back to North America, Scott Irwin, an ag economist from the University of Illinois has been sharing some great insights and visual perspective on the state of Plant 2019 in the U.S. this year. Mr. Irwin has noted that “over the last 40 years, the previous worst late planting years were 1993, 1995, & 1996. 2019 planting progress as of Sunday was 29% behind 1993, 13% behind 1995, and 20% behind 96!!” Further, he went on say that to help try to get a handle on where corn prices can rally to, it’s important to ask the question of “what corn planting Mother Nature is going to allow in the next two weeks.” What we do know is that t’s going to take at least a week for a lot of the rained-on areas in the Corn Belt to dry out, but they’re going to have to deal with more wet weather until least next weekend! 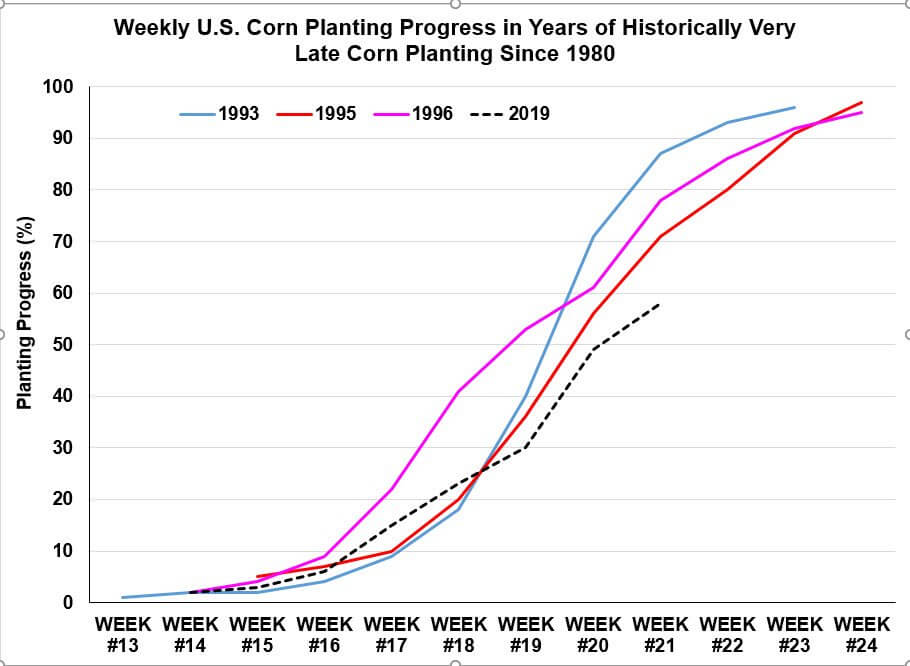 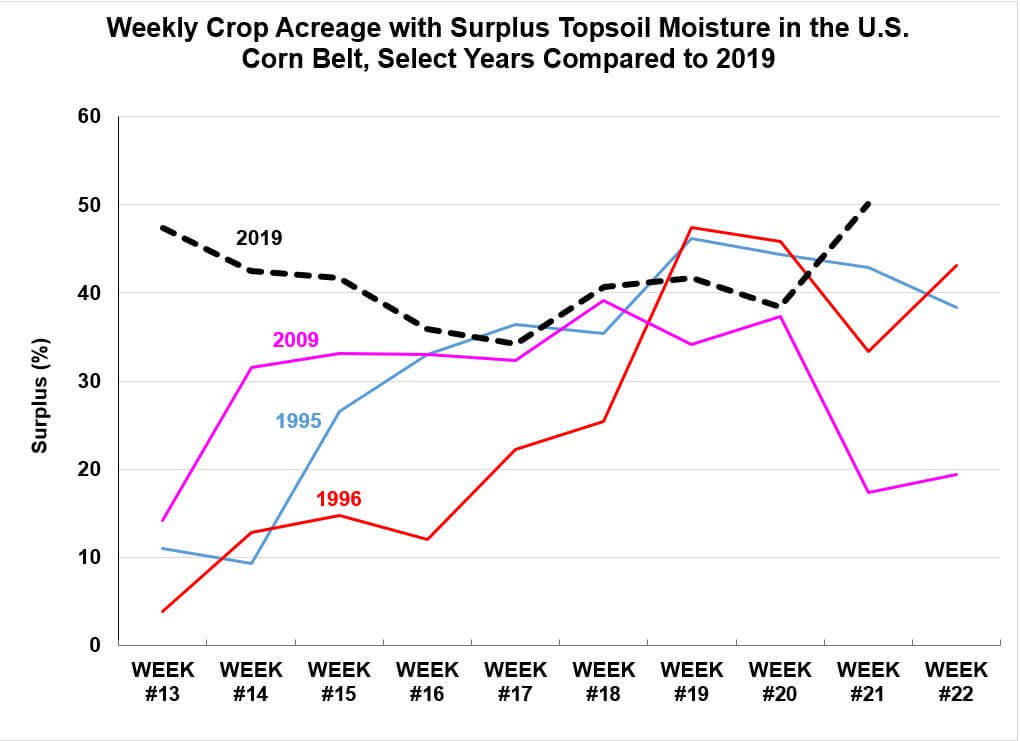 Given the amount of surplus moisture in the U.S. Corn Belt as noted in the chart above, this is an unprecedented situation. Literally, we don’t have any data or historical references that compare to what we’re seeing this year. What we do know is that, with the rains this week, and the moisture in the forecast for next week, planting prospects have worsened in most areas. Accordingly, Mr. Irwin posits that up to one-third (or 31 million acres) of American corn acres will NOT be planted by Sunday, June 2nd.

To understand what sort of price ramifications this could have, Mr. Irwin and his Illini associates estimated that, if 5 million acres of corn acres lost to Prevent Plant, front-month corn prices could head to $4.50 USD/bushel since 2019/20 endings stocks could drop to 1.528 billion bushels from the 2.485 billion bushels estimated in the May WASDE report. Should 10 million acres of corn go into Prevent Plant, ending stocks could drop to 1.005 billion bushels and corn prices could easily climb to $5!

QT Weather notes that the weather over the next week will continue to be wet not only across the Corn Belt but also the U.S. Southern Plains where they’re just trying to get the winter wheat harvest started. Accordingly, this will likely support wheat prices a bit more, something I mentioned a week ago. 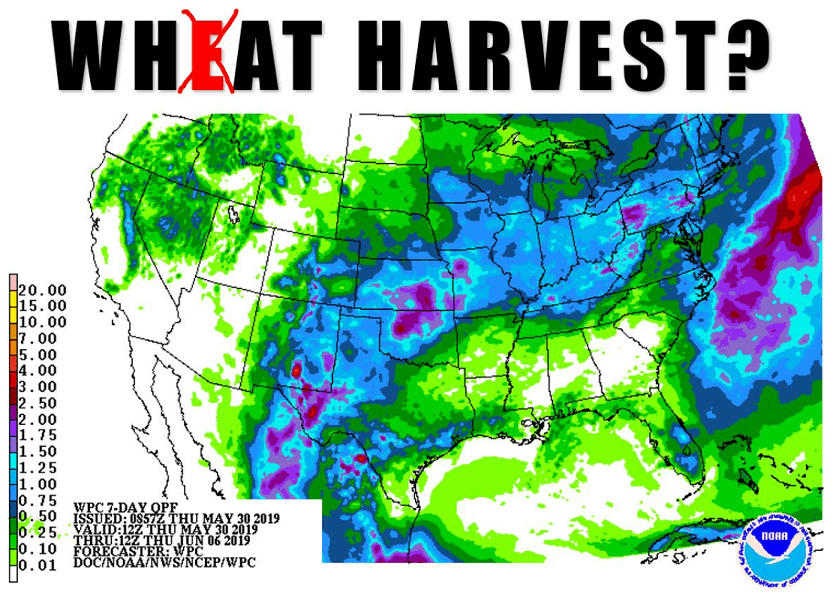 Moving north, Drew Lerner of World Weather Inc. said that Eastern Canada, like the Midwest, is going to remain wet for another few weeks. Conversely, he notes that the Canadian Prairies will stay dry for potentially another 2 weeks before Mother Nature provides some moisture relief. The Weather Network recently echoed this sentiment as it expects near normal temperatures and precipitation for the rest of the summer. On the flip side, southern Manitoba and eastern Saskatchewan saw some chilly temperatures this past week. Those colder temperatures, limited moisture, and a weaker Canadian Loonie.

Ultimately, traders will continue to watch any updated weather maps with a very close eye. At this point, the market is likely to get long on wheat and corn prices, but geopolitical entanglements are slowing the gains in soybean and canola prices. That said, with this extra moisture falling on top of the already-soaked U.S. Midwest, traders are likely to have a bias towards getting long the market in the short-term. 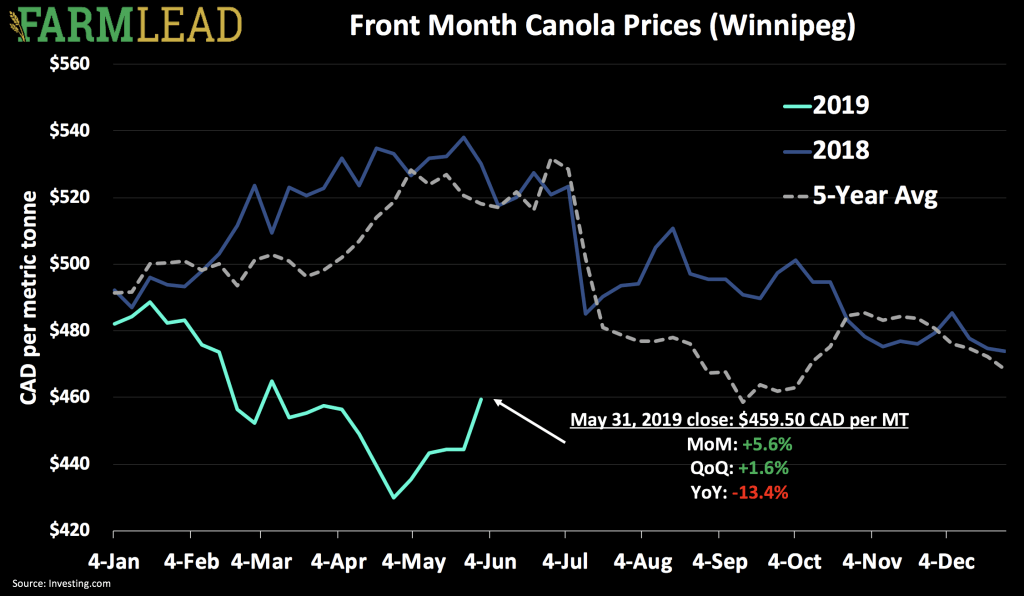