Western Canadian crop growers will soon have a new ally in the battle against weeds with the launch of WEEDit optical spot spray technology at the Farm Progress Show in Regina, Saskatchewan, June 19-21.

WEEDit uses advanced sensors to detect chlorophyll in the leaves of weeds in fallow fields, triggering a targeted herbicide application. The precision spraying technology saves growers time and money with spraying and reduces overall herbicide usage, says Croplands Equipment, a Nufarm subsidiary and Australia-based company, which has led the charge in bringing WEEDit to market.

With more than 10,000 WEEDit cameras sold in the past five years, the company claims the optical spot spraying technology has been instrumental in helping farmers gain the advantage in weed management and control.

“Although we have different climates, Australia and Canada face similar issues when it comes to crop protection, including herbicide resistance, increased environmental awareness and rising input costs,” says Croplands Equipment’s Steve Ross. “WEEDit has helped Australian growers make tremendous inroads in the fight against weeds, and we see the potential for it to do the same in Canada,” he adds.

Many growers got their first look at the technology at the CanolaPalooza field day event held at Lacombe, Alberta in 2018. In this interview, Tom Wolf, with AgriMetrix, explains how the sprayer works. He notes that WEEDit is proving itself a real time and product saver, and could have a significant impact on herbicide resistance management, as well. Wolf adds that some farmers are achieving a 75% reduction in chemical use in pre-seeding passes. 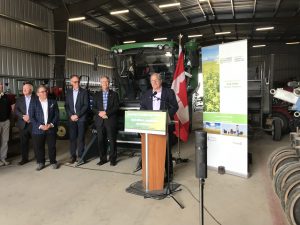 Federal minister of agriculture Lawrence MacAulay was at the University of Saskatchewan this week to announce $11.1 Million in funding for SaskPulse and Pulse Canada under the Canadian Agriculture Partnership, AgriScience Clusters. In addition, $7.2 million of industry matching funding will bring the total investment to over $18 million. At the press conference, held at…Read more »