Public speaking. For you 4-H-ers out there, you’ve probably competed in an agricultural-based public speaking competition before, whether it was to your excitement, or you were doing it because it was mandatory in your district. Growing up outside of the 4-H sphere, and not living in a big centre, these were skills I didn’t really have a chance to hone.

I grew up on a grain, oilseed, forage, and pulse crop farm. I left the farm after high school to pursue my diploma in broadcast news, followed by my degree in communications. Although never actually a part of a speaking competition, I was familiar with public speaking and familiar with agriculture —  but definitely wasn’t familiar with the idea of both. 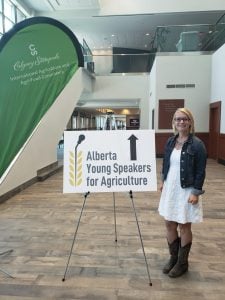 Last summer, I had the opportunity to speak up for our challenging and exciting industry through the Alberta Young Speakers for Agriculture (AYSA) competition at the Calgary Stampede. Just days before the registration deadline, I stumbled across a post on Twitter that someone had retweeted from AYSA, with the topics and the registration link. There was an opportunity to win $1,000, and a trip to Toronto to compete in the national competition — Canadian Young Speakers for Agriculture (CYSA). There were lesser monetary prizes too, and being a student, I would put in work to come out with a $10 coffee card. I hemmed and hawed for awhile, as I had never heard of the competition, but after some encouragement from co-workers and my boss at the time, I was registered by the end of the day.

I went home that night, and gave my Dad a call, to see what he had thought about the topic I had chosen “What is sustainability, and why does it matter to Canadian Agriculture?” We sat on the phone for less than 10 minutes, while we both quickly brainstormed some ideas. After creating a mind map of sorts for myself, I was feeling a speech brewing. I sat in the Calgary Airport the next morning, (I was off to Regina for work), and I wrote.

I’ve written many news stories, press releases, and essays in my life, but to this day, it was one of the easier things I’ve written. I don’t say that to sound over-confident. In fact, I really hope it portrays the opposite. Everything I wrote in that speech really made sense to me, and from there, the words just flowed. I was excited to share my thoughts and opinions. In fact — I had written too long of a speech originally, and spent many hours trying to chop things down.

Naturally, AYSA competition day came in the blink of an eye. (Doesn’t help I registered less than two weeks before the event). I got to the competition and listened to the previous speeches before mine as I was one of the last to speak. I thought there was no way I really stood much of a chance. I’d never competed, and was more or less there for the experience of going through it. My competition was fierce and provided some super interesting and valid speeches.

There were two different rounds, with two different judging panels. I made it through the preliminary eliminations, and I’ll never forget high-fiving my parents (who drove three hours just to watch me for a total of seven minutes – if that’s not love and support, I don’t know what is) because that was what I was aiming for. ‘Wouldn’t it be cool if I made it to the finals?!’ we half-joked.

Fast-forward to the awards ceremony after the final round: They announce that the top six would all be getting prize money. BOO-YA! I was pretty pumped that I knew I’d be walking out of there with $150. (Like I said, I’d be happy with the coffee card). But they don’t announce my name. Okay, hmmm. I must have made 3rd place. I didn’t make 3rd. I look into the audience and my parents are shaking their heads. Dad is already starting to smile because I must have had a look of udder shock on my face. I was inside my head self-congratulating myself for 2nd. ‘I’ll come back and try again next year,’ I had thought. And then I didn’t get that either. Somehow, I walked out of there with a first-place ribbon, $1000, and a trip to Toronto to compete in the finals at the Royal Agricultural Winter Fair in November.

I had never been to Toronto or the Royal Agricultural Winter Fair so that in itself was a whole different experience. The airport. The city. The people. All made my small-town eyes widen a bit more than usual.

I was lucky in the sense that CYSA was set up the same way as AYSA, and it provided the same topics, so I was able to go to Toronto with a modified version of my original speech, with a bit of an idea of what I was getting myself into.

However, being it a national competition, there were some terrific speakers there. I had completely memorized my speech and was determined to do it without cue cards, as I had used them back in Calgary, and it was suggested to me to try not to use them in Toronto. I had had it memorized for weeks, with hardly a stumble in it. 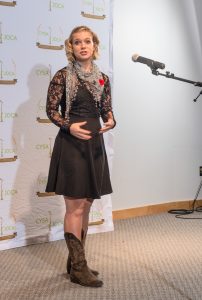 But when I got up in Toronto to speak, it was like I was in the movies. I stared into that spotlight and I blanked. I was able to get through my speech, but not to the depths that I had hoped to. We were given one opportunity to nail our speeches, to one expert panel, and I had blown my chance.

I was originally disappointed in my performance but realized something imperative. I didn’t place in Toronto, but that doesn’t take away from the incredible experience I was given. There are so many misconceptions about agriculture, and to be able to be a woman that was given the opportunity to speak for this industry —  and have people genuinely interested — it was an experience that I’m just so lucky to have stumbled upon.

My speech was picked up by a few different publications and even landed me on an “expert” panel at a conference over the winter, opportunities I would have never had had a chance at if I wouldn’t have just said ‘yes.’ I encourage anyone that has the chance to speak up for this industry that so many of us are passionate about, to do so. We need all the voices we can get!

The Return of the Agriculture Excellence Conference

So You Think You’re Tough? Then complete this 15-minute stress survey.

The Push for a New Agriculture College in Eastern Ontario