The latest Statistics Canada field crop survey confirms what most in the farming community have been talking about non-stop for the last month: dry conditions in the west and wet conditions in the east have significantly impacted what crop mix is in the ground.

According to the June Field Crop Survey, canola, durum, and winter wheat acres were down significantly, with wheat, barley, corn, and peas picking up the acres, depending on the region. 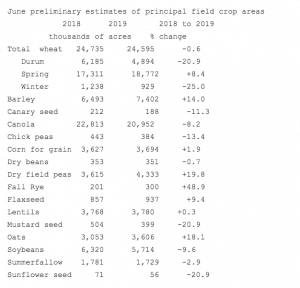 The canola acre slide downwards by about 2 million acres was not a surprise to most, but the move is neutral at best given the change in the global demand picture. Some analysts predict ending stocks are likely to end up about the same because of a lack of canola movement into China.

Farmers intend to plant more spring wheat, this in the face of strong export sales to — you guessed it — China. But analysts note China is not a reliable buyer, and typically enters and exits the market without warning.

While this latest report pegged corn acres up and soybean acres down year over year, Ontario and Quebec planting conditions did not improve after the survey period. Analysts expect a move in both those numbers in later surveys. Also of note, as seen below, winter wheat abandonment was pegged over 30%, with most of those acres in Ontario after winterkill took out several fields across a wide geography.

Here’s an interesting (and probably overlooked) tidbit from today’s StatsCan report. Winter wheat abandonment was 31% this year, highest on record. And most of it was in Ontario. pic.twitter.com/HX3s6K6ld8