Grain markets ended the month of June mostly in the red as the complex was dealt a heavy-handed bearish report on Friday in terms of acres planted in the United States.

Since the collection of information for the June acreage report is from June 10th, intentions from that date and what’s happened since then might be two different things. In this case, there is some bearish buzz in the market that the numbers from the USDA won’t reflect the actuality of what’s happened in the past two weeks and thus, the report could be taken with a grain of salt by grain markets. Going in the acreage report, a Reuters poll of grain trade participants is expecting to see about 3 million less acres of corn than the USDA’s June WASDE report planted acres estimate of 89.8M. For soybeans, the area is expected to fall by about 250,000 acres from the June WASDE’s number of 84.6M acres.

The actual number thought that the government came out with was actually 91.7M acres of corn planted, obviously a lot more than the market was technically expecting. However, it seems like the market wasn’t planning on taking the report with a grain of salt and so the September 2019 corn contract dropped by 21 cents on Friday alone! 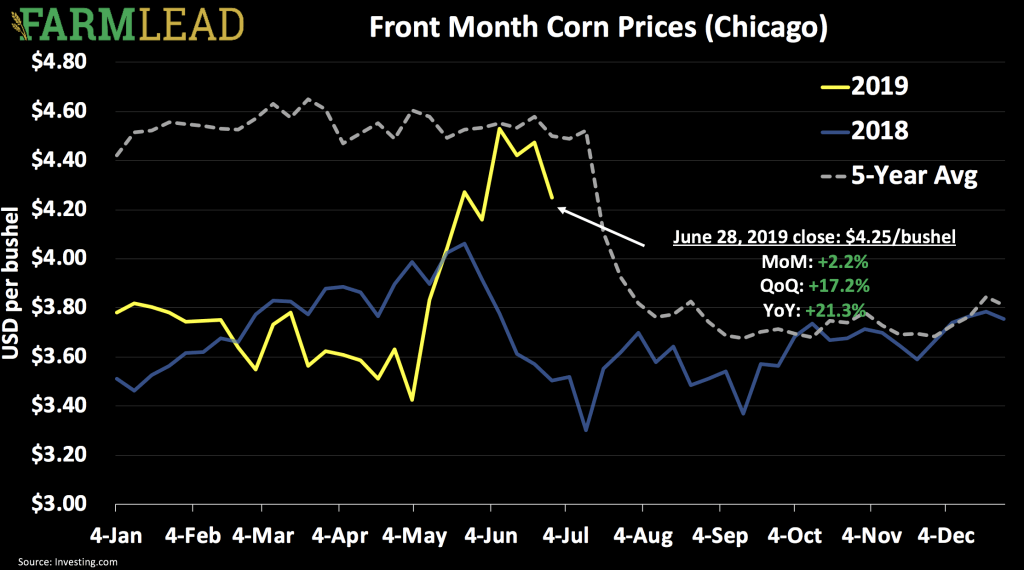 For soybeans, it was a bit more of a bullish story as the government dropped their acreage estimate to 80M from the 84.617M that was estimated in the June WASDE and the market’s expectation of 84.355M acres. While the acreage report has certainly catalyzed the “I don’t think that’s accurate” conversations, the good news is that heat and humidity are starting to build in the Midwest, which hopefully will finally dry out some fields and get the crops growing.

We also got an updated acreage estimate this week from Statistics Canada, on Wednesday, June 26th. The government agency says that 20.95M acres of canola has been seeded for the 2019/20 crop year in the Great White North, and while that’s down 8% year-over-year (or nearly 2M acres) and almost 400,000 less than the March estimate, it’s still more than the 20.575M that the market was looking for. Hard red spring wheat acres were also lowered by about 500,000 from the March estimate to 18.77M acres. More cereals and pulses rounded out today’s StatsCan acreage report as pea acreage is up ~300,000 from the March estimate, lentils gained about 375,000 acres (surprising to me), oats added more than 300,000 acres, and barley gained, almost 350,000 acres from March. 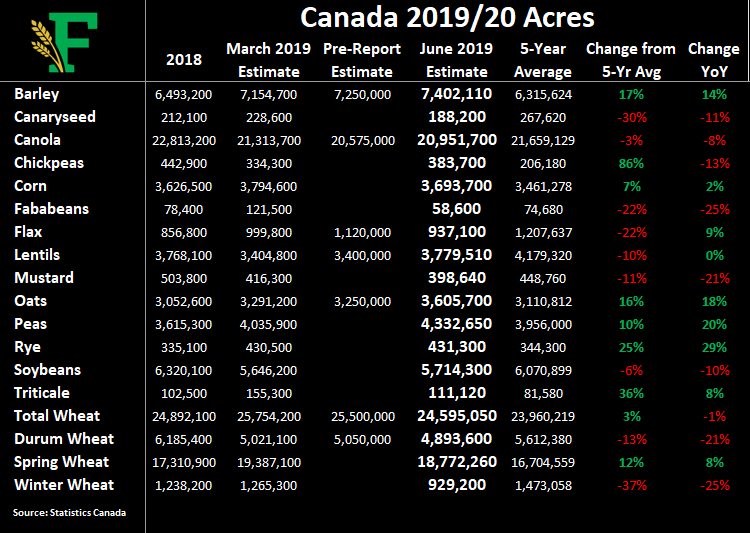 There was quite a lot of buzz on the social networks about what harvested canola acres will actually be, given the dry start to the growing season. Thanks to the export and trade challenges with China, Ag Canada is currently expecting a 2019/20 carryout of 4.3 MMT, which I, and pretty much the entire rest of the industry thinks isn’t likely. While canola prices have fallen on better production expectations with rain finally falling, the other thing leaning on values is the strength of the Canadian Loonie, now sitting up above 76¢ USD. 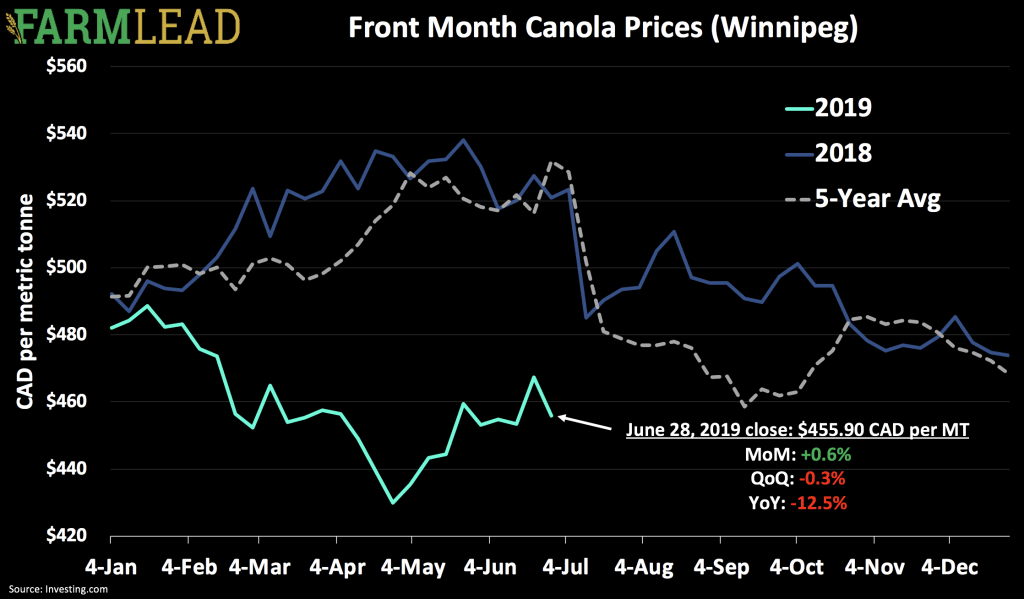 Comparably, in Europe, the rapeseed crop there is taking on some significant heat, but doubling the growing challenge is the lack of available chemical tools to help fight bugs. More specifically, bans on neonicotinoids in France has pushed rapeseed acres in the country to a 14-year low, and those who did plant the oilseed last fall are now battling bugs that they effectively can’t eradicate. The result is an expectation that rapeseed production in Europe will fall more than 6% year-over-year to 18.74 MMT, according to the European Commission. This includes the smallest rapeseed harvest in Germany since 1998!

Switching gears into other topics, the South China Morning Post is suggesting that the U.S. and China have agreed to a trade war truce ahead of their talks this weekend at the G20 Summit in Japan. Once the trade negotiators do their thing, it’s expected that U.S. President Trump and Chinese President Xi will sit down face-to-face, but it’s widely expected that China won’t move unless the U.S. scraps its ban on Huawei. Staying in trade talk, a USDA senior official told the media that a trade deal between the EU and the United States won’t happen unless agriculture is involved, and right now, the EU doesn’t want it included in the discussion.

In other markets, the U.S. Justice Department has opened a criminal investigation into the country’s poultry industry, specifically looking at possible collusion amongst major processors in order to fix prices. The second major livestock headline is that China has accused the Canadian government and its pork industry of forging 188 veterinary certificates which supported the shipment of meat that contained traces of the feed additive ractopamine. As a result, starting today, China is stopping the import of meat products from Canada and the Chinese embassy is saying this hardline action is being taken “in order to protect the safety of Chinese consumers.” To make sure you have both sides of the story, AgCanada has confirmed that were some “inauthentic certificates” but they referred to said incorrect paperwork as a “technical issue”.

Have a great Canada Day weekend and 4th of July!