The first full week of trading in June was highly volatile for the grain markets, as the complex whipsawed around on continued planting concerns (namely Prevent Plant corn acres), weather forecasts, and fresh trade issues.

Simply put, there are a lot of factors impacting the market and that’s why we saw some wild intraday swings in trading. For the most part, traders seem to believe that regardless of the date, the U.S. crop will get planted, and saw profits taken off the board from last week.

Minneapolis hard red spring wheat was the only grain that made any major gains for the week. One of the reasons behind those gains is the continued strong demand for high protein – something Australia likely won’t be able to help supply for the third straight year. According to Australia’s Bureau of Meteorology, there won’t be much relief from drought conditions in the next three months. 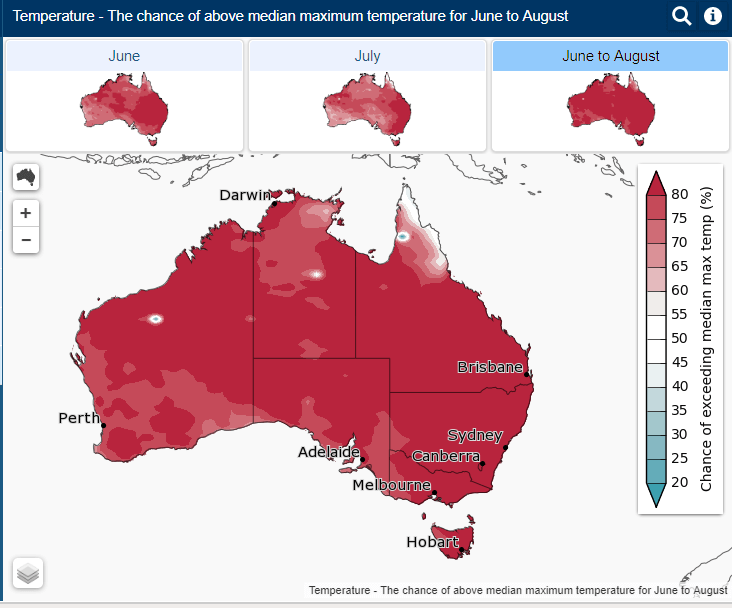 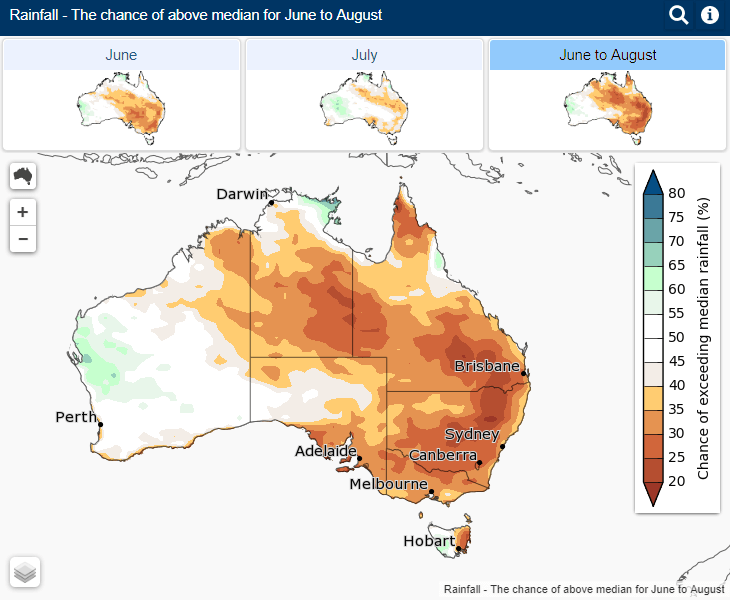 While most of the drought is in Eastern Australia, this is also where the majority of Australia’s higher protein wheat is produced. We’ll see in next Wednesday’s crop report from ABARES if they’re acknowledging said drought yet. Since we know that Australia is already importing high protein wheat from Canada, the third year of drought might make them a consistent buyer from Canada in the 2018/19 season. Very concretely, the dry weather would be bullish for Canadian barley and spring wheat prices.

The second major reason for the increase in spring wheat prices is that it’s also getting dry in major spring wheat growing areas of North America, namely Western Canada and the northern parts of Montana, North Dakota, and Minnesota. More specifically, the majority of the Canadian Prairies have “received less than 60% of normal precipitation over the past six months” according to Agriculture Canada’s drought monitor. As of last Friday (May 31st), more than one-third of Western Canada was in a state of moderate to extreme drought. 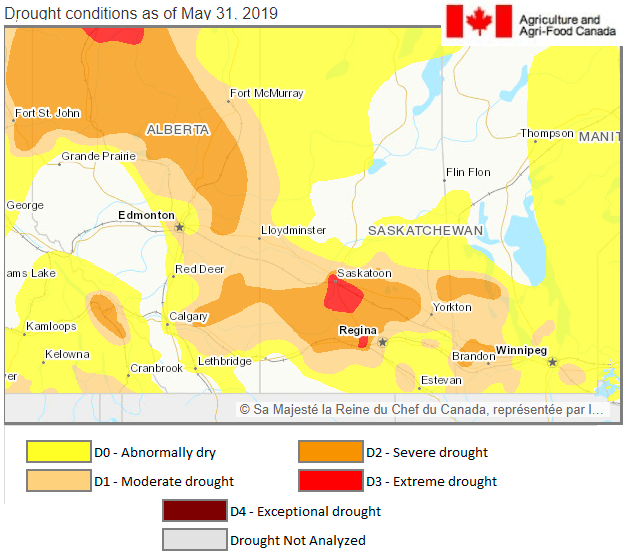 Most of Alberta and western parts of Saskatchewan received some moisture relief towards the end of this past week but dryness is still an issue the further east you get. There were rains in the forecast for eastern Saskatchewan and most of Manitoba, but it now looks like only the latter will see precipitation. The translation of all of the dry conditions until now has been that most crops are behind their averages in Western Canada in terms of their development/growth. This has certainly helped hard red spring wheat prices find some strength.

Canola prices have also been resilient, as, despite a slowdown in exports, Mother Nature hasn’t been the greatest nurturer in getting the crop going. Exacerbating the situation is that, with the dry conditions, flea beetles and cutworms are having a grand ole’ time, snacking on plants that have been slow to develop. Conversely, hurting canola prices has been the strength of the Canadian Dollar this past week. Ultimately though, with trade issues (read: politics) with China still in the way, this weather rally for canola prices has a maximum of another 5% to go and then it’s done. Of course, if China reinstates some import licenses, then I think you’ll see canola prices go for a real, healthy run.

It’s the opposite situation in corn prices though, as the conversations has switched from whether the U.S. crop will get in, to what yields and corresponding production we’ll see. A Farm Journal survey this past week said that 20% of responding farmers would Prevent Plant 50% of their corn acres! Granted, the sample size is just 1,000 farmers, but that’s still a good barometer of where things sit in terms of Prevent Plant.

This in mind, drier weather in the Eastern Corn Belt is finally showing up and farmers in Ohio, Indiana, and Michigan – all places that are well behind in planting corn – are aggressively getting into the field. Illinois is still wet, especially in northern parts of the state. We won’t know the impact of this increased productivity until next Monday’s crop progress report from the USDA. There are also some rumours that the USDA will account for the late start in their June WASDE report, out Tuesday, June 11th. 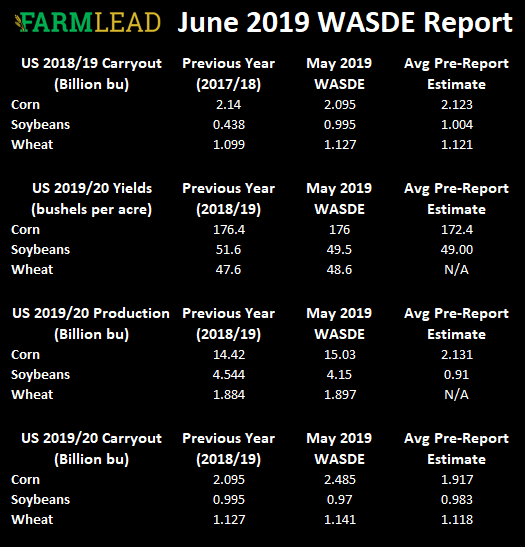 Usually, the June WASDE is a bit of a staller, as the USDA tends to wait to see what sort of damage or support May gave to the crop and share it in the July WASDE. But with only 67% of the U.S. corn crop planted through Sunday, June 2nd, and estimates that only 80% will be done by Sunday, June 9th, you must guess the USDA will acknowledge this in some way. Already the market is expecting some bullish numbers compared to what they put out in May. What also might support corn prices next week is that the Corn Belt is going to see temperatures significantly below average through the middle of June, which could be a detriment to crop development.

As mentioned, I think we’re moving from a weather market into a yield debate. Therein lies the true rallying call for corn prices in that, U.S. corn yields are unlikely to come close to the USDA’s current forecast of 176 bushels per acre (bpa). I’ve seen estimates as low as 160 bpa, but I think we’re probably going to end up with an average U.S. corn yield somewhere between 163 and 168 bushels per acre by the January 2020 WASDE when final numbers are released. If this is realized, and corn prices continue to trek higher, one must intuitively ask, when will demand fall off (AKA demand rationing)?

You certainly know there’s going to be more wheat going to U.S. livestock feed rations if corn stays at these levels or higher. Comparably, you’re seeing the impact on feed grain prices in Western Canada, as this week on the FarmLead Marketplace we saw feed barley trading above $6 CAD/bushel delivered into Lethbridge for old crop supplies. If you have some old crop barley, now is the time to be posting it as, while the possibility of no rain could certainly help prices a bit, the downside risk is more significant.

As a reminder, grain price rallies get built up slowly over a couple of weeks or even months, but once the top is hit, it only takes one or two weeks for a lot of those gains to be erased. If you don’t believe me, just remind yourself of what happened in May and June 2017 for hard red spring wheat prices, and then what happened the second week of July 2017 (hint: the highs were long gone just a week after they hit!).

Pulse School: How High Will Pea Acres Go in ’16?