Grain markets turned lower for the second straight week as the complex prices in some better weather and the impact that trade war payments might have on the bottom lines of U.S. farmers. For Mother Nature, expectations are that August weather for the Midwest will bring more hot, dry conditions, which should certainly get the attention of the bulls (but likely only come into play once the calendar actually flips to August).

The U.S. Wheat Quality Council’s crop tour took place across North Dakota and Minnesota this past week, with the goal of understanding what durum and wheat yields are going to be. The crop tour took scouts through 356 spring wheat fields and consensus was the early-planted stuff looks okay, whereas the late-planted fields have the most potential, but they also face a higher risk of getting hit by frost. With the final counts put together, the Wheat Quality Council says that this year’s average U.S. hard red spring wheat yields should come in at 43.1 bushels per acre. That’s up from last year’s crop tour average of 41.1 bushels per acre, but below the five-year average of 44.7 bpa.

For comparison, North Dakota’s Agricultural Statistics office said in a July 11 report that spring wheat yields in the state would average 47 bushels per acre this year, down 2 bushels from last year. With 6.4M acres of spring wheat seeded in North Dakota in 2019 (down 1% from last year), expectations are that farmers in the state will harvest 5% less than last year with 301M bushels getting combined ( or 8.19 MMT if converting bushels into metric tonnes), down 5% year-over-year. In Minnesota, the local statistics office says that average wheat yields, as of their July 11 report, are looking closer to 62 bushels per acre, up 3 bushels from last year. With spring wheat acreage down 6% in the Gopher state year-over-year to 1.48M acres, 2019 wheat production should come in 1% lower from 2018 at 91.8M bushels (or 2.5 MMT).

The crop tour also took the scouts through 15 durum fields, which isn’t all that statistically significant, but one should remember that North Dakota farmers seeded a record-low 700,000 acres of durum this year. For average durum yields, the crop tour says that it’s looking like 32 bushels per acre, which is well below the five-year average of 40 bpa and last year’s results of 39.3 bpa.

Comparably, for Canadian durum yields, Agriculture Canada is estimating things to come in at 38.36 bushels per acre, slightly below the five-year average of 39 bpa. However, because seeded acreage of durum in Canada is down 21% or nearly 1.3M acres from last year, total Canadian durum production is expected to come in at 5MMT, down 13% or 745,000 MT from 2018. This is mainly because last year’s durum yields were well-below average at just 34.8 bushels per acre. 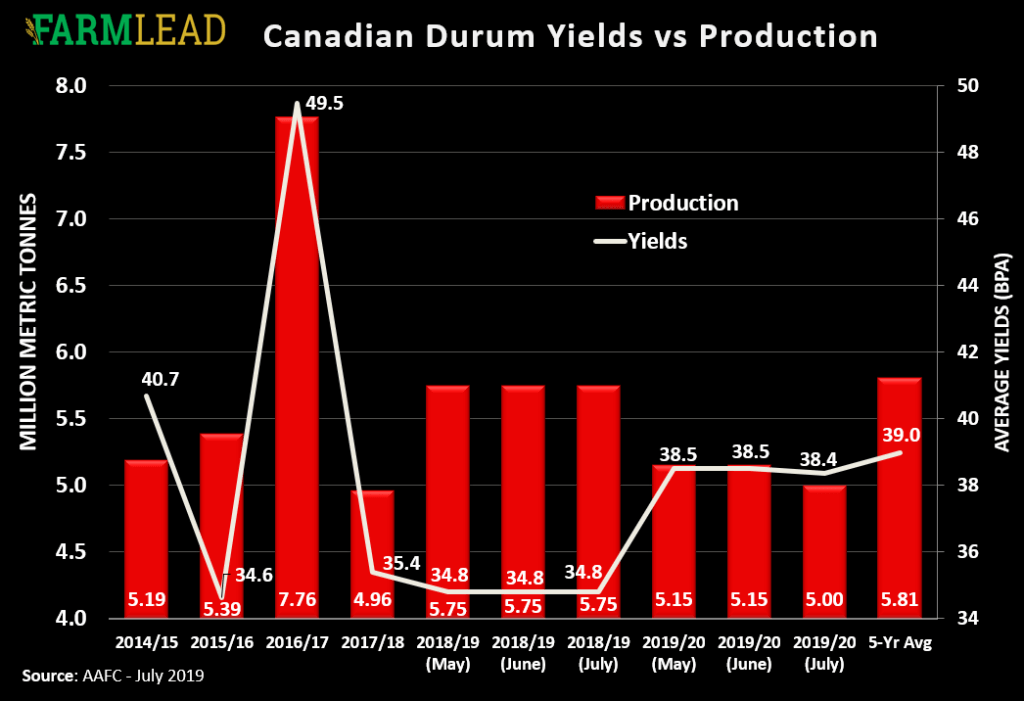 Heading back into the U.S., with the late-planted corn crop, the heat stress during pollination could be very detrimental to yield potential. Gro Intelligence has a multi-factor crop yield prediction equation, that’s mainly rooted in NDVI maps to measure vegetative state. That said, this year, the data firm is estimating that average U.S. corn yields will come in at 159.6 bushels per acre as of Wednesday, July 24th. Compare this to the USDA’s current estimate from the July WASDE report of 166 bushels per acre. Gro Intelligence notes that, while there were 180 counties across the United States last year that saw corn yields average more than 200 bushels per acre, this year there will be fewer than 10. Specific to the Corn Belt, they mentioned that vegetative health is the lowest it’s ever been for this time of year in Illinois, Indiana, and Ohio.

While an average yield below 160 bpa would certainly bullish for corn prices, what hasn’t been helpful is the slowdown in demand. Given the high corn prices, we know there are certainly some substitution effects taking place in the feedstuffs market, with more wheat going into livestock rations. We also know that ethanol processors are reducing production as margins are thinning amidst the great supply in the market. What’s pretty significant though has been the slowdown in U.S. corn exports, which, at 45.3 MMT, are now tracking nearly 8% behind last year’s pace through Week 46 of the U.S. crop year. 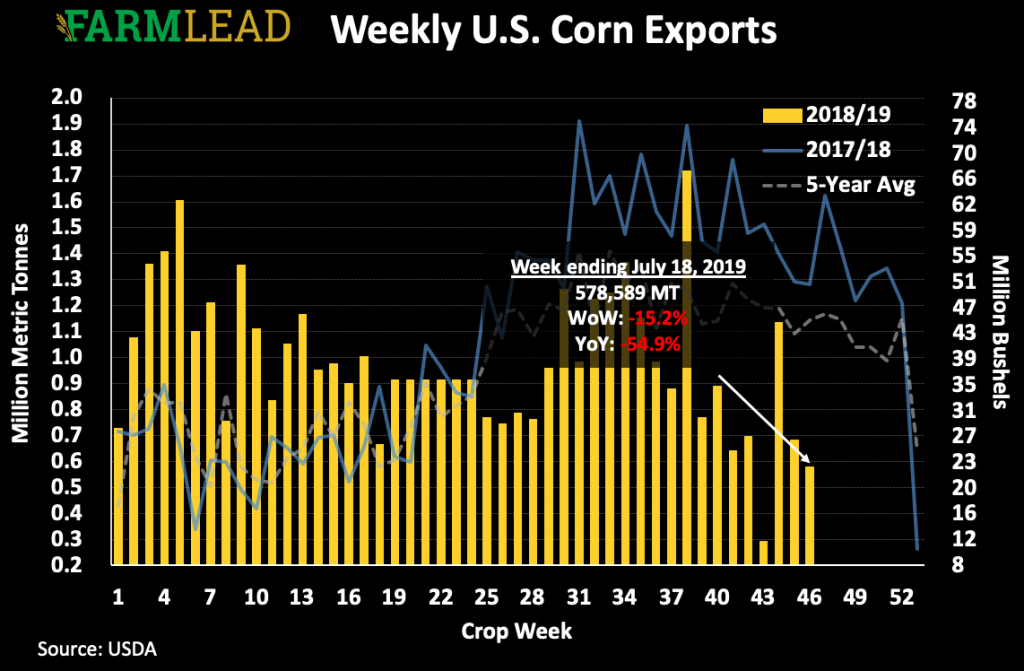 For other crops, soybean prices are also following weather forecasts, but it’s expected that we’ll find a low before the next WASDE report on Monday, August 12th (if we haven’t already seen it). Similarly, with crop development a bit behind in Western Canada, canola prices will also follow the weather, but should track alongside soybean prices as the oilseed complex remains rangebound for the next little bit. Canola prices have been having a tough time getting off its downward trend, but recent heat in Europe putting stress on the rapeseed crop there has helped a bit. The Canadian dollar dropping below 76¢ USD this week is also helping canola prices stick around the $450 CAD/MT level on the futures board.

Last Friday, Agriculture Canada shared its most recent estimates for the upcoming 2019/20 crop year. In most of these reports, I’ve been eyeballing the canola numbers, especially after AAFC put out an ending stocks number of 5.3 MMT in their May publication. However, Ag Canada dropped their estimate for Canadian canola carryout for the second straight month. Despite the 1.325 MMT drop in forecasted 2019/20 stocks over the last two months, the AAFC’s estimate for canola prices has stayed the same. 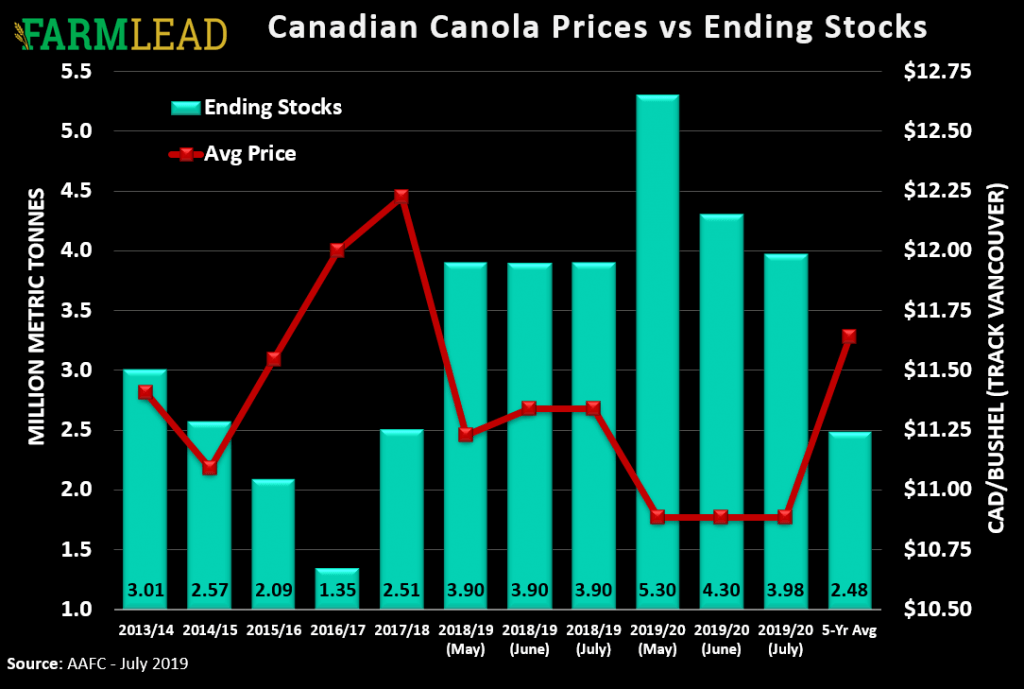 In the same July report, Canadian government officials lowered 2019/20 anticipated production by 325,000 MT but did acknowledge that there could be more cuts yet. Specifically, Agriculture Canada wrote,

“Soil moisture remains deficient across large parts of Manitoba and Southern Alberta. Yields will be more dependent than usual on rains during the months of July and early to mid-August. AAFC is still assuming trend yields with any revisions to yield estimates likely to be downwards.”

While rain showed up just in the nick of time, Western Canadian crops are far from the bin, especially canola. I think that, indeed, Ag Canada’s current average yield estimate of 39.43 bushels per acre could be on the low-side of things. Accordingly, given the decline in canola prices from their June rally, we should expect to see a little bit of rebound in the coming weeks. Of course, a resolution to the trade dispute with China would help, with my bet that it could easily prop up canola prices on the futures board by about $25 – $40 CAD/MT. Should there be a resolution, cash canola values would likely follow the futures higher accordingly, albeit basis would probably widen a bit (as is usually the case in any crop when the futures rally).