Grain Farmers of Ontario has announced a year-long project to expand Ontario grain and oilseed exports to the European Union. The project is funded in part by the Canadian Agricultural Partnership.

The increased focus on the region stems from the signing of the Comprehensive Economic and Trade Agreement (CETA) between Canada and the European Union (EU), which removed tariffs that were previously placed on Canadian corn and low protein wheat.

“Our goal is to promote Ontario as a top supplier for grains and oilseeds and to share our sustainability story,” says Nicole MacKellar, manager of market development with Grain Farmers of Ontario. “As our production grows, finding new export markets becomes increasingly important.”

The project includes an outgoing trade mission with stops in Brussels and the United Kingdom to meet with agricultural organizations and potential buyers, as well as an incoming mission that will see European agricultural journalists come to Ontario to learn more about grain production in the province and the industry’s sustainability practices.

Grain Farmers of Ontario are also developing new brochures that will provide an overview of Ontario grains and oilseeds production and highlight technological and genetics-based improvements that support sustainable production, the organization says.

According to MacKellar, sustainability is very top of mind in the EU, and Ontario grain production has many of the attributes that resonate well in the European market, including increasing land use efficiency, reducing soil erosion and decreasing climate impact. Britain’s pending exit from the EU presents new opportunities for relationship building as the island nation currently imports 70 per cent of its feed protein, according to GFO. 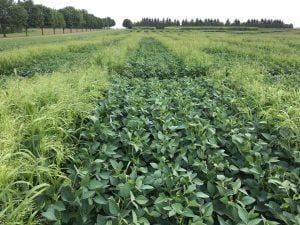 Planting Corn in Alberta? Here’s What You Need to Know