Grain markets ended the week lower as the complex saw selling on some better weather and growing conditions for a North American crop that continues to be behind in terms of development. If it wasn’t for a good rally on Friday, we would’ve seen an even further departure on the futures board than what you’re seeing below. That being said crop progress and development remains top of mind for the complex. The delayed start to Plant 2019 and subsequent weather has made this growing season in North America anything but normal.

We certainly know that crop development across North America is tracking well behind their long-term averages. I spent a few days earlier this week touring around Illinois, talking with farmers and grain buyers alike, and there are certainly production concerns on the minds of many. Just some highway checks show crop progress is behind in their development.

However, investors and speculators also know that recent and forecasted weather is going to help get the crop growing, hence the bearish nature of the weekly performance of futures markets. Given the moisture profile for much of the Midwest, the heat and humidity through the next few days will help stress a crop that is, quantitatively, now about a week or two behind their normal pace. 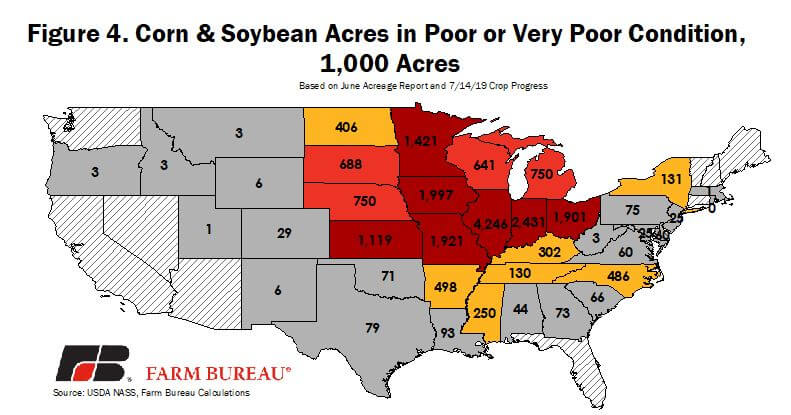 While the heat is hitting the eastern half of North America through this weekend, the forecast is expected to change with Western Canada starting to get some warmer temperatures as early as next week. Those looking to work on their tans in the Canadian Prairies will rejoice, but there’s some conflicting sentiment in the crop progress reports as to how the heat will be received. 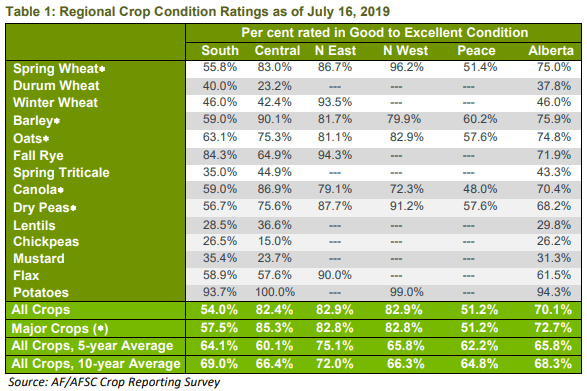 While rains over the past few weeks have certainly helped bring the growing season precipitation accumulation back up to more normal levels, Agri-Canada says it’s still pretty dry in southern Alberta and many parts of Manitoba. What this translates into, from a grain markets perspective, is a lot of production uncertainty (similar to that of the American Midwest). 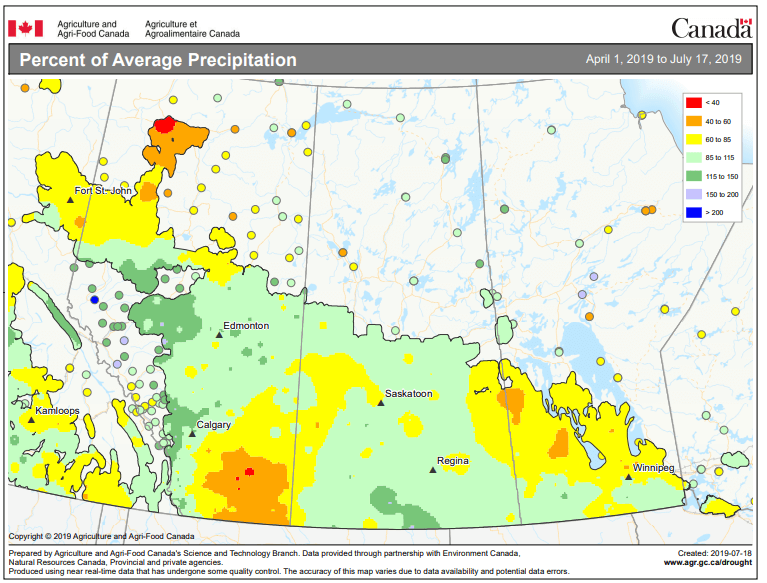 If we look outside of North America, it’s worth nothing that moisture for pulses in India isn’t looking all that great Across the entire country, rainfall remains 20% behind the normal that they have by this time of their rainy season. Quite simply, moisture events have been spotty across southern, central, and western areas of the country. For pulses, acres planted for the summer kharif crop are tracking 12% behind last year’s pace and 13% behind the five-year average. While it’s estimated that India will produce 23 MMT of pulses this year, this will wholly depend on additional (and consistent) rains for the next 2.5 months.

In Europe, the wheat harvest is progressing and numbers are looking pretty good despite the late-June heatwave that hit the continent. The above-average warm weather in the E.U. caused analysts to trim their production expectations in June but now numbers are being revised higher again as combining accelerate. Through July 15, 33% of the French soft wheat crop was in the bin, and while that’s nearly half of the 66% seen a year ago, it is a marked improvement from just 9% combined the previous week.

Overall, the next few weeks of crop progress reports will be watched closely by grain markets, both in North America and abroad. Volatile weather will continue to create volatility in said grain markets but it’s all to just get us to the August WASDE report on Monday, August 12th. In that report, not only the is the USDA going to give us re-surveyed seeded acreage data from the inaccurate June report, but also satellite and FSA certified acreage data. For FSA numbers, these usually don’t get shared until October. On the outset, one could posit that the USDA is trying to overcompensate for the lack of good data in their July WASDE.