Grain markets found some strength in the second week of July as the monthly report from USDA showed average U.S. soybean yields falling by one bushel per acre to 48.5. The lower yield meant production was felled by 375 million bushels, which obviously helped soybeans find a bid. Follow-on support for other crops and stronger demand for U.S. wheat helped push winter wheat prices up a bit. This in mind, everyone and their mother all agree that we should be taking this report with a grain of salt.

Globally, corn ending stocks were raised in the July WASDE report by nearly 8.5 MMT to just under 300 MMT, mainly because of bigger production in the United States and Argentina. It was the opposite though for soybeans as global carryout was lowered by 8.13 MMT, mainly because of the 8.3 MMT reduction for the 2019/20 American soybean harvest. 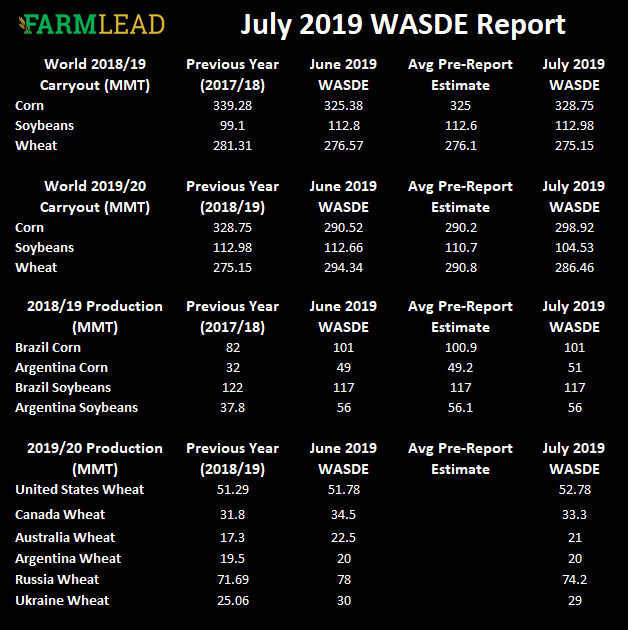 In South America, the corn crop is looking bigger. While Brazil’s corn harvest was stayed at a record 101 MMT, Argentina’s 2018/19 corn harvest was raised by two MMT to 51 MMT. I mentioned in Wednesday’s FarmLead Breakfast Brief ahead of the July WASDE that the country’s official corn production estimate in Argentina was raised to 57 MMT, so maybe the USDA will make further additions?

For South American soybean production, nothing changed for 2018/19, but it’s worth reminding you that the USDA is currently expecting next year’s harvest to come in at 53 MMT in Argentina and a record 123 MMT in Brazil.

Digging into the oilseed complex further, the USDA literally titled their global oilseed report, “Market Uncertainties of 2018/19 Haunt 2019/20 Prospects.” This is an obvious reflection of the U.S.-China trade war, notably how many South American soybeans have been heading to China, instead of boats from the United States. In fact, the USDA increased Brazilian soybean exports for 2019/20 by 1 MMT to 76 MMT. Conversely, the USDA lowered 2019/20 U.S. soybean exports by 2.041 MMT (or 75 million bushels) to 51.03 MMT.

As it relates to canola for the current 2018/19 crop year, Chinese imports were dropped in the July WASDE report by 150,000 MT to 3.85 MMT, with the USDA noting a “slowing pace of trade” for the oilseed to the People’s Republic. Australian 2019/20 canola exports were lowered by 400,000 MT to 1.9 MMT, indicating an opportunity that either Black Sea rapeseed or Canadian canola could take advantage of. That said, 2019/20 Canadian canola production is still pegged by the USDA at 20.1 MMT, a number that I think is about 1.5, maybe 2 MMT too high, given the canola crop’s condition in Western Canada right now.

On that note, the heat has been noted by the USDA for wheat production in Canada as they lowered their forecast in the July WASDE report in the Great White North, as well as in Australia, Russia, and the Ukraine (as shown in the table above). On the trade front, we saw a bit of an update for wheat exports, with Australia’s 2019/20 shipments lowered by 1 MMT to 12.5 MMT, while US wheat exports were increased by 1.37 MMT to 25.9 MMT. Europe’s wheat exports were also increased by 500,000 MT to 27 MMT, but Russia was dropped by 2.5 MMT and Ukraine by 500,000 MT, a reflection of the expected lower wheat production in the Black Sea.

With the global picture out of the way, a lot of traders who were focused on the U.S. numbers are already pointing towards August as the real report to focus on. In the next WASDE report, out on Monday, August 12th, the report will include updated seeded acreage data from the USDA.

That’s important because, in the July WASDE, the USDA actually raised 2019/20 U.S. corn production! Combined with weaker demand and a subsequent bigger 2018/19 carryout, 2019/20 endings stocks climbed back above two billion bushels. Specifically on the demand front, we know grain is just sitting around and physical trading volumes are thin. One datapoint to consider that backs this up is that grain movement on rail has declined year-over-year for 4 consecutive months, including a drop of more than seven per cent in June. 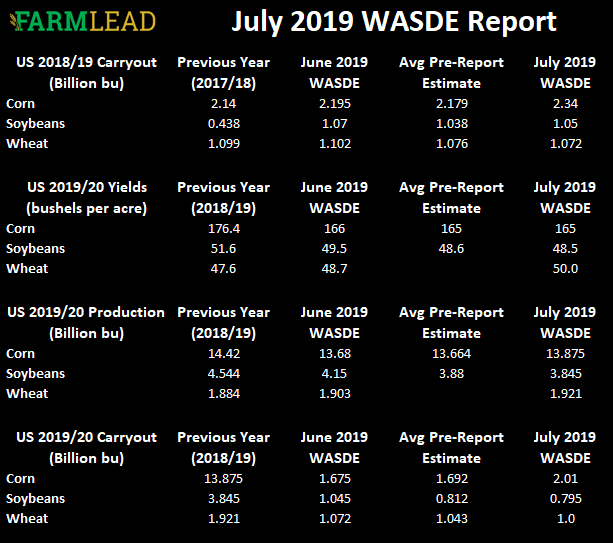 U.S. wheat yields were raised by 1.3 bushels per acre to 50, but some stronger demand, both domestically and internationally (as mentioned) should offset the increase in production. As such, 2019/20 U.S. wheat ending stocks were lowered by 72 million bushels (or 1.96 MMT if converting bushels into metric tonnes).

Overall, while grain prices finished the day in the green, yesterday’s July WASDE report should be taken with a grain of salt. This is mainly because of the inaccurate data in it, especially for the U.S. side of things. We know seeded corn acres will be lowered from the 91.7M suggested in the June acreage report. There is also a good chance that corn yields will also be lower.

On the flipside, soybean acres are likely to increase, but, given the current quality conditions, we should probably expect yields to be reduced from the 48.5 bushels per acre that was suggested by the USDA. What this all does is point to Monday, August 12th. This is when we’ll see the August WASDE report published, and with some major acreage changes in the U.S., it’ll be pretty hard to yawn at it.