The official leader of the opposition Andrew Scheer was in Saskatoon, Sask., last week and gave a speech to both the Saskatoon chamber of commerce and at the annual general meeting of the Dairy Farmers of Canada (DFC).

While at the DFC meeting, the topic of the new NAFTA/USMCA was brought up. Scheer tells RealAgriculture the Conservative Party of Canada’s aim is to be more transparent going forward, and, that under a CPC leadership, they will work with stakeholders prior to negotiations.

“We’ve seen a lot of decisions made by this government where they haven’t been consulting stakeholders, (and) they’ve been imposing changes,” Scheer says. “I wanted to send the signal that conservative government will work with our stakeholders, and that we’ll design policies that fit their needs and address their concerns.” (story continues below player)

When asked about delays in USMCA ratification, Scheer says he believes the old 25-year-old agreement is a good one. Adding that the, “longer we can operate under NAFTA, so much the better.” He says that Canadians want certainty, and that if other countries are on board with the new deal, then it will be the one in their favour.

Listen to the full interview above with leader of the Conservative Party of Canada, Andrew Scheer, and RealAgriculture’s news lead, Jessika Guse. 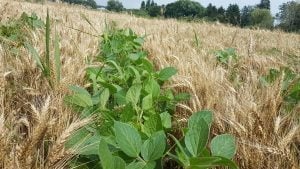 Mark Burnham is doing his best to promote more wheat acres in Ontario. It can be a tough sell, but there's no disputing the soil health benefits of having wheat in the rotation. The Cobourg, Ont.- farmer, who runs a mixed farm with his family, believes a corn-soy-wheat rotation, with some hay and cover crops,…Read more »

What Should We Expect From NAFTA Renegotiation?