In a shortened week of trading due to Canada Day and the Fourth of July in America, trading volume was light and the oilseeds complex saw the worst performance, highlighted by soybeans dropping almost 2% on Friday alone, mainly attributed to the ongoing trade dispute with China and big stockpiles revealed last Friday by the USDA. Granted, there were some solid export sales numbers this week for U.S. soybeans, it wasn’t enough to keep traders from taking profits on Friday.

While we’ve passed through the middle point of the calendar year, we’re just hitting the core time of the growing season for most crops in North America. That being said, there is a lot of concern about production potential in the United States.  After basically two months of ongoing rains, some better weather is in the forecast for most of the Corn Belt, with temperatures average or above-average over the next 10 days.

On the other side of the border, after some timely rains in mid-June, cereal crops are looking pretty good. However, for some other crops, namely pulses and oilseeds, it might’ve been too little, too late. For example, after I drove through about half of Saskatchewan the first week of July to visit with relatives, I am extremely doubtful that AAFC’s current average yield estimate of 39.4 bushels per acre will be realized. Of course, we could have a late summer/fall that helps out a canola crop in many places that is about 2 weeks behind development. If not, we might see another harvest with a high green count.

While we tend to talk about the major futures-related crop in this weekly report, I wanted to provide a bit of a visual of how some other crops are doing and the major factors impacting it. Staying in the oilseeds, flax prices have picked up recently, which can be largely attributed to seasonality, but also concern for how much production will come off this year not only in Western Canada but also in the Black Sea; the latter also saw a heatwave in June. 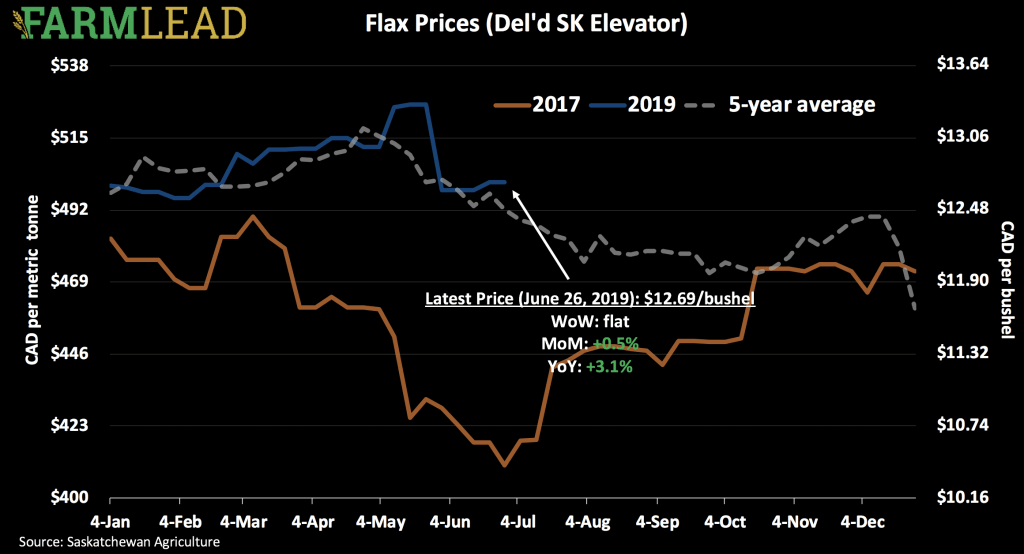 In the pulses, we’ve certainly seen lentils values rebound a bit from the harvest lows seen last fall. However, lentil prices are still well below the highs seen a couple of years ago. The main factor here continues to be India 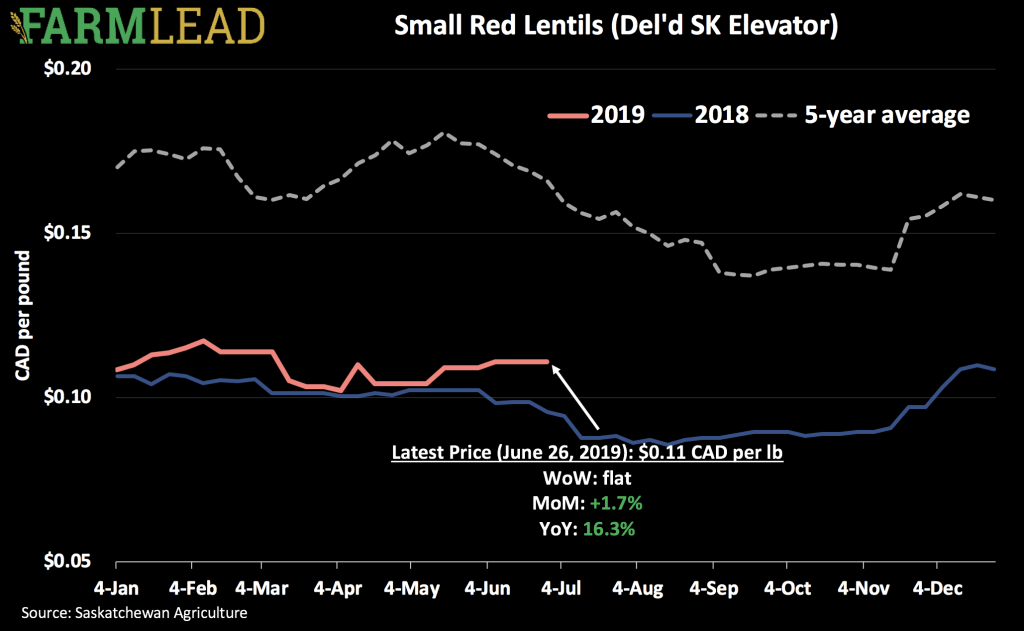 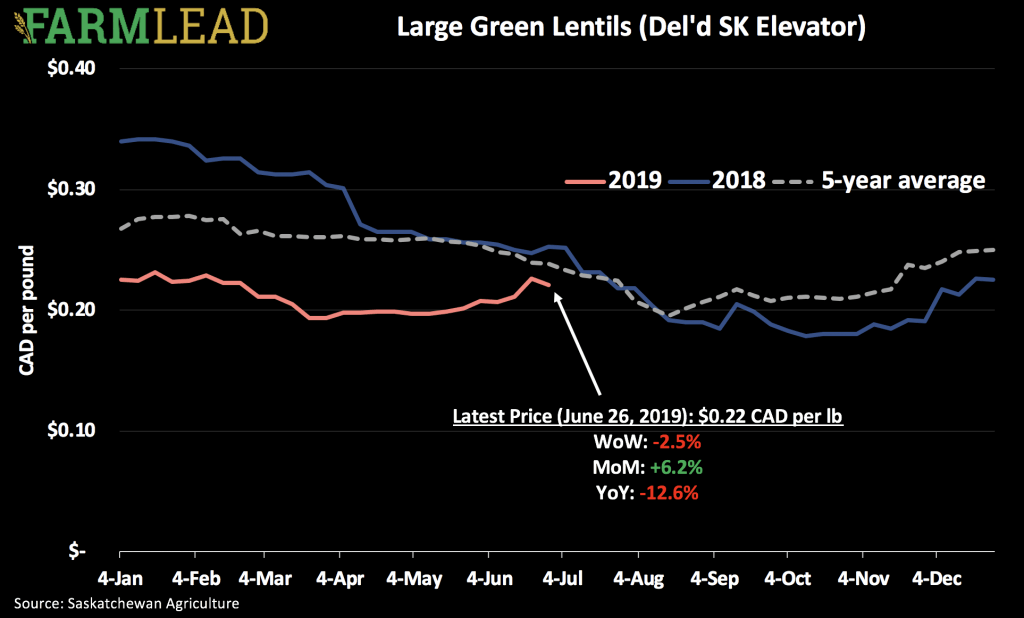 Yellow pea prices are below $7 CAD/bushel again in most places across the Canadian Prairies, thanks to some spotty demand and stronger-than-expected acres planted this spring. If India doesn’t continue to get the monsoon rains it’s been hoping for, then this would likely be the only change that India relaxes its import tariffs for pulses and yellow pea prices could climb. It’s worth noting that India has has again, for the umpteenth time, extended the fumigation exemption for Canadian imports.  On the flipside, there’s been a solid uptick in demand for green peas, especially old crop, with most product heading to Asia. 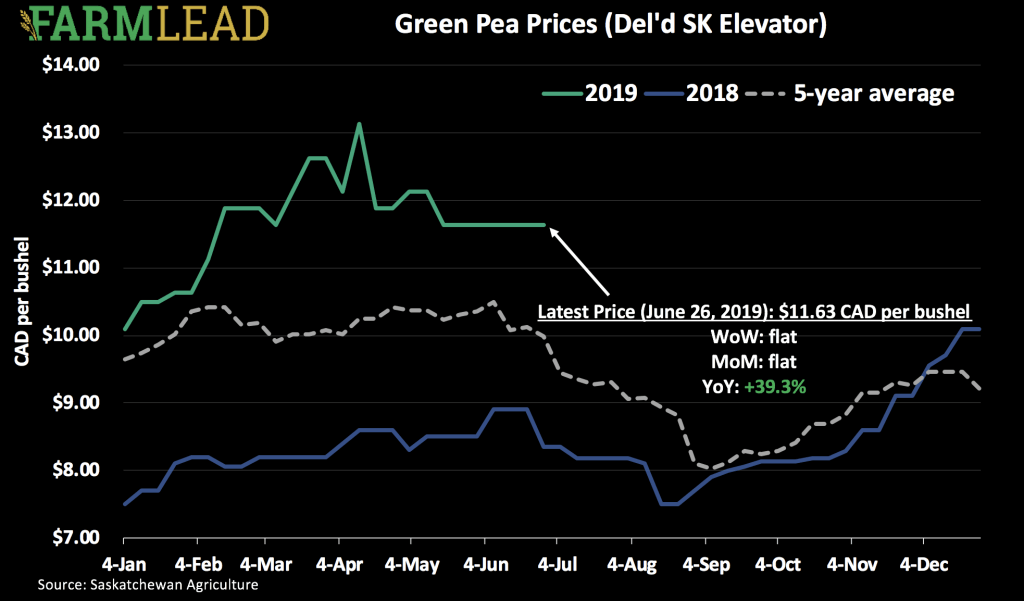 Finally, we end with feed barley, which continues to be one of the shining stars for Western Canadian farmers. While there was a bit of concern for production, most areas are seeing their barley crops growing just fine and new crop pricing has relaxed a bit. However, the demand structure for feed barley, both domestically and for export markets, is as strong as ever, and therefore, we’re seeing old crop feed barley prices delivered into Lethbridge at all-time highs (again). There is some bearish sentiment out there though that demand might suffer as a result of the Chinese ban on Canadian meat imports. 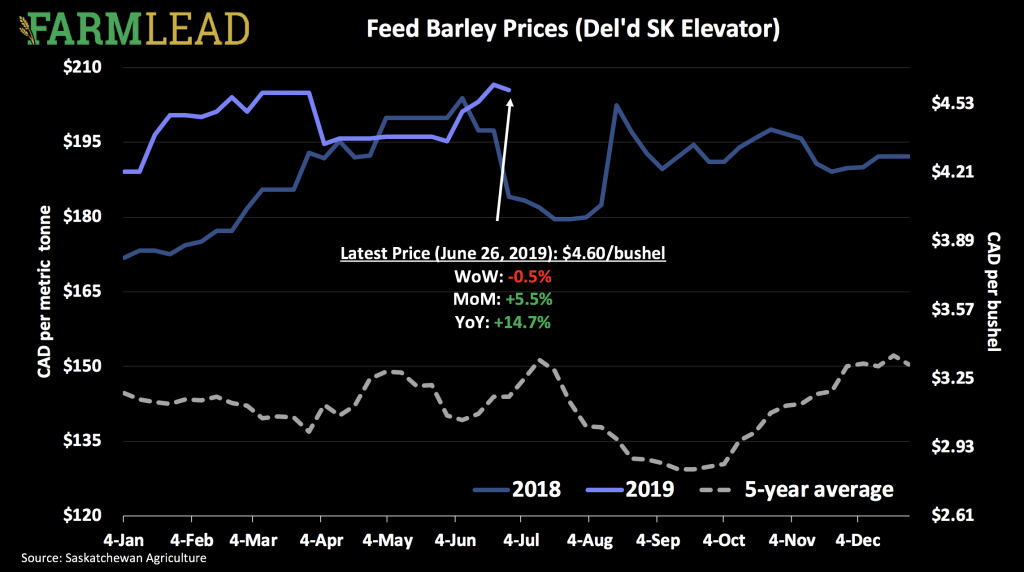 Overall, as we’re now into June, volatility in grain prices will subside a bit, unless there is some major trade issues resolved (pretty much, I’m just looking at you, China, regarding American soybeans and Canadian canola).