This week finalized a tumultuous month for grain markets with China, weather, and crop conditions owning the headlines. While most grain prices on the futures board were able to find some gains for the week, it was a bearish month for the complex. As the table below shows, wheat and corn prices took the hardest hits on this August. For context, August tends to be bearish as the harvest potential becomes a bit clearer and seasonal lows are usually seen.

While Harvest 2019 is picking up speed, so is Mother Nature’s interest in winter. Specific to northern U.S. states and Western Canada, the threat of frost is very real. This includes some single-digit Celsius temperatures this past week in central Alberta and next week across the Canadian Prairies. On the flipside, the Australian Bureau of Meteorology released an updated three-month forecast, and it’s expected that drought conditions will continue to persist. Accordingly, the reality of the calendar is starting to look more and more bullish for grain prices. 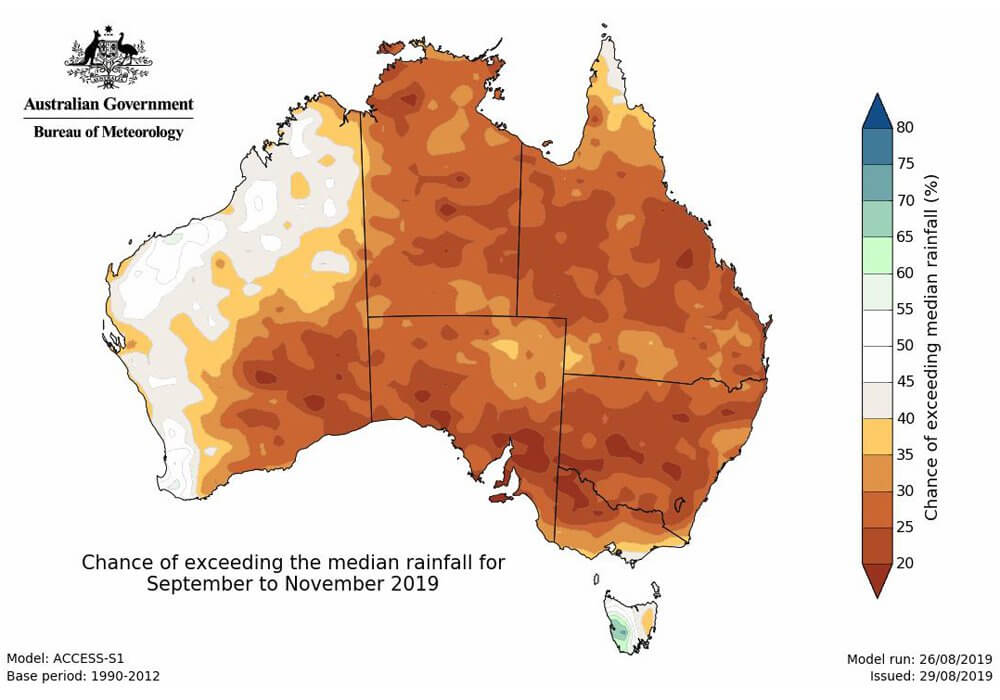 Through the Midwest, forecasters are expecting to see lows in the 50s (Fahrenheit) and highs in the 70s through the weekend, before staying in the 70s next week. The cooler temperatures could keep plants from maturing, which is significant, given quite a few crops were planted late to begin with and are trying to catch up in terms of development. Between this and some lower temperatures in the two-week forecast, it’s likely that one should prepare for taking off some wetter crops this fall. The silver lining is that natural gas prices are at their lowest levels in 3 years.

What’s also at multi-year lows is new crop U.S. corn and soybean export sales. Specific to soybeans, sales to China so far only account for about 5% of total purchases by all countries; historically (save for last year), China usually accounts for about half of new crop soybean purchases. Worth noting is that, as we end the 2018/19 crop year tomorrow, through week 51, total U.S. soybean exports for the season is tracking nearly 20% below the 2017/18 pace. 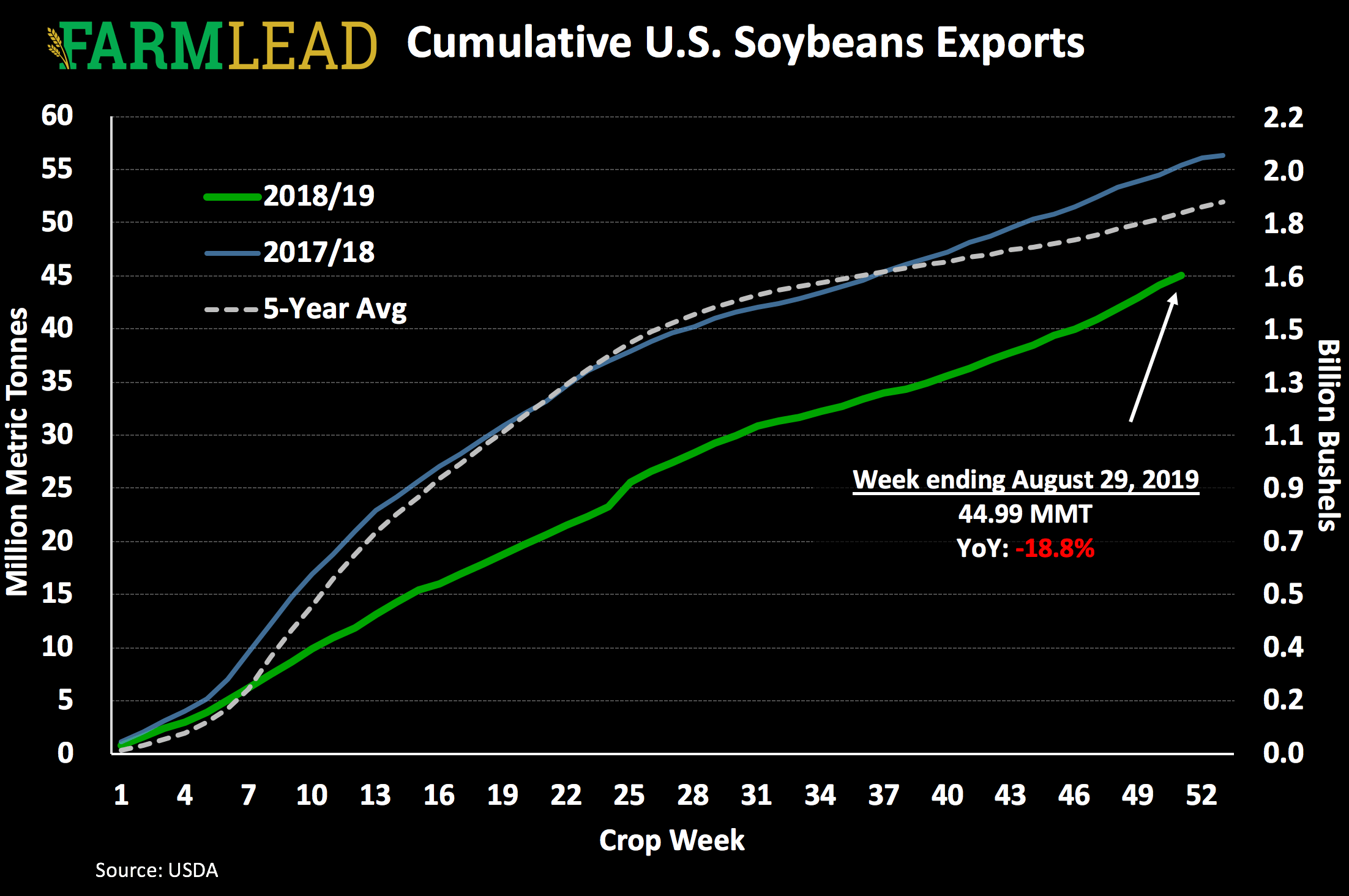 It might not all be bad according to ClipperData as they think August could be a month that swings even higher for soybean exports to China! Based on their estimates, total August soybean imports by China could come in near 10 MMT. Since the Chinese have been buying a lot of Brazilian soybean exports (thanks to the trade war), the country is starting to run a bit short of available supplies to ship out. That said, if China buys the same amount that they did from Brazil in the September to January period, ClipperData says China is going to about 12 – 14 MMT short.

Obviously, U.S. soybean exports make the most sense to fill that gap since Brazilian soybeans don’t start coming off until early January. While China has suggested that they have a ban of all U.S. ag products, it’s not exactly clear that this has materialized. Last week, China bought nearly 1,900 MT of pork, up from 220 MT the week before. The fact is, China is dealing with some serious food price inflation, including pork prices jumping 18% in just the past 2 weeks, according to the Wall Street Journal!  Importing more ag products is the only way to slow down said food price inflation in a fragile economy where consumers are pretty price-sensitive.

Switching focus, the highlight of this week for Canadian grain markets was the release of Statistics Canada’s first estimate of production for the 2019/20 crop year. In the compilation of its farmer survey, Statistics Canada is expecting wheat, canola, corn, and soybean production to fall year-over-year in the Great White North, mainly because of a smaller harvested amount of acres. Wheat and canola yields are seen falling in Saskatchewan, the largest producer of both commodities. On the flipside, more lentils, peas, barley, and oats than initially expected should keep some bearish pressure on the prices for these crops. 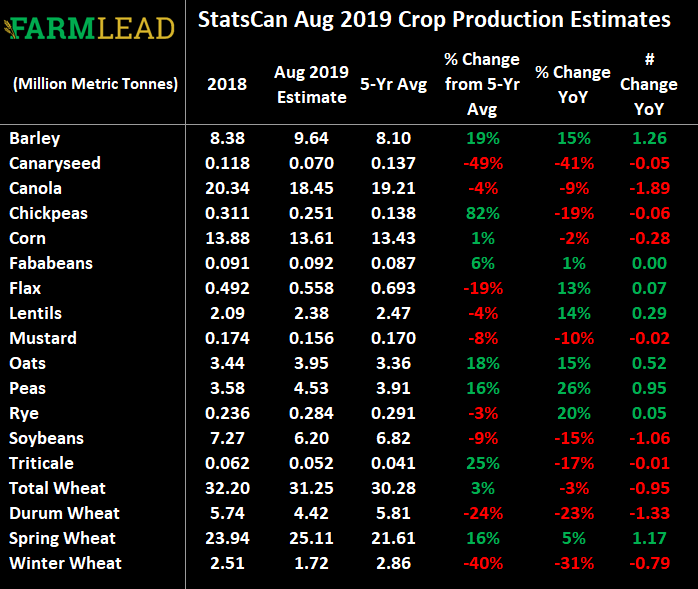 Comparably, earlier this month, the USDA’s attaché in Ottawa says that Canadian farmers will produce 32.65 MMT of all types of wheat. Given the size of the Canadian wheat harvest, trade issues between the U.S. and China, and drought issues in Australia, I’m hopeful that China will continue its bigger buying trend of Canadian wheat that it started last year. Through June, 2018/19 Canadian wheat exports to China has jumped 83% year-over-year to more than 2 MMT, the strongest since 2004.

Let’s keep StatsCan’s first estimate in perspective though: StatsCan usually underestimates all Canadian crops by an average of more than 7% in their August publication, relative to their final numbers in December. Leaning in, StatsCan is usually more accurate for crops with smaller production like chickpeas and flax, with August report being only 0.2% above and 3.2% below final numbers in December respectively. On the flipside, in their August numbers, StatsCan tends to underestimate Canadian canola and durum harvests by an average of nearly 19% and 16%. Accordingly, the canola and durum wheat harvests could, theoretically, be much larger than what’s currently estimated by StatsCan.