Grain markets had a tough turn of the calendar from July to August, as the complex dealt with a couple of factors that pushed it lower. From a performance standpoint, corn prices lost about seven per cent for the month of July, while soybean and hard red spring wheat prices basically ended July where they started. 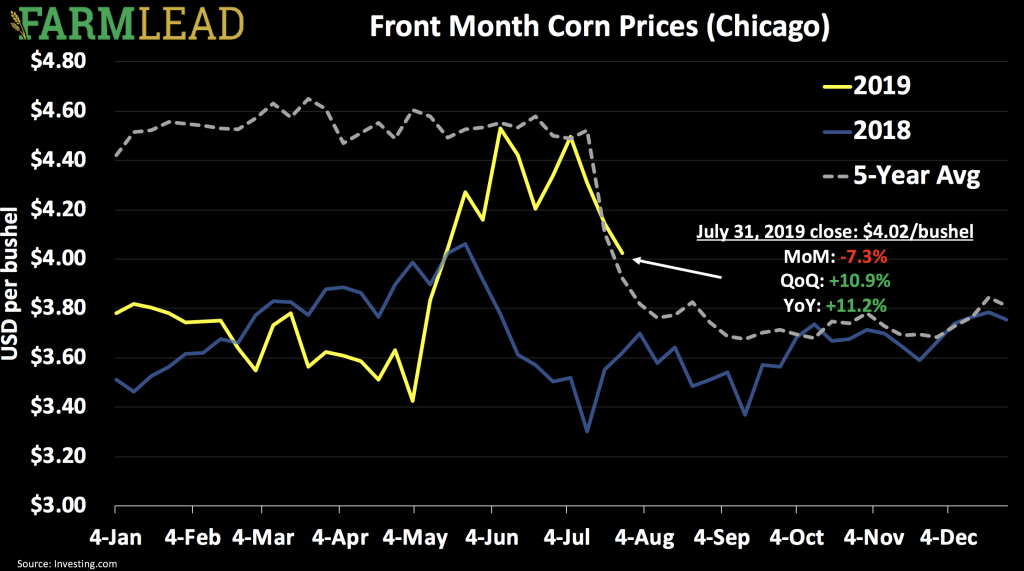 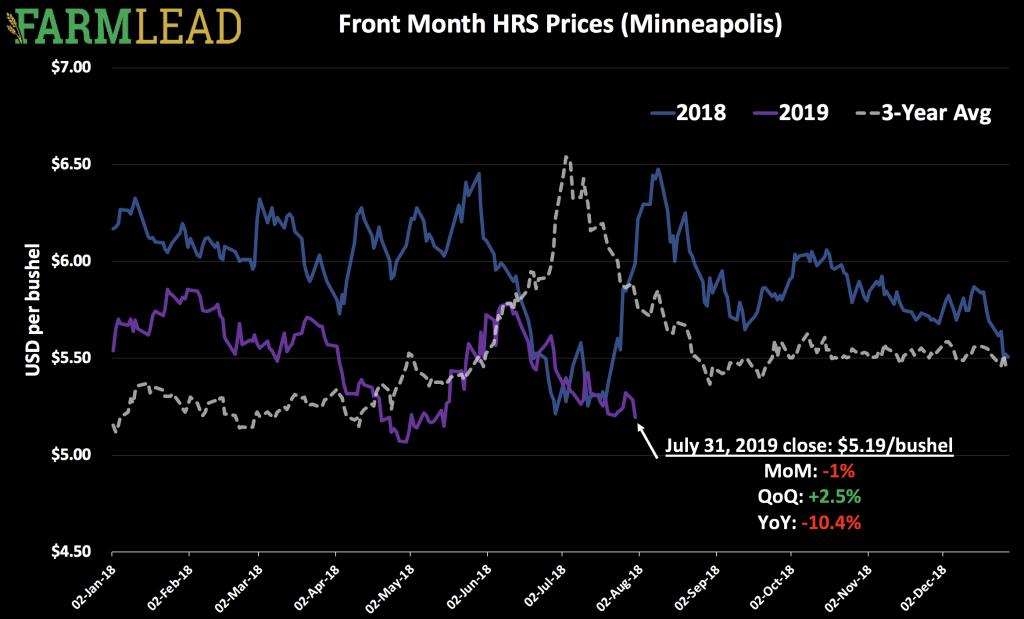 One of the main reasons for the drop in grain prices this past week was because U.S. President Donald Trump announced that the U.S. will implement a 10 per cent import tariff on the only $300 Billion of Chinese imported goods that haven’t been already taxed.

President Trump recently suggested that he thinks the Chinese will wait until 2020 to get a trade war deal done, mainly because that’ll be closer to the next U.S. Presidential election. However, with the trade war still firmly on, China has fallen from first to fifth in terms of ranking of the largest buyers of American food and agricultural products.

Also pushing grain prices lower was some weaker-than-expected U.S. grain export sales and a better (read: cooler) weather forecasts for most of the growing regions in the United States. On a related note, INTL FC Stone has updated their forecast for the U.S. corn and soybean crops, estimating average yields of 167.4 bushels per acre and 47.2 bpa, respectively (the USDA is currently at 166 and 48.5). This would add up just under 14 billion bushels of total production for corn (or 355.5 MMT) and nearly 3.75 billion bushels of soybeans (or 101.9 MMT).

Fertilizer and crop inputs player Nutrien says that their forecasting U.S. corn acres to jump significantly in 2020 to 95 million.  The firm is basing their estimate on how current December 2020 corn prices on the futures board is buying acres today. Should you see a bit of a rally in corn prices this fall due to production shortfalls (which I’m expecting), 2020 corn prices could easily get back up to the $4.50 level and indeed, should they materialize, I think that those values should be locked in aggressively by producers. This is mainly because, with 95 million corn acres, you can bet corn prices will fall back below $4 by next summer.

As a comparison, Brazilian firm Datagro estimates that the country’s soybean production this year (2019/20) will be a record of 125 MMT while the 2019/20 corn harvest would also be a new record of 104.3 MMT. This soybean production number, if realized, would be a 7% jump over the 2018/19 harvest, but it’s really on the back of planted soybean acres expanding by 2% year-over-year to a new record of 90.94M acres. This is certainly due to China buying more soybeans from Brazil.

Staying in Brazil, a recent frost has damaged the crop in the state of Parana, which means that Brazil will likely need to import more wheat this year. State government agency Deral estimates that total wheat production in Brazil will be 16% less than their previous estimate, with now just 2.72 MMT forecasted to be harvested. Before the frosts, the federal government estimated 7.2 MMT of wheat imports this year, mostly from Argentina. Ironically, it looks like the 2018/19 Argentina could harvest a record crop this year of around 21 – 23 MMT, up from the previous record set last year of 19 MMT. This is a function of acreage expected to expand by nearly 1.24M acres but also some good growing conditions and a favourable weather outlook going forward.

Coming back to North America, Drew Lerner of World Weather Inc. says that we should not expect an Indian Summer this fall in Western Canada and the U.S. Northern Plains. This basically means that the first frost is likely going to be an around average dates, which isn’t going to be a great thing considering that crops are one to two weeks behind in more than a few places, not to mention fields being quite stagey.

Despite the delay in crop progress, this past week’s Grain World crop tour in Western Canada estimates this year’s Canadian canola crop at 19 MMT off an average yield of 39.9 bushels per acre. Last year saw an average canola yield of 39.8 bushels per acre and total production of 20.3 MMT, but that was mainly because there were more acres planted in 2018 versus this spring. The crop tour also suggests that non-durum wheat yields would average 52.1 bushels per acre, or the same as last year.

One of the crops that’s surprised many farmers in terms of resiliency in dealing with the sub-ideal growing conditions is barley. Over the course of the past month, rain across Western Canada has brought down barley prices as buyers anticipate a better crop than once expected. 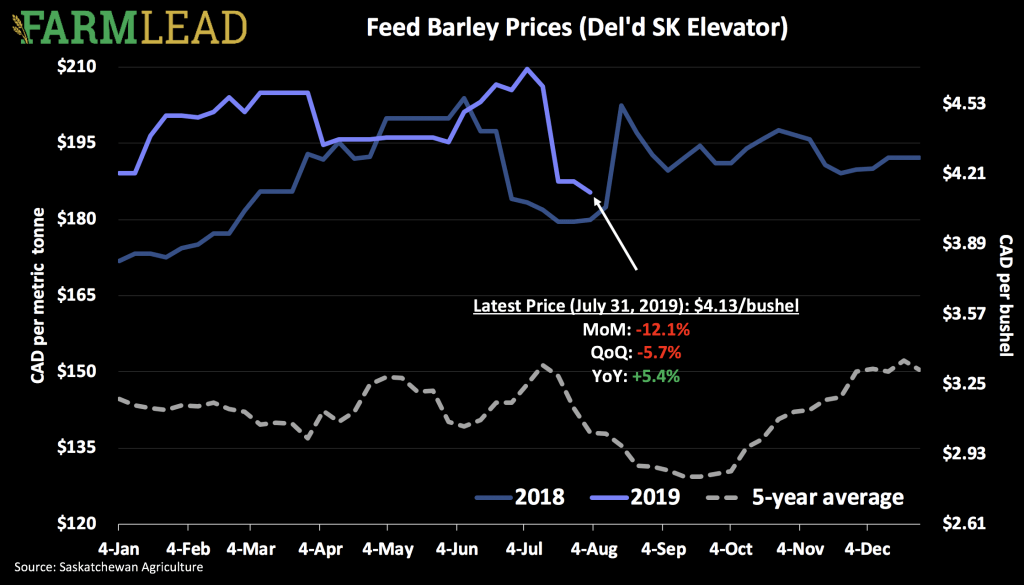 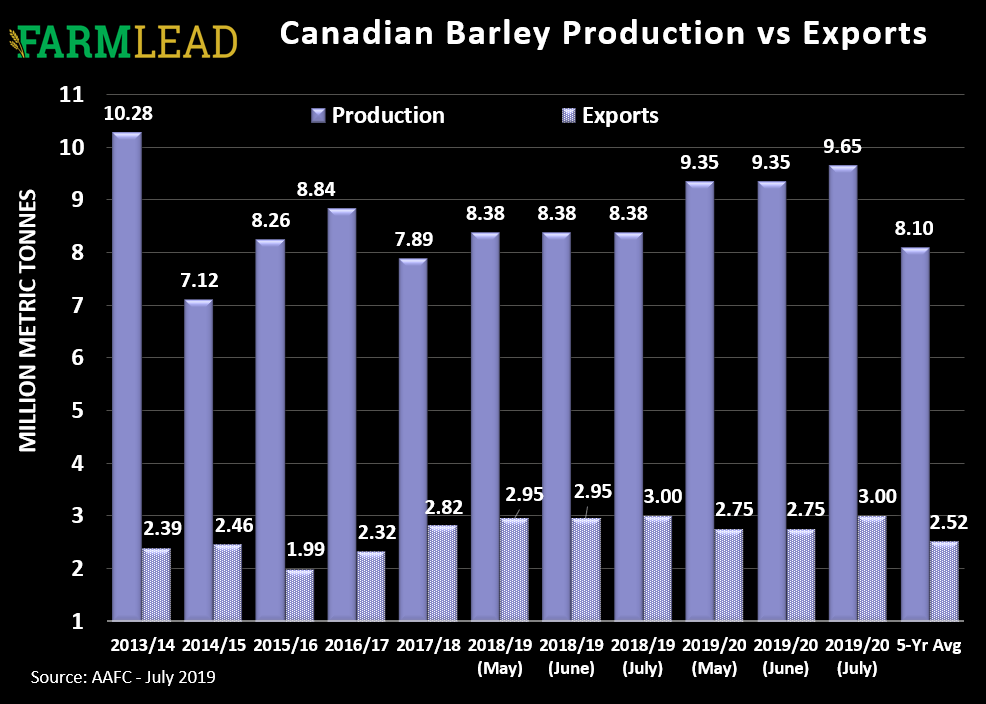 In Australia, drought conditions continue to be seen in the eastern-producing states, which is always where a lot of the barley demand is in the country-continent. However, given the strong run-up in barley prices last year, the USDA’s attaché in Australia is forecasting barley acres for the 2019/20 crop year in the Land Down Undaa to expand by about 12% over last year. This includes an expected record number of acres seeded in Western Australia at the expense of wheat, mainly because barley prices are paying better than that of wheat.

On the trade front, China continues to be the biggest buyer of Australian barley as they were responsible for more than two-thirds of all barley exports from the country through the first seven months of their marketing year (which starts November 1st). While total shipments have totalled 1.5 MMT less than the previous year, this is likely a function of the investigation that China has ongoing on Australian barley pricing. Japan is the second-largest market for Australian barley exports, but, like China, their shipments are down a bit year-over-year as well.

Overall, we know China is buying more feed barley and while Australia might not be a go-to supplier this year, Canada seems poised to contribute a lot of supply to the People’s Republic again in 2019/20. However, the likes of Kazakhstan and other Black Sea barley producers could certainly be in the mix as well, thanks to these bigger harvests, but also the friendlier political relations than the current relationship with Canada. It’s not to say that barley will be caught in a trade war, but there are other barley suppliers out there other than just Canada and Australia. For barley prices in general, the crop is looking pretty good and this will weigh on values. At a more simplistic level, should we see corn prices continue to pull back, then it’s likely that feed barley prices will too.

Have a great long weekend!

Livestock Producers in Western Canada: You May be Eligible for Tax Deferral