Grain markets found gains the first full week of trading in August, ahead of Monday’s World Agricultural Supply and Demand Estimates (WASDE) report, a report that the complex has been waiting for since the July WASDE. Going into the report, the sentiment is fairly bullish as there are some major reductions of U.S. acreage, production, and ending stocks for the 2019/20 crop.

The main thing that grain markets are for is acres. Quite simply, the July WASDE was completely useless because the acreage numbers that lay the foundation for production were completely irrelevant and the USDA knew it. More specifically, the USDA used the June acreage report numbers in the July WASDE report, despite acknowledging that those acreage numbers were going to be re-surveyed (basically implying that even the USDA didn’t believe them!).

Accordingly, the average pre-report estimate for acres in this WASDE report is pegged at 87.998M for corn and 81.006M for soybeans. Compare this to the July WASDE report acres of 91.7M for corn and 80M for soybeans. In terms of the range, the lowest corn acres estimate was 83.4M while the highest was 89.8M, ultimately meaning if the USDA doesn’t drop their estimate by at least 2M acres, things could get pretty bearish based on what the market is currently expecting to see.

After acres, yield will be the second-most important thing to watch in my opinion. However, yields in this August WASDE will also have an asterisk because they don’t include the usual first Objective Yield Survey from the USDA. That data won’t be released until the September WASDE report. Thus, while we’re finally getting some decent acreage numbers, we know that the soybean and corn yield will still be questionable.

That said, average expectations from analysts ahead of Monday’s WASDE report is for U.S. corn yields to come in at 164.9 bushels per acre and soybeans at 47.6, both a bit below July’s numbers. 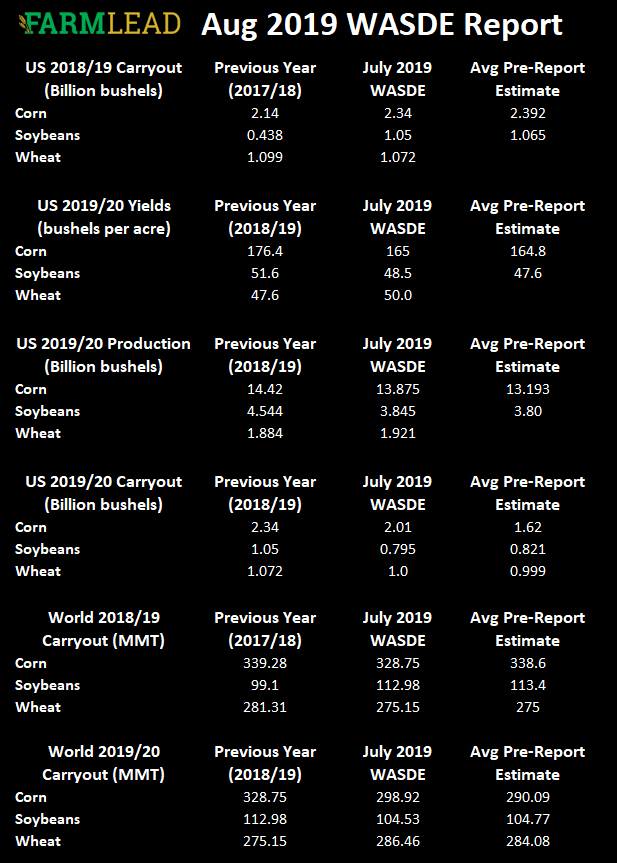 Another thing to be closely watched in the August WASDE will be demand for the big three (corn, soybeans, and wheat). More specifically, the market is looking for some weaker ethanol and feed demand for corn, but stronger feed and export numbers for wheat (albeit wheat exports were already raised in the July WASDE). Part of the rally in Chicago wheat prices this week was some downgrades to production in Europe and the Black Sea. For the latter, central areas of Russia have received three to six times their normal precipitation for this time of year. The moisture would be appreciated, except Russian farmers are in the middle of their wheat harvest!

A strong reversal in soy oil prices and cool temperatures in Western Canada earlier this week has helped canola prices rebound a bit to get back above $450 CAD/MT on the futures board. The other factor supporting canola prices is just the variability of this year’s Canadian canola crop. Grain World’s crop tour through the Canadian Prairies to end July showed some late crops, some just now flowering. With some really hot days last week, the flowering period could shorten, thus reducing the number of pods per plant. Across Saskatchewan, there’s a high amount of variability and production potential is being looked at moreso from a field-by-field basis. That said, average cash canola prices in Western Canada for spot movement lost a little more than 9% in the 2018/19 crop year. 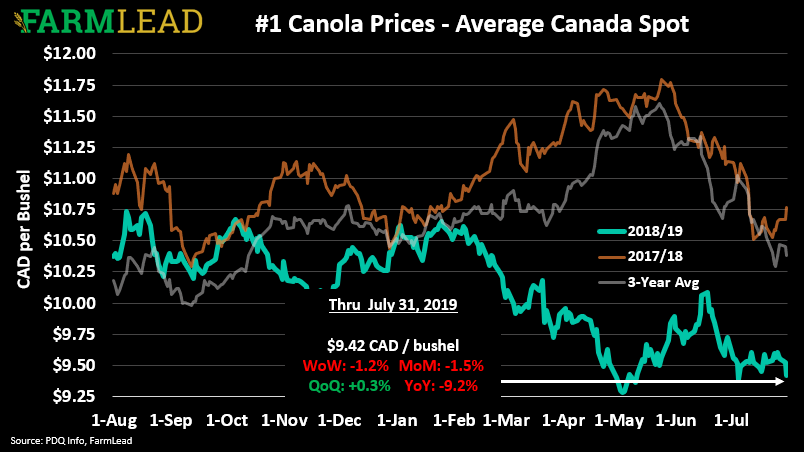 Another interesting dynamic for canola is that China has made plans this week to remove import tariffs on vegetable oils, including soy oil and canola oil. This is likely being done to help curb food price inflation, which is already at record levels thanks to increases in meat prices.

As a reminder, China is expected to cull anywhere from 40% – 50% of its hog herd this year because of the spread of the African Swine Fever there. It’s worth mentioning that the ASF virus has now showed up in Russia, Moldova, Slovakia, and Bulgaria (not to mention various Asian nations). For Bulgaria, they’ve already culled 130,000 pigs, which is significant considering the industry is based on a 600,000-pig breeding herd.

On that note, Brazil is expecting more demand from China and selling of both old crop and new crop is taking place, in addition to more acres being seeded this fall. Rich Nelson from Allendale notes that U.S. new crop soybean sales are the lowest they’ve been in 14 years. On the flipside, China imported 8.64 MMT of soybeans in July, 8% higher than last July and the biggest month for shipments since August 2018.

In response to the U.S. taxing the remaining $300 Billion of Chinese imports not already subject to import tariffs, the Chinese weakened their currency, the yuan, and let it fall to its weakest level since 2008, in addition to telling its state grain-buying agencies to halt all agricultural imports from the United States. Ironically, some really good analysis from the team at ClipperData notes that there’s basically no way for China to only rely on South American and others and not buy soybeans from the U.S. this year. Said non-American countries just can’t meet the demand that China still has, despite the African Swine Fever possibly culling the Chinese pig herd by half.

Overall, grain markets found some good gains this week, but Monday’s trade will be fairly significant with the release of the August WASDE at 11AM CST. Weather will return to play a large role, as well the annual end-of-summer crop tours. Given that crop development in a lot of places across the Midwest is one-to-two weeks behind, those crop tours could prove to be a bullish compliment to Monday’s data.

I've seen over the last few days a lot of stories, comments, and mixed messages about farmers having to dump milk. I thought I'd clear a few things up with my perspective, direct from the farm. We were included in the farmers asked to dump milk. We dumped a little over 4,000 litres of raw,…Read more »

Bearishness and bills — This week in the grain markets

Echoes in the Distance — This week in the grain market