Last week, the federal government announced it would be compensating supply-managed dairy producers $1.75 billion over eight years, for market losses expected through the Canada-European Union Comprehensive Economic and Trade Agreement (CETA) and the Comprehensive and Progressive Agreement for Trans-Pacific Partnership (CPTPP).

Much like many industry issues, there are divided opinions and viewpoints on the topic — and many producers on both sides of the issue have been speaking up.

RealAg Radio host Shaun Haney spoke with Tom Kootstra, chairman of Alberta Milk, to get the dairy farmer perspective of the situation.

When asked whether or not the Canadian dairy sector needed this compensation, Kootstra says it’s not as cut and dry as it is made out to be, especially when using the word “needed.”

“We have given up market access under these two trade agreements, and there will be additional access under the CUSMA, or the new NAFTA 2.0, whichever you want to refer to it as. I think the important thing here to recognize is that the federal government has impacted our industry. You’ve probably have heard (foreign affairs minister) Chrystia Freeland as well as Prime Minister Justin Trudeau talk about fair and equitable compensation,” Kootstra explains. “It’s reasonable, in my mind, that the federal government that has impacted our business compensates us for political decisions. In my mind, the federal government is just living up to a commitment it made, recognizing the impact that they have in our industry.” (Story continues below)

Criticism over the move has come from the Conservative party in regards to the announcement; however, this is the same number that the conservative Harper government had come up and dubbed as reasonable.

“This $1.75 is the same number, as I understand it, that the Harper government identified as part of a compensation strategy, that they didn’t have the opportunity to implement. So is it fair and full compensation? Well, that’s to be debated,” adding, “it’s so difficult to define exactly what is full and fair.”

“The industry response is that this compensation package is being welcomed and is appropriate, and we thank the government for living up to their commitment.” 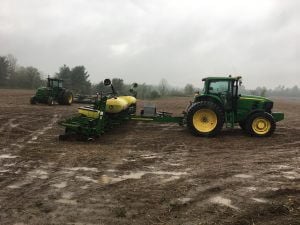 Over $6M announced to fund livestock and forage research in Saskatchewan