The United States Department of Agriculture (USDA) is out with its monthly World Agricultural Supply and Demand Estimates (WASDE). It appears as though corn is back as king, with the department forecasting corn production at 13.9 billion bushels — that’s up 26 million from last month’s projection.

The first yield forecast of the season, which is survey-based, shows 169.5 bushels per acre. Compared to July’s projection, that’s 3.5 bushels higher for the last estimate of 166 bushels per acre. (The trendline yield for corn is 176 bushels per acre.) With the added prevent plant acreage in 2019, analysts will look to harvested grain acreage as more representative than planted acres.

“Everybody was looking for lower acreage and lower harvested acreage on the corn, and maybe lower yield perhaps, and USDA actually came in with planted acres. They still say farmers planted over 90 million acres, and they’re going to harvest 82,” says Marlin Bohling, markets editor with RFD-TV and Rural Radio 147 who spoke with RealAg Radio host, Shaun Haney Monday morning.

“Some of the analysts we’ve been speaking with were looking for numbers more like 79 (million harvested acres), now some were talking 81 or 82 for harvestable acreage but still, another shock was that they actually raised the expected corn yield … when just last month they cut it by 10 bushels an acre.” (story continues below player)

As far as the soybean crop projection looks, the USDA projects 3.68 billion bushels, down 165 million on lower harvested area. According to the report, harvested area is forecast at 75.9 million acres, down 3.4 million from the NASS June Acreage Report led by reductions for Ohio and South Dakota — which account for almost half of the national reduction.

The yield forecast for soybeans shows 48.5 bushels per acre – unchanged from last month, but 3.1 bushels below last year’s level.

“Trade (analysts) thought they’d cut a bushel an acre off of (soybeans), and they didn’t,” Bohling says.

“No matter what the USDA reported today, people were going to freak out. There was no scenario that would not draw criticism from analysts and farmers,” says Haney.

When it came to ending stocks, the USDA has corn up 171 million bushels to 2.2 billion, while the season average corn price received by producers was lowered 10 cents to $3.60 per bushel. In terms on soybeans, they were projected at 755 million bushels, down 40 million. The U.S. season-average soybean price for 2019/20 is forecast at $8.40 per bushel, which is unchanged from last month. 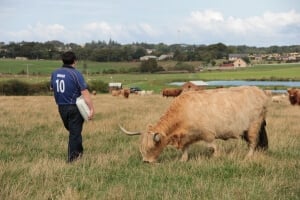 Finding the Hero in Farm Stories

I sat beside a semi-retired oilfield executive on a plane recently. “I’ve got a book in me,” he said, when he found out I was a writer. “I’ve lived all over the place and done a lot.” When I asked him for an example, he talked about how he still drove his 1999 pick up,…Read more »

$41.8 million fertilizer terminal to be built in southern Alberta