This week the markets have shown many points of stress, as they react to Monday’s USDA report that shocked many farmers and analysts.

On RealAg Radio on Thursday, Shaun Haney was joined by Ted Seifried of Zaner Ag Hedge to break it all down. Seifried described Thursday’s pricing action as a day that the “dust tried to settle.”

Corn was up in the the near months with the the Dec contract closing at 371-0, up 6-0 on the day. Soybeans were down 7-2 and closed at 870-6 while KC wheat December contract was up 3-4 to 404-2. Besides corn, K.C. wheat and canola, all agricultural commodities were lower on the day. (A summary continues below player…)

With the volatile pricing action this week, corn and soybeans can be viewed differently.

Does Seifried have new price targets for corn? 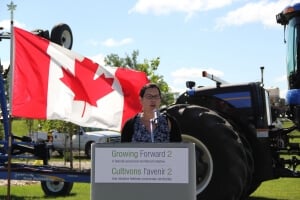 Who is eating all the durum?

FNA Asking Ottawa To Hold Off On Privatizing CWB