A United Nations working group has released its report on climate change and land use. It points to per capita consumption of food, feed, fibre, timber and energy since the ’60s has caused “unprecedented rates of land and freshwater use” with agriculture currently accounting for approximately 70% of global fresh-water use.

The Intergovernmental Panel on Climate Change (IPCC) has spent the last two years compiling the data, working with over 100 researchers, to highlight how current eating patterns and agriculture practices impact global climate change.

The report is intended to be used by governments around the world to inform and shape policy.

The report identifies deforestation, tillage, and animal agriculture as key drivers of surface temperature changes, as well as increases in atmospheric greenhouse gases.

While the report does not explicitly say to cut out meat consumption to reverse land degradation and climate change, it does encourage plant-based diets and sourcing “sustainable” meat. The report says these changes could lead to land improvements and greenhouse gas reductions measured in gigatonnes.

The report also identifies that even while those humans who weigh in as obese/overweight increases, so too does the number of under and malnourished. Food waste was also identified as a contributing factor to the overall challenge of balancing human food needs with climate change risk.

Following the repot release, the Canadian Cattlemen’s Association released a statement to address the call for reduced or changed meat consumption, saying that Canada’s beef production system is an excellent example of an “…animal-sourced food produced in [a] resilient, sustainable and low-GHG emission system” (A quote from the report).

“Research shows Canadian beef has one of the lowest greenhouse gas (GHG) footprints in the world, accounting for only 0.04 per cent of the world’s greenhouse gas (GHG) emissions.  In Canada, the beef industry attributes just 2.4 per cent of the country’s total GHG footprint while contributing $33 billion to the Canadian economy.” Substantial amounts of carbon are stored in Canadian rangelands managed by the beef industry, as well, CCA says.

CCA highlights that cattle are actually part of the climate change solution. “Canadian beef cattle help to preserve one of the world’s most endangered ecosystems. Canada’s beef production is centred on the Northern Great Plains, one of four temperate grasslands remaining on the planet. According to the World Wildlife Fund, half of the Northern Great Plains have already been lost to cultivated agriculture. This action threatens wildlife habitats that the beef sector preserves through well-managed grazing. These grasslands are home to at risk species like the swift fox, sage grouse, and monarch butterfly. They are among the 579 birds, mammals, reptiles and amphibians that need uncultivated land for feeding, breeding, and shelter. Grazing cattle is also a recognized practice to help mitigate the risk of wildfires.” 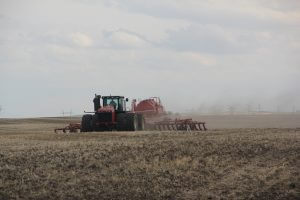 After years of discussions about how to fund the development of new crop varieties in Canada, two seed industry groups have announced they're moving ahead with a pilot program for the 2020 growing season. The Canadian Seed Trade Association (CSTA), along with the Canadian Plant Technology Agency (CPTA), announced a Seed Variety Use Agreement (SVUA)…Read more »

Tote Bags Identified as Most Likely Carrier of PEDv In U.S.

Canterra and Crop Development Centre Complete Deal for Pea Sales Into the U.S.