Grain markets in the second half of this week battled to recoup its losses from the first half after the USDA said there was way more corn planted and its yields would be better, basically contradicting everything that the market was expecting.

The biggest surprise from the USDA on Monday was acres. Everyone and their mother was expecting corn acres to drop, yet the USDA basically suggested that said every farmer and their mother planted corn in June as corn prices rallied. More specifically, the USDA said that total planted corn acres this year were 90M, well above the 88M that the market was expecting. This, despite it being the worst planting season ever as 11.5M acres of corn were categorized as Prevent Plant. This basically means that U.S. farmers intended to plant 101.2M acres of corn this year.

University of Illinois ag economist Scott Irwin made some really healthy points following the WASDE report release, suggesting that acres could be right, but yields are likely wrong. More specifically, basically 2/3s of the U.S. corn crop was planted after May 15th, the usual cut-off date for optimal yield potential. This included more than 1/3 of the crop that was planted after June 1st. Thus, if a significant amount of corn was planted after optimal yield dates, how can the USDA justify corn yields of 169.5 bushels per acre, or just 7 bushels less than last year’s 176.4 bpa.

Put another way, we didn’t have near-optimal planting conditions like seen last year and so it’s scientifically possible that corn yields are only marginally lower than last year’s near-record yields? Conversely, a private crop tour via Pro Ag Marketing estimated their corn yield at 159.9 bushels per acre. [We have more crop tours on the books, including one through Ohio this week (which has some of the highest prevent plant corn acres in the country) as well as the Pro Farmer crop tour next week. These in-field measurements might be just bullish enough to get corn prices going again. Here’s a breakdown of some of the other major areas grain markets were watching on Monday. 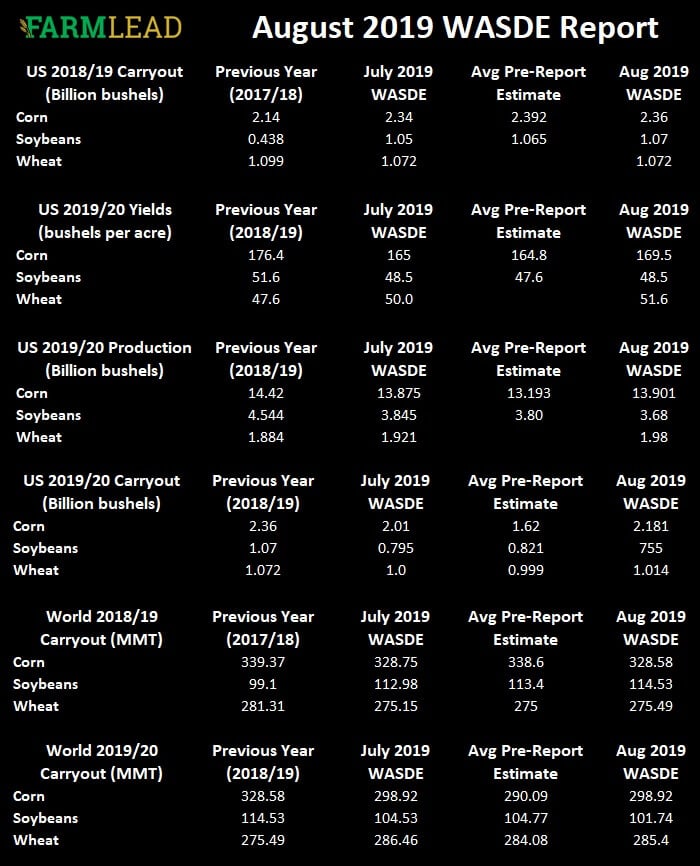 For the wheat market, it was a bit surprising to see the USDA raise average American wheat yields by 1.6 bushels per acre, especially considering that a crop tour of HRS  wheat a few weeks ago said otherwise. This effectively drove production 60M bushels higher from the July WASDE, and although U.S. wheat exports and feed use were also raised, ending stocks jumped 14M bushels.

Digging deeper, durum production was lowered by more than 1M bushels and exports were increased by 5M, which resulted in American durum carryout lowered by 6M to now sit at 54M bushels (or 1.47 MMT. Conversely, U.S. hard red spring wheat production was raised by 24M bushels but domestic use was raised by basically the equivalent amount, so ending stocks barely moved, now sitting at 322M bushels (or 8.76 MMT).

Internationally, Europe and Russia saw production declines from the July WASDE, but this was made up by bumps in the wheat harvest of America, Argentina, and the Ukraine. On the exports front, it was the same dynamic with Russian and E.U. shipments felled, but the other nations with production increases also are expected to export more. Worth noting is that the USDA expects only 2 major wheat countries to see their wheat exports decline in 2019/20 compared to last year: Canada and Russia.

More generally-speaking, it seems that there could be more wheat exports out of Europe as Strategie Grains just raised their forecast by 2.3 MMT to now sit at 142.9 MMT for the bloc’s wheat harvest. [6] This would also be 12% higher than last year’s drought-riddled crop and mainly a function of better harvests in France and the U.K. making up for losses in the south (especially Spain). From a wheat exports perspective, Strategie Grains pushed up their estimate by nearly 3 MMT from their last forecast to 24.8 MMT of soft wheat exports, with the logic behind the increase rooted in Black Sea wheat prices falling a bit, making EU wheat more competitive. However, while it’s only a few weeks into the wheat marketing year in Europe (which started July 1), EU wheat exports are tracking 30% behind last year’s pace.

Conversely, the crop year for Canadian wheat exports ended just 2 weeks ago and the Canadian Grain Commission says that total volume topped 18.24 MMT. This is up more than 12% year-over-year and likely part of the reason that the Port of Vancouver has shipped a record amount of commodities in the first half of 2019. 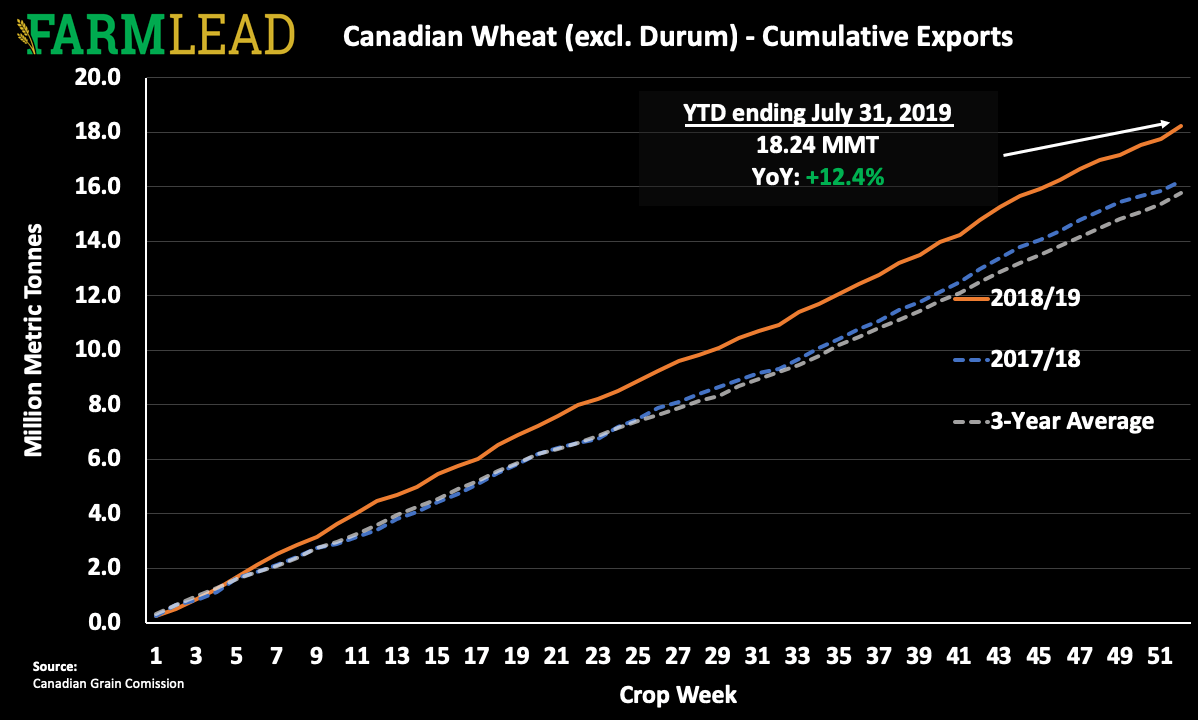 Comparably, U.S. HRS wheat exports are tracking nearly 10% behind last year’s pace with just 1.06 MMT shipped out through Week 10 of its 2019/20 marketing season. 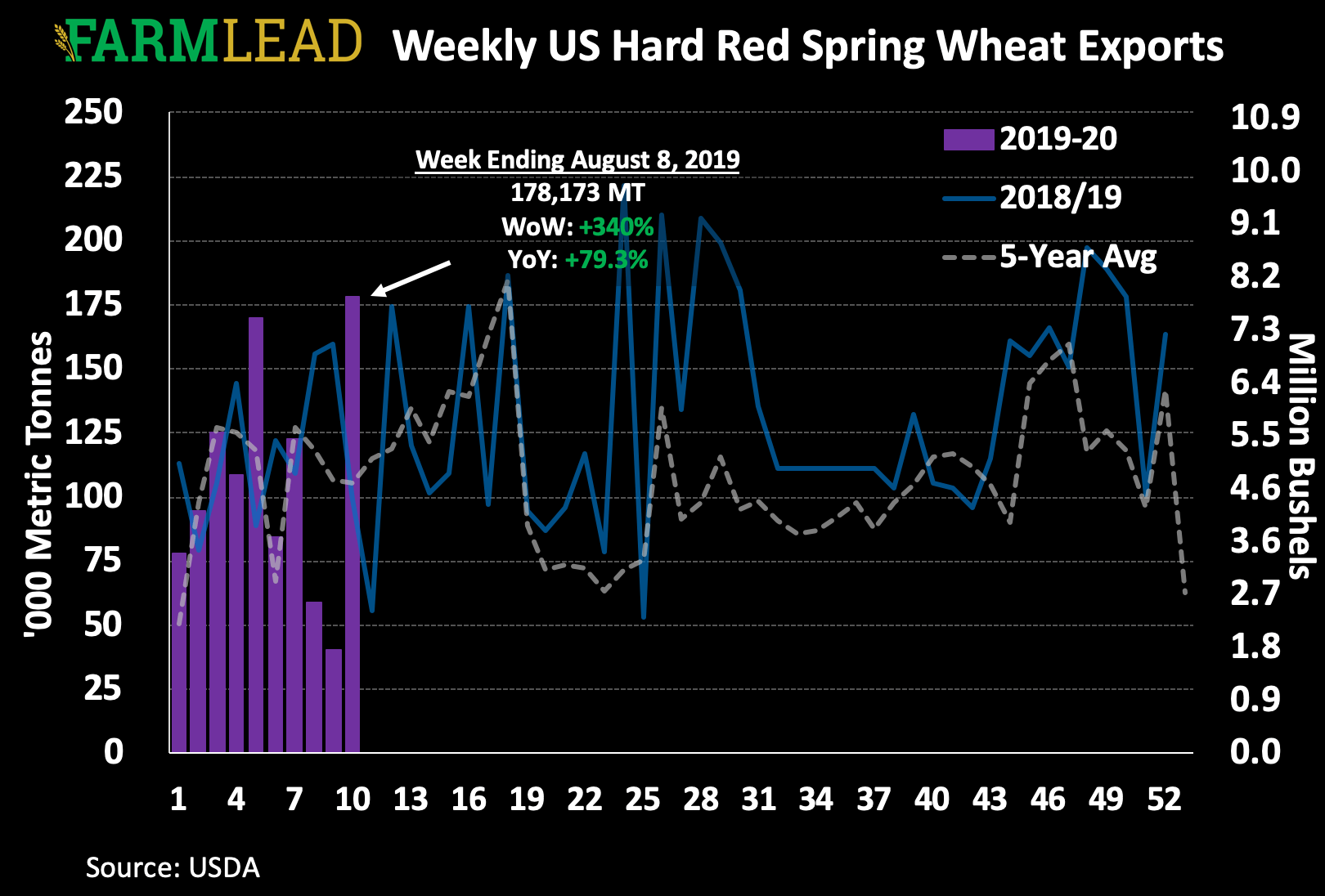 Flipping over to canola, NOPA data released this week showed us that 168.093 million bushels of soybeans were crushed last month, a new record. July’s crush is a little less than 1% better year-over-year but it is 13% more than June’s crush volumes. Soy oil and canola prices climbed yesterday though as this crush volume for July was much higher than the 155.83 million bushels that the market was expecting to see and it stops the slow production skid that May and June saw. As a reminder, the USDA felled their U.S. 2018/19 soybean crush forecast by 20M bushels in Monday’s WASDE report.

Canola prices were resilient this week on crush margins in Canada being some of the best of 2019. You could say that this is likely because there’s more supply for the crushers to pick from as canola prices and exports have been subdued without China aggressively in the market. More specifically, through the end of the 2018/19 crop year on July 31, 2019, total Canadian canola exports finished at 9.28 MMT, down 9.3% year-over-year. 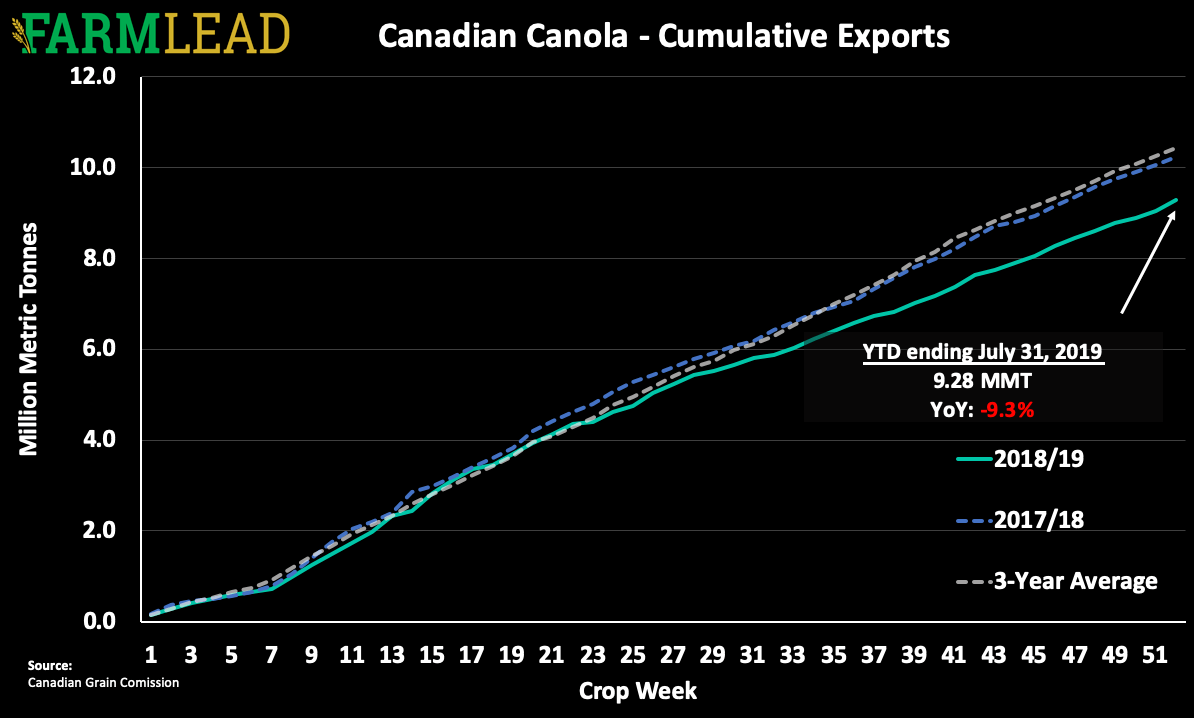 This data will likely be reflected in the data from Agriculture Canada in their monthly estimates next week. However, what I’m more interested in seeing is whether or not AAFC accounts for some better Canadian canola trade with Europe. Lachstock Consulting out of Australia suggests that Canadian canola exports to the EU in 2019/20 could come in between two to three million tonnes, if not more, given the EU’s weaker crop this year and smaller trade with other partners. Viterra is expecting the EU rapeseed harvest to come in at 17 MMT, down 22% year-over-year. Further, as it continues to be dry in eastern Australia, Lachstock is expecting Australian canola production to only amount to 2.5 MMT, about 1 MMT below average. Ultimately, there is likely going to be a window of opportunity for canola exports in 2019/20 and it might be one through which canola prices climb up through.

5 takeaways from the 2020 Crop Production Show

It was a very frosty week in Saskatchewan, which felt just right at -50 degrees Celsius. Inside the walls of Prairieland Park at the Crop Production Show, famers were in a relatively good mood despite the roughly 10% of the 2019 crop still out in the fields. After three days at the show, I decided…Read more »

Chasing Chickens — This Week in the Grain Markets