Time flies when you’re having fun.

At this week’s Canadian Outdoor Farm Show at Woodstock, Ont., RealAg Radio host, Shaun Haney got the chance to catch up with the folks at PRIDE Seeds as they celebrated 70 years in the business.

Doug Alderman, vice-president, sales and marketing, reflects back on the past with Haney, as he’s been with the company for the past 20 of those years.

“It actually began with (a man named) Napoleon King, or Nap King  just outside of Chatham, Ontario, and Nap was a guy that really had a lot of vision, he was passionate about agriculture, he was passionate about the seed industry, and then in 1938 he took a trip into the midwest U.S. to learn more hybridization and looking at four-way hybrid crosses,” Alderman explains.

“(King) came back and started a bit of a research program here and then in 1939, he developed the very first licensed hybrid in Canada, it was called K300 … then it expanded somewhat through the 1940s and then in 1950, Nap brought the PRIDE Seeds brand here to Canada and that’s where the brand was, so it was King Agro (at first) but then (rebranded to) PRIDE Seeds in 1950s and as a result we’re into our 70th year here.”

In 1994, PRIDE Seeds was sold to Groupe LimaGrain of France. 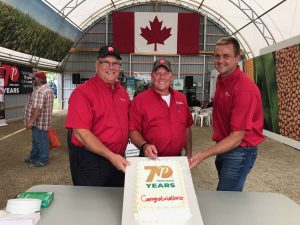 The company grew,  and really took off in 2000, when Groupe LimaGrain and KWS from Germany joined forces and started AgReliant Genetics.

From then on the company has built up quite a business with AgReliant Genetics having the third largest market share in corn in North America — both in the U.S. and Canada. Overtime different the company toyed with multiple brands but then settled on two main brands in the U.S. (LG seeds and AgriGold) and then PRIDE seeds in Canada.

Learn more about how PRIDE seed’s history in the interview below with RealAgriculture’s Shaun haney, and PRIDE’s Doug Alderman below: