Grain markets ended the third week September rather mixed as trade and export disappointments dragged down corn and soybean prices while wheat found gains on quality concerns. For corn, U.S. 2019/20 exports are tracking about 37 per cent behind last pace through this week, while China cancelled its farm visits, intuitively fading in optimism for a trade war resolution sometime soon. For wheat, wet weather throughout the Northern Plains and parts of Western Canada is bringing about some concerns over the quality coming off in Harvest 2019.

Staying in spring wheat, sprouting and bleaching issues are resulting in some buyers of HRS and durum wheat to already have some pretty steep discount schedules. What’s potentially compounding the quality issue is further wet weather through the weekend in North Dakota, Montana, Manitoba and some parts of Saskatchewan. Add in the fact that we’re getting pretty close to normal frost dates, I’m expecting to see protein and quality premiums and discounts to spread even wider. As you can tell from the current state of Harvest 2019 progress in Western Canada, there’s certainly a lot of crop left to get combined.

The quality question is also will apply to other pulses and cereals, especially malt barley, as buyers are saying that they’re seeing more chitted samples coming across their desks. The more chitted (or pre-germination) barley there is, the sooner that it should be made into malt as quality will degrade faster if it sits in the bin for too long. Accordingly, my guess is that we’ll see a few more bushels that were seeded for malt end up in the feed category. This holds true for wheat and oats as well. Ultimately, if there’s a year to make sure you’re taking proper samples and getting your grain tested, this is it. For the former, we’ve built a simple cheat sheet to take proper grain samples. Even if you’re going to have to sell into the feed market, knowing disease levels will be a top priority for any buyer.

Looking more globally, available malt barley around the world is said to be adequate, if not plentiful. The European barley harvest is in the bin with no quality issues and the Australian harvest is looking bigger this year. However, Australian barley is currently being investigated for anti-dumping by its main market, China, despite about 2/3s of all Aussie barley exports usually headed to the People’s Republic.

Staying in Harvest 2019, the U.S. Corn Belt is expected to receive some cooler weather this weekend, while the long-range forecast is calling for a wetter October. Intuitively, Harvest 2019 will be a challenge this year and the likes of Ukraine are looking to take advantage on the corn exports front. Harvest 2019 in Ukraine is seeing corn yields climb 8 per cent from last year to 95 bushels per acre, suggesting a record crop of more than 36 MMT that the USDA said in their September WASDE. There is some suggestion that South Korea, Japan, and China could all buy more corn exports from the Black Sea country this year.

Specific to China, the country’s Ag Ministry says they still have about 56 MMT corn in their strategic reserves but will probably import four to 4.5 MMT this year. While that brings their 2020 ethanol mandate into question, the bigger macro factor that I’m watching that the Ag Ministry shared this week is the size of the country’s pig population. Specifically, the People’s Republic said that the country’s hog herd in August was nearly 40 per cent lower than the same month a year ago. This is another record monthly decline (relative to the same month a year ago) as the country continues to have troubles managing the spread of African Swine Fever, which has now been found in every single Chinese province!

Further, the Ag Ministry continues to categorize the African Swine Fever situation as still “severe”. And it’s not just in China, but elsewhere. The virus has spread to many other Asian countries, has been found in the Black Sea, and even Africa. Put simply, it’s now basically impossible to get ahead of the virus spreading further unless a vaccine is developed. To put the spread of African Swine Fever into perspective, Mercado Analysis notes that nearly one-quarter of the world’s pigs have had to be killed.

As I mentioned last Friday, pork prices in China jumped 50 per cent in August thanks to the significant decline in inventories for a growing middle class. Compared to a year ago, pork prices are nearly 80 per cent higher to now sit at a record of nearly USD$13 per pound! With higher pork prices, prices for other protein (i.e. beef, poultry, and fish) have also climbed, pushing the food price index to its highest since January 2012. This is likely why China is planning to exempt pork and soybeans from further tariffs on U.S. goods. However, the news that Chinese officials cancelled their planned visits to U.S. farms is a bearish signal for a trade war deal resolution being found.

One bullish datapoint from China is the amount of peas they’ll continue to need in 2019/20. A report this week from the USDA’s attaché in Beijing suggests that Chinese farmers will produce 4MMT of pulses this year, down about 10 per cent year-over-year due to less acres harvested and some poor growing conditions. Specific to peas, production is estimates at just 200,000 MT, down about 15 per cent from last year, mainly because of poor returns, thanks to lower-priced imports challenging the market. It’s been estimated that China will need to import 1.7 MMT of peas in 2019/20, a 10% decline from 2018/19, mainly because of bigger stocks being carried over from the last two years.

The USDA is reporting that Canada continues to be the major supplier of peas to China, especially since the trade war with the United States started up. Through the first 7 months of 2019, U.S. pea exports to China were half of what they were in 2018, whereas Canada has basically accounted for all Chinese pea imports. That said, through Week 6 of the 2019/20 crop year, Canadian pea exports are tracking nearly three times higher than the same week in 2018/20, with 311,500 MT shipped out. This comes on the heels of 230,000 MT of Canadian peas heading to China in July to end the 2018/19 crop year. 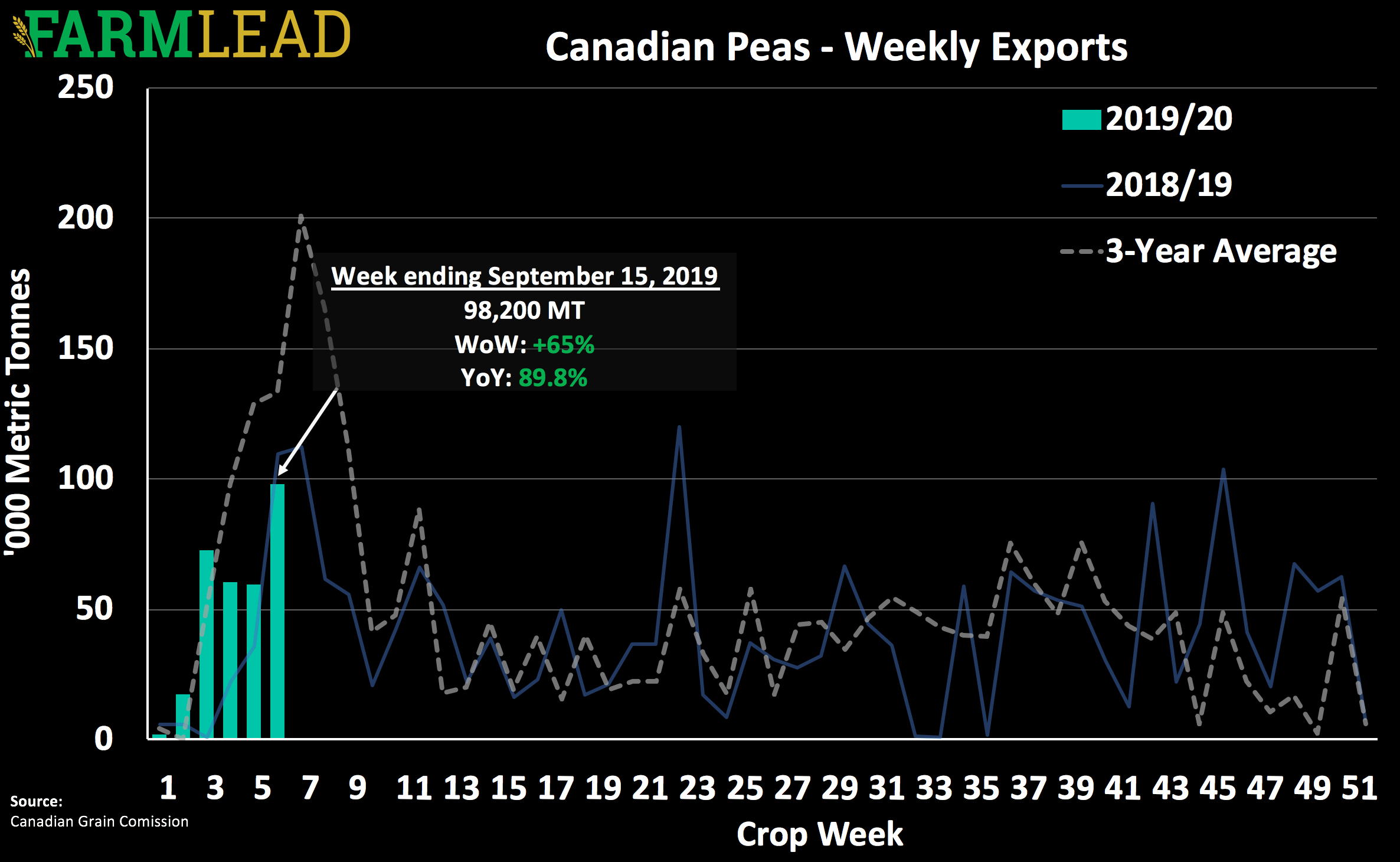 If the weather issues in North America during Harvest 2019 are more of a problem, we might see buyers – be it from India, China, or elsewhere – start to pick up their socks and get a little more aggressive to ensure they have both the quality and quantity. In fact, wrinkles and colour loss is already a bit of an issue for this year’s Canadian lentils crop.

Again, proper sampling and testing right now will help you get ahead of the ball when it comes to your grain marketing for fall or winter months. Regardless, I hope you have a great weekend and make some progress in the field!

Satellites Helping Understand and Predict What Happens in the Field

Directional Volatility — This Week in the Markets