Statistic Canada is out with its Principal Field Crop Estimates for the month of August, and the model-based analysis paints a bit of a different picture than the July report.

In the west, dry conditions continue, especially in both Alberta and Manitoba. 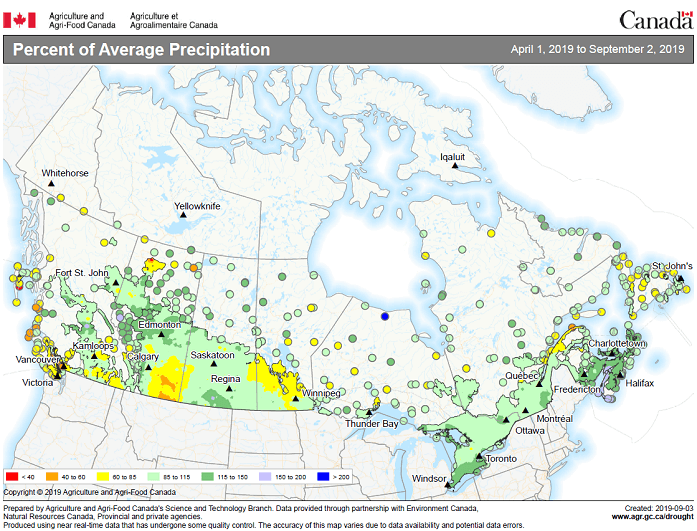 It’s still a different picture when you look east, as Ontario is still dealing with above average rain which has attributed to a delayed corn and soybean plant. 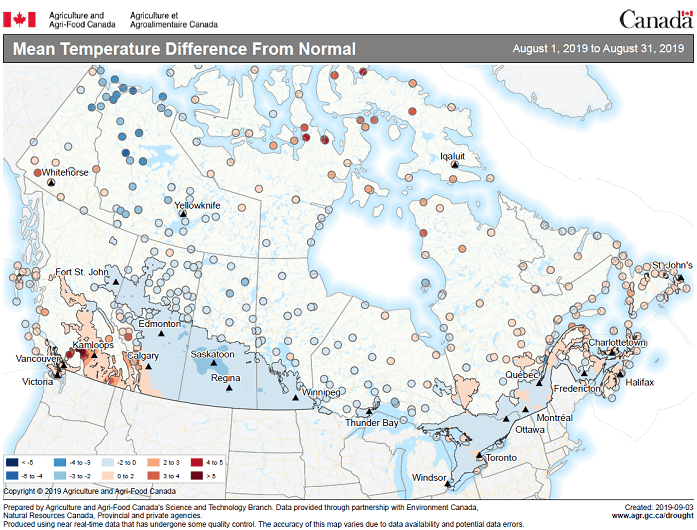 Total wheat production is expected to get a .9 per cent boost compared to last year, for a rough total of 32.5 million tonnes for this year. With an increase of 1.9 per cent to yield that would peg total wheat at 49.4 bushels per acres, which would offset a 1.1 per cent decline in harvested area.

Durum wheat production for this year is expected to decline by 13 per cent compared to 2018, coming in at around 5.0 million tonnes.

When it comes to winter wheat production, there’s an expected decline of 30.7 per cent, to 1.7 million tonnes, with 25.1 per cent decrease in harvested area, and an estimated 7.4 per cent decline in yield to 69.6 bushels per acre. (stats on canola, corn for grain an soybeans continue below player)

Although higher yields of about 3.8 per cent (to 41.3 bushels per acre) are expected for the 2019 crop year for canola, production is still expected to decline by 4.8 per cent, to about 19.4 million tonnes. Attributed to this decline is the lack of moisture and the need for a good rain fall.

On the bright side, at the national level, corn for grain production is expected to rise 1.6 per cent from 2018 to 14.1 million tonnes this year. Statistics Canada says an estimated 2.3 per cent increase in harvested area in 2019 could offset a 0.6 per cent decline in yield to 153.6 bushels per acre. Again, weather played a major roll in this as a cool wet spring delayed planting in Ontario where 87 per cent of the country’s corn is grown.

According to the report, soybean yield is expected to decline 1.2 per cent to 42.0 bushels per acre at the national level in 2019, compared with 2018. The lower yield, combined with a 9.7 per cent decline in harvested area to 5.7 million harvested acres, is expected to result in a 10.8 per cent annual production decline to 6.5 million tonnes in 2019.

Final crop production estimates for this year will be released on December 6, 2019.