Grain markets were mixed in the last full trading week of September, with weather and trade continuing as the two main themes for this growing season. It was a busy week in trade, positioning itself for the end of the trading month, calendar quarter, and the release of the quarterly stocks report for American grain.

On Monday, the USDA will release their quarterly stocks report for inventories as of September 1st. Heading into the report, there’s a large expectation that corn and soybean stocks will grow, relative to September 1, 2018. More specifically, the average analyst is expecting Monday’s stocks report to show soybean stocks at their largest level ever, and corn inventories at their highest level since 1988. Comparably, the average pre-report guesstimate for what the stocks report will show for wheat is a slight drop of 3% from the same period a year ago. 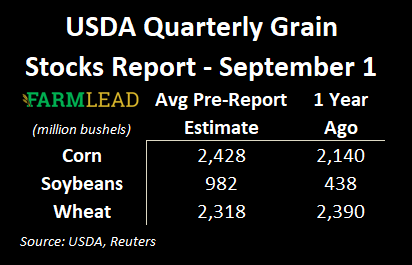 If these numbers are realized, it would imply that soybean use for the last quarter of the 2018/19 crop year was a record 808M bushels. That’s up three per cent from last year’s Q4 use (which was the previous record) and 20 per cent higher than the next largest level from 2016.

Comparably, U.S. corn usage/demand/disappearance in Q4 of the 2018/19 crop year  would be down about 12 per cent from last year’s record, should these pre-report numbers be realized. It is, however still the fourth-highest usage for Q4, tracking only last year, 2017 and 2016. To put it another way, demand is pacing pretty high as soybean and corn production also track at near-record levels every single year.

Soybean prices found some gains on more buying from China, as well as some cooler weather in the forecast for next week. Kluis Advisors noted this week that “When soybeans close higher in the month of September – which has happened only about 20% of the time in the last 30 years – it signals higher soybean prices in the month of October.”

Ahead of fresh trade talks (slated for a few weeks from now), Beijing seems to be extending a pretty long olive branch, by buying quite a few soybeans this past week. As Ted Seifried of Zaner notes, China has bought about 1.6 MMT in the last two weeks and has granted tariff exemptions on 6 MMT of U.S. soybeans before the next round of trade talks in a few weeks. From an actual movement standpoint, U.S. soybean exports through Week 3 of the 2019/20 crop year are sitting at 2.07 MMT, or about 13 per cent behind this point a year ago. 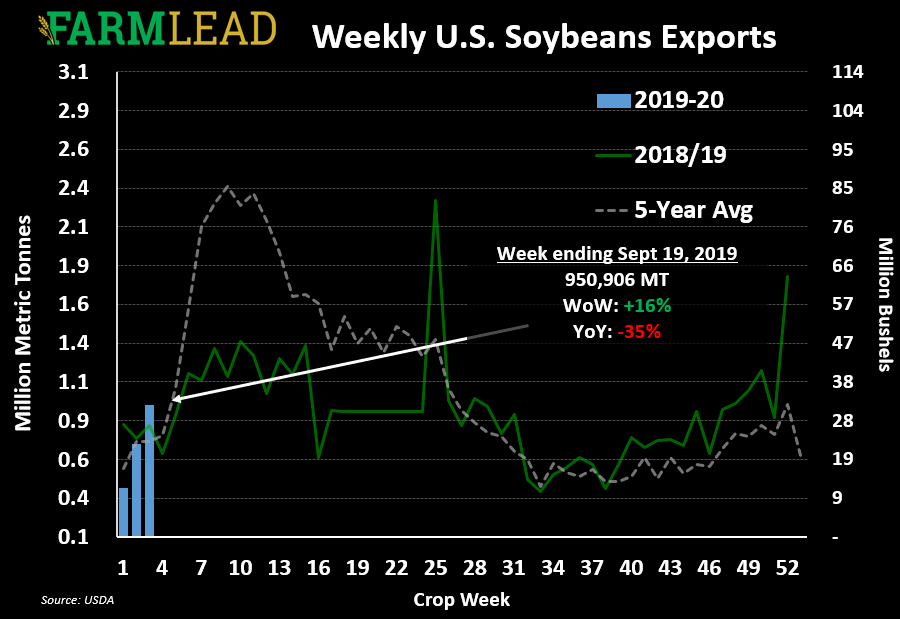 In the wheat market, Chicago ended the week in the positive on some optimism that a Japan-U.S. trade deal will be completed soon. The deal would open up the Japanese market again, after losing preferential status when the U.S. bowed out of the Trans-Pacific Partnerships. On that note, Ukraine is seeing grain fly out of its ports to start the 2019/20 marketing year. Through last week, 12.4 MMT of grain has been exported, up 50 per cent year-over-year. This includes 7.3 MMT of wheat exports, which is up 26 per cent from the pace a year ago.

Staying in wheat exports, Argentina might have some trouble meeting its planned targets this year thanks to, once again, Mother Nature. The Rosario Grains Exchange said recently that drought combined with freezing temperatures are to blame for the poor crop conditions in Argentina’s main wheat-producing region. Yield losses are already estimated at somewhere between 20 to 40 per cent. It’ll be interesting to see what those combine yield monitors say when Argentina’s wheat harvest starts up in November.

Coming back to North America, spring wheat prices were the big winner for the week, thanks to ongoing quality and quantity fears from all the rain that Mother Nature has been serving up in Western Canada and the Northern Plains. To put it bluntly, winter is making landfall in Western Canada this weekend, namely for Saskatchewan and Alberta with snow expected to start falling Friday in the latter and continuing through Monday. Southern Alberta and southwestern Saskatchewan are expected to get the most snow, which isn’t great timing considering that there’s still quite a bit of harvest to finish in these areas. Conversely, Manitoba and North Dakota are likely to get a little more rain.

More specifically, through Monday, September 23rd, the Saskatchewan government says SW Saskatchewan had about 65 per cent of this year’s crop combined. In West Central Saskatchewan, where snow is also expected, that number was just under 50 per cent. While we can assume that combines were going pretty hard this week, I would estimate that there was probably 25 per cent is left in SW Saskatchewan, and 40 per cent in west central Saskatchewan. Across the Canadian Prairies though, you can tell that there’s still a ways to go before we can put a lid on this tough growing season. 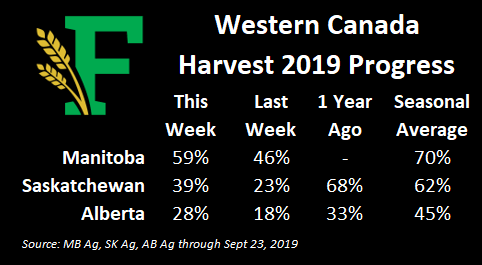 In the U.S., more rain is expected in the Midwest this coming weekend, with the system likely hitting an area from Kansas City diagonally up to Detroit. Some states in the U.S. have already passed their normal frost date and with this current week relatively warm, this should help the maturity of crops. However, moving into next week (and the month of October!) cooler weather is on the horizon and combined with wet fields not being able to dry out well, many are preparing for a difficult, sloppy harvest.

Poll: What crop will be most profitable this year?

Wheat School: Where Has the Buzz About CPS Wheat Gone?