Allendale, INTL FC Stone, and Informa all shared updated yield estimates this past week, and since they don’t account for the potential of an early frost, the numbers were interpreted as bearish. Compared to the ProFarmer crop tour estimates from a few weeks ago, this is bearish and the markets acted accordingly this week. 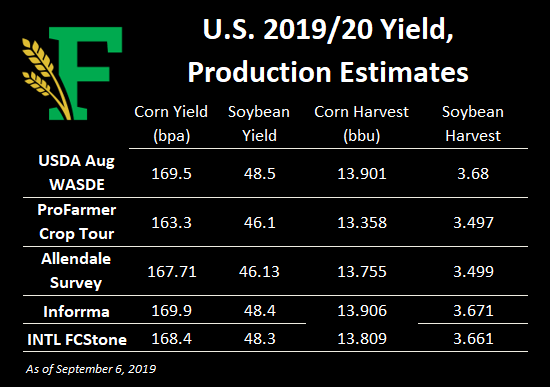 While it seems like corn and soybean yields and edging higher with some better weather as of late, the fact remains that this crop is late. While there are fewer signs of frost in the long-term forecast for the Midwest, the data shows we’re still 1-2 weeks behind in many places. Digging in, through the September 3 crop progress report, more than 17M acres of corn haven’t hit their dough stage (usually only about 6M acres remaining at this time of year), while more than 10M acres of soybeans haven’t even started setting pods yet!

Markets are continuing to look at crop development versus what the weather maps are saying. That said, while the weather is looking supportive for late-planted crops in the Midwest, especially soybeans. However, temperatures are expected to be a little below average around the 49th Parallel according to the latest forecast from DTN. That said, Saskatchewan and Manitoba need some drier weather to get combines rolling again the provinces. Across Western Canada, harvest is behind both last year and its seasonal averages. 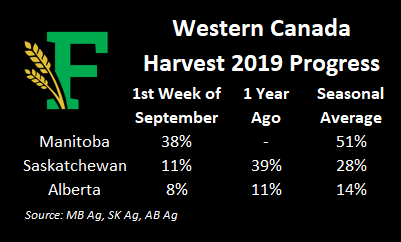 While combines aren’t really moving, some activity on the political front is. On Wednesday, the former global managing partner of premiere consulting firm McKinsey, Dominic Barton, was named Canada’s new ambassador to China. The government there was quick to remind the new ambassador and Ottawa to “reflect on its mistakes” before heading to Beijing. Put another way, China has offered no sign of new warmth towards Canada on the political front. This has not stopped the Canadian government to now go to the WTO regarding the blocking of canola shipments.

While businesspeople often have a tough time transitioning into politics, Mr. Barton is well-versed with China’s elite and politics, after spending many years working with companies and leaders there. That said, my business partner and FarmLead COO/co-founder, Alain Goubau, was at McKinsey for a few years before we teamed up, and based on my conversations with him, this is a good move for Canada and, more specifically, Canadian agriculture (Shaun Haney agrees!). This is because Mr. Barton chaired the Canadian Advisory Council, which had suggested in the report literally named after Dominic Barton, that Canada could move from fifth to second in terms of the world’s largest agricultural exporters.

That said, Canadian canola exports to start the 2019/20 crop year are quite strong. Through Week 4, total shipments of nearly 760,000 MT are tracking 50% higher than the same point a year ago. Despite StatsCan forecasting last week that this year’s canola harvest should come in 9%, or 1.89 MMT below Harvest 2018, average cash canola prices for spot movement are tracking more than 8% behind a year ago. 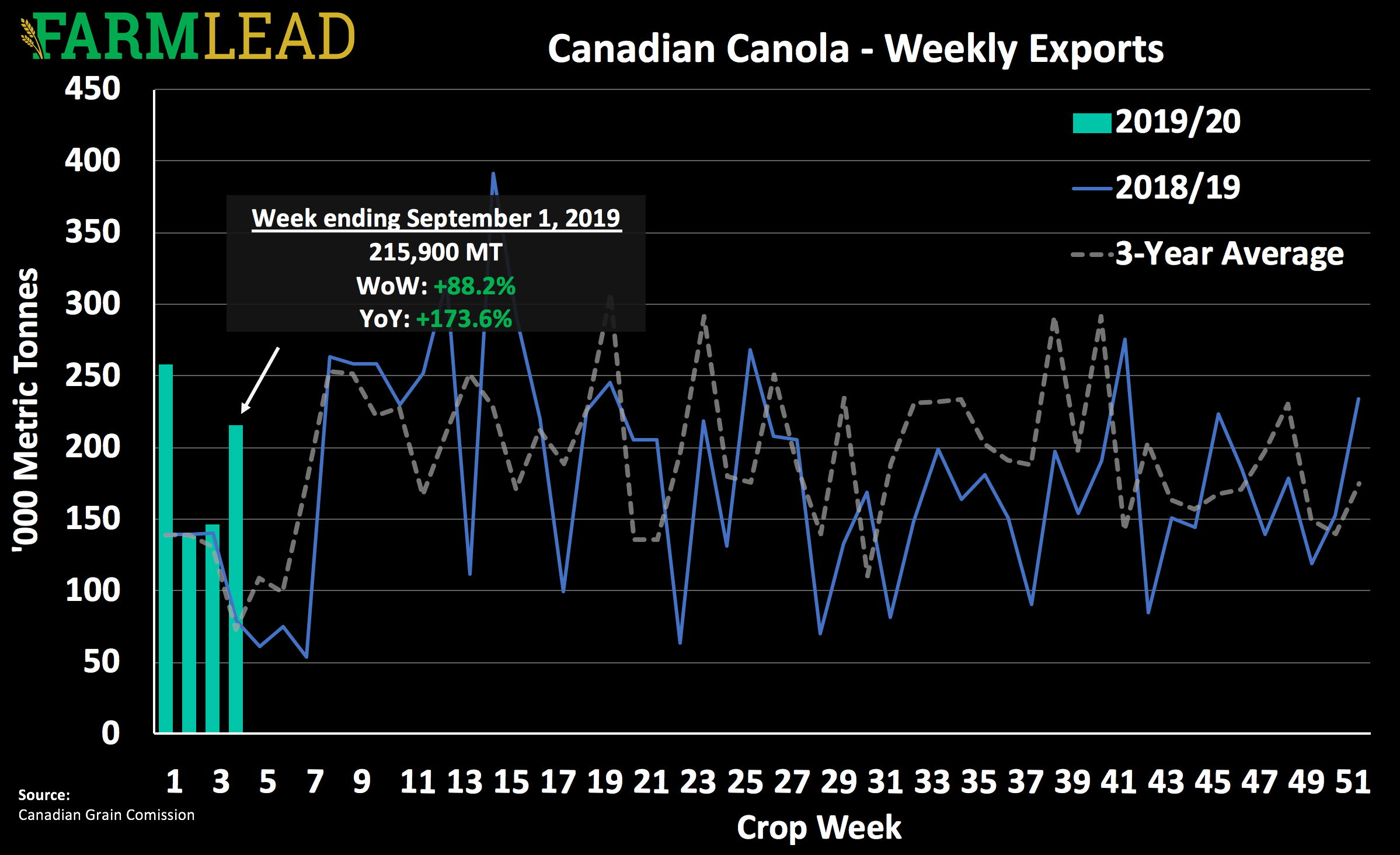 On the flipside, Canadian barley exports have had a slow start, with only 31,900 MT shipped out through Week 4 of the 2019/20 crop year. That’s a drop of 50% from the same time a year ago. With harvest ramping up and new crop supplies coming to market, feed barley prices in Saskatchewan have dropped nearly 11% in the past month and more than 15% over the past 3 months. For feedlot alley in Southern Alberta, since the highs were seen at the end of June, feed barley prices have dropped nearly 25%, or about $80 CAD/MT, to $210. 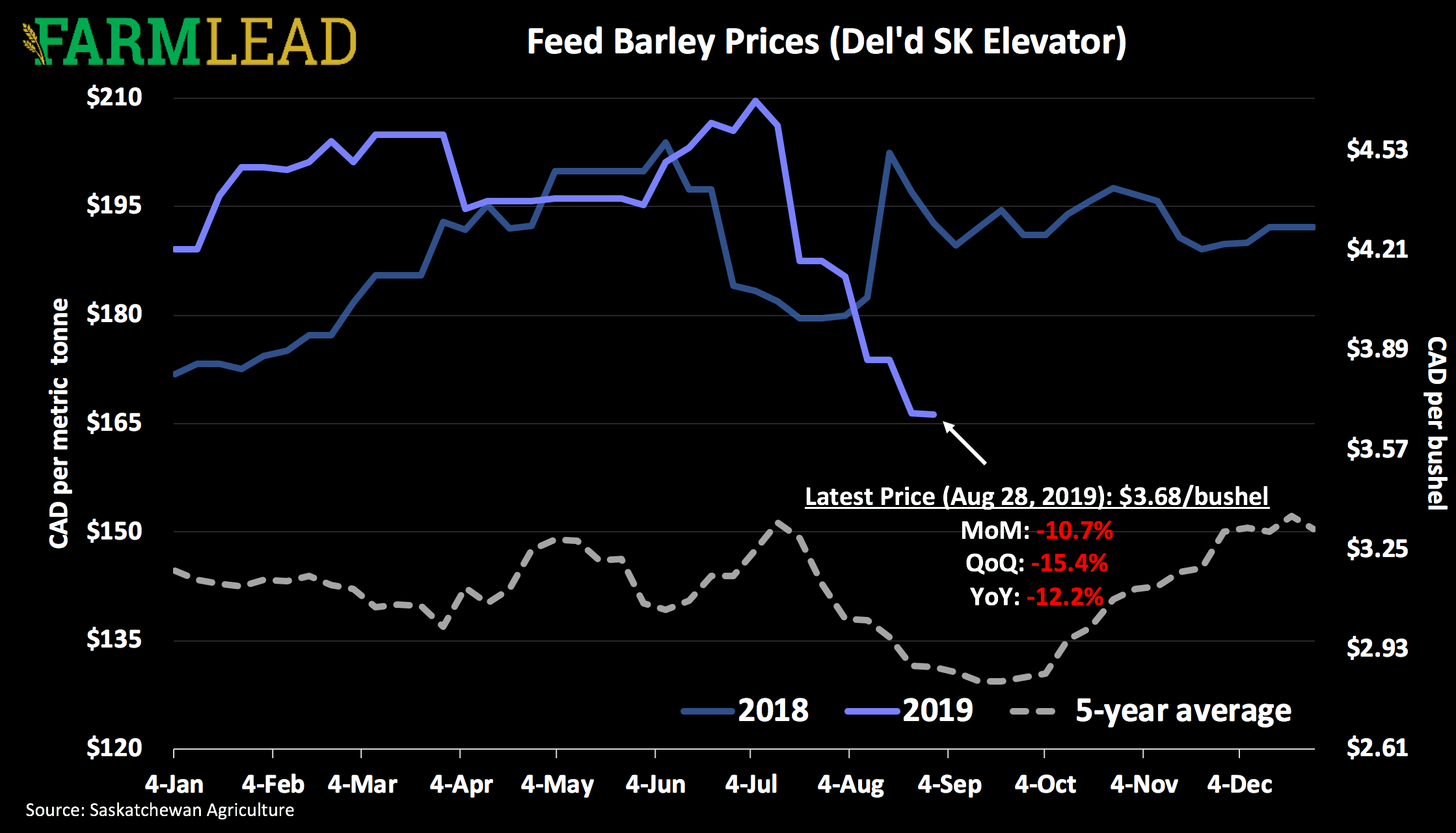 Next week, we’re going to get a heavy dose of new production estimates. On Tuesday, September 10th, we’ll get a fresh production forecast update from ABARES (the Australian version of the USDA). Then, on Thursday, September 12th, we’ll get both the September WASDE report and Statistics Canada’s data-driven crop production estimates.  As a reminder, last week, StatsCan said that the Canadian 2019/20 canola and wheat harvest would be smaller, but they were expecting more production of barley, oats, and pulses.

Overall, it hasn’t seemed like grain prices have done much to account for the late crop, and this is because there isn’t a real production issue yet. Until a frost or weather issues actually shows up and the damage is clear, this market is expecting these estimates to be realized. Matt Bennet from AgMarket.net probably said it right in terms of his takeaways from 2019 , “It doesn’t really matter what kind of start you get to the crop, what kind of weather you have during the summertime, what really matters when it comes right down to it is what are the USDA numbers on these crop reports.”

P.S. If you’re planning to be in Woodstock, ON next week at Canada’s Outdoor Farm Show, stop by the FarmLead booth in the FCC tent to see what some new features for grain marketing that we’ve been building in 2019!