Grain markets this week found some gains (finally) as Mother Nature and updated Harvest 2019 estimates catalyzed traders to bid up the lows we’ve been on lately.

Soybean prices in Chicago were buoyed by a drop in production by the USDA in their September WASDE report, but also fresh news of China buying at least 600,000 MT of U.S. beans for October-December movement. This helped canola prices climb a bit as well, although the recent strength of the Loonie has kept the pressure on the Canadian oilseed.

First to report this week was ABARES, who lowered their estimates of the harvest in the Land Down Undaa due to the third straight year of drought conditions in eastern areas. Australian canola production was felled by 300,000 MT to 2.3 MMT, which nearly matches last year’s 2.2 MMT harvest, despite slightly more acres being planted.

On a related note, Strategie Grains lowered its estimate of the European rapeseed harvest to a 13-year low of 17.05 MMT. This new estimate is 350,000 MT lower than their previous estimate from last month, but also a drop of 15% year-over-year.  With the smaller production in both Europe and Australia, more Canadian canola is headed for European markets this year: through Week 5 of the 2019/20 crop year,  total Canadian canola exports are nearly 50% higher than last year with 867,400 MT shipped out. 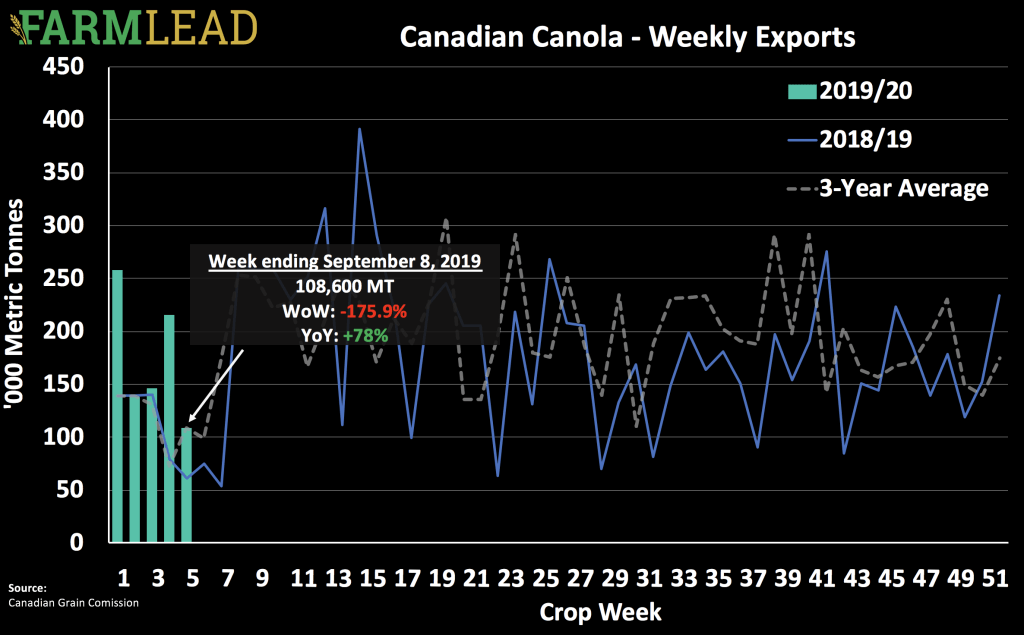 ABARES dropped did raise their estimate of the Australian barley harvest to 9.5 MMT. This is 300,000 MT more than their last forecast back in June and 14% higher than last year’s haul, but still 300,000 MT below the five-year average (which does technically include the record barley harvest in 2016/17 of 13.4 MMT). For wheat, ABARES pegged this year’s output at 19.1 MMT, down 2.1 MMT from their June forecast. This is also about a 10% bump from last year’s harvest, but still 22% below the 10-year average.

Of more relevance was the USDA dropping Australian wheat exports by 2 MMT to 10.5 MMT in their September WASDE. This also explains the USDA’s increase in Canadian wheat exports in 2019/20 by 500,000 MT to 24.5 MMT. We’ll know more about what the Australian wheat harvest truly looks like in about 5-6 weeks once farmers and their combines in the Land Down Undaa start to hit their stride. On the flip side, combines are trying to roll in major North American high protein wheat-producing areas but rain has basically stalled progress. 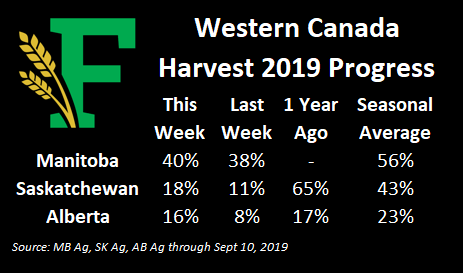 However, the rain falling at this time of year brings back memories of Harvest 2014. That year, rain fell throughout the harvest, seriously undermining the quality of most crops, and, as a result, protein premiums were large and extravagant relative to their averages. That said, I’m not expecting $15 CAD/bushel durum to show back up like it did in the fall of 2014. This is mainly because there is a lot more carryover of durum from both Harvest 2018 and 2017 still in sitting in U.S. and Canadian bins.

However, protein premiums are likely to start showing up, and I think more so for HRS wheat than durum, mainly because the U.S. HRW wheat crop didn’t have the greatest quality this year. Further, as per Statistics Canada’s stocks report from last week, we know that there is way less non-durum wheat being held on farm this year in Saskatchewan and Manitoba. 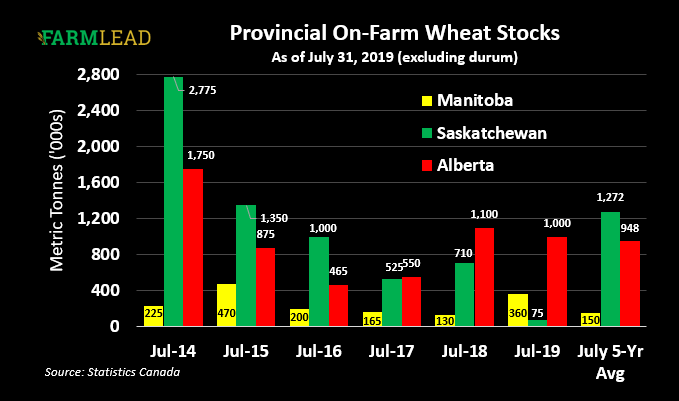 Statistics Canada’s most recent estimate of the Canadian harvest this year suggests there’ll be plenty of wheat to go around. Of note, durum and spring wheat output were increased by nearly 580,000 and 645,000 MT, respectively, while barley production being raised by nearly 350,000 MT from the last estimate and the canola harvest number being pushed higher by nearly 905,000 MT. 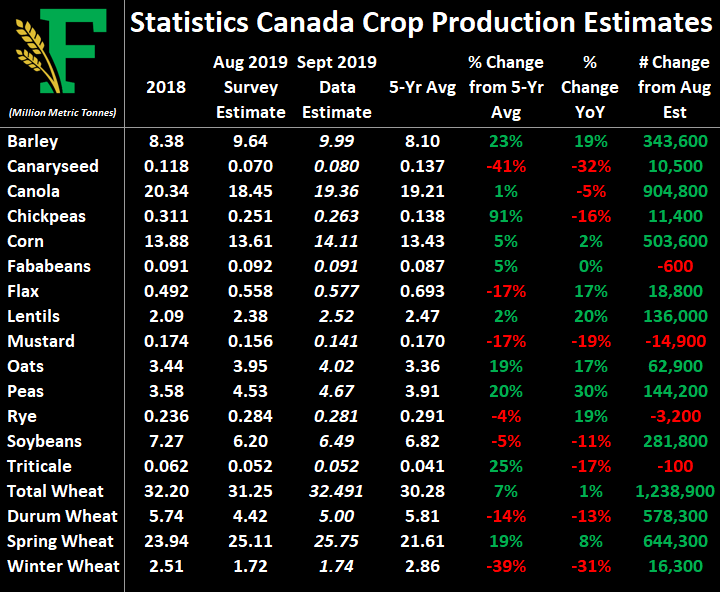 As I mentioned a few weeks ago, this significant bump in the Harvest 2019 estimates from StatsCan was somewhat expected. That said, if history is any benchmark, it’s likely that Statistics Canada will increase its expectation of this year’s harvest yet again, something that they’ve done consistently since they started their model-based estimates back in 2015. For some of the major Canadian Prairies crops, this means that barley production could, theoretically, climb above 10 MMT while spring wheat could top 27 MMT.

Looking across the 49th Parallel, the USDA gave us their September WASDE report, and they didn’t really disappoint too much in terms of lowering yields for U.S. corn and soybeans. Accordingly, American soybean and corn production volumes were reduced as well, but it wasn’t as much as investors were expected, as per average pre-report estimates. From a corn demand perspective, the stocks-to-use ratio is looking like 2016/17. 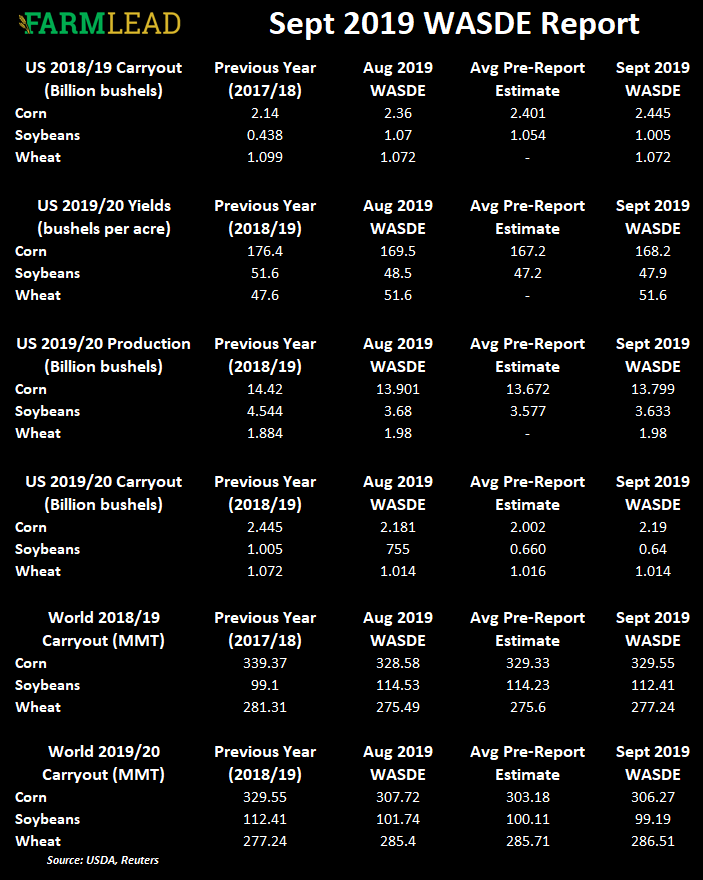 The USDA kept its estimate for corn harvested for grain at 82 million acres in the September WASDE, which, if realized, would be up less than 1% from last year. Similarly, the USDA also kept the soybean area harvested at 75.9 million acres, which would be a 14% reduction from 2018’s area. That said, 8% of the U.S. corn crop is still in dough stage as of this Monday, and 8% of the soybean crop not yet even setting pods.

Accordingly, there’s a significant likelihood that these yield and production numbers will continue to fall. Compounding the reduction in soybean and corn production could certainly be lower harvested acres as the threat of normal frost dates put quite a few acres at risk. Put another way, the U.S. soybean Harvest 2019 could fall by another 200M bushels, while the USDA’s corn production estimate could drop by possibly another 500M bushels by their final numbers in the January 2020 WASDE report.

Ultimately, I view these reports as a blip in the road, mainly because we’re already at the seasonal point in the calendar where lows are seen, something I mentioned in a recent Alberta Express article. More concretely, I’m expecting Harvest 2019 estimates for American soybean and corn production to continue to fall, while the Canadian output numbers should rise. The problem, however, is that the market is trading mainly on the numbers that the government agencies are reporting today. Put another way, the only focus for the next few weeks should be on getting Harvest 2019 in the bin and filling forward contracts made earlier in the year.

Gains ahead of WASDE – this week in the grain markets