If you’re a farmer trying to figure out how to get a handle on fleabane populations, you’re not alone. Last week, it was a top discussion at a grower meeting — Wheat Pete’s Word host Pete Johnson is using that as inspiration to tackle the topic in this week’s podcast.

Listeners will also hear a few corrections from last week, a discussion on map accuracy, and that all-important critical harvest period on alfalfa. Listen now, or download to listen later, offline.

Looking for the winter wheat planting dates? Check them out here. 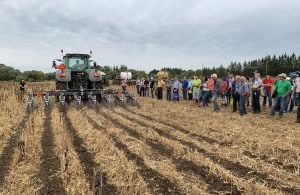 Ontario farmers have been strip tilling for almost two decades, but the soil conservation tillage method appears to be gathering momentum across the province. Ian McDonald, Ontario Ministry of Agriculture, Food and Rural Affairs crop innovation specialist, says part of the attraction of strip till is its ability to capture the benefits of both conventional…Read more »

Corn School: How long does it take to add 1 percent soil organic matter?

Beyond the Bushel — Ep.2: Why Farmers Choose Wheat