While futures markets may be taking a bit of a breather, beef markets are holding strong, with trade into the U.S. and Japan up as well.

“Well certainly markets in the U.S. have still been on an up-trend on the cash side,” says Anne Wasko, of the Gateway Livestock Exchange, in this episode of the Beef Market Update.

In the south, says Wasko, prices were up a couple of dollars last week, and are expected to come in a little higher this week.

“Futures are taking a bit of a breather this week, so we may not get as much as we think by the end of the day today,” Wasko says.

In Alberta, there has been a little bit of improvement on fat cattle prices, but again, says Wasko, we’ll wait to see after today’s trading day.

Meanwhile, choice cuts in the U.S. are moving higher, right in line with what is expected seasonally. “Those markets feel fairly solid,” says Wasko.

From a futures perspective, a breather in the markets could be due to expectations of larger placements in next week’s Cattle on Feed report.

“The market’s just getting ready for these things. I don’t think that’s a big surprise. We’ve had small placements for the last several months, so to see this next report show bigger placements, I don’t think will be a surprise either.”

In calf prices, Canada is seeing a bit of a premium over its U.S. neighbours, similar to the fall of 2017, says Wasko. “Even with a stronger dollar this week, it still leaves these Alberta calf prices above the U.S. equivalent.”

Will the price differential mean we see significant numbers of U.S. feeder cattle into Canada?

Wasko says a good estimate for the year, from January through to December, would be about 200,000 head of U.S. feeder cattle and calves coming north.

Of course, numbers could be challenged by the same pressures as prices (those silaging and harvest challenges, wet weather, and feed prices).

With all the talk of trade deals, will Canada be able to manage with a little bit of competition getting into Japan?

“We’ve had a full year of building relationships…and getting into that market,” says Wasko. “And we just had our August trade data released from StatsCan, and again, Japan continues to shine for Canadian beef.”

In August alone, says Wasko, beef exports to Japan were up 66 per cent over last year.

In other markets, we’ve seen strength in the U.S. But, after a good start in the first half of the year, trade woes in China have proved rather disappointing, says Wasko.

“It’s been a great year for trade, but we’ve got to get some of these things fixed, big time.” 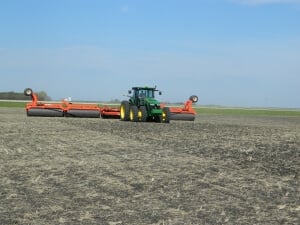 Rolling soybean fields at or just after planting can be most efficient, but planting conditions aren't always exactly rolling-friendly. The good news is there is still time to roll long after seeding, with one very specific no-go window. But first, do you have to roll? That's the question RealAgriculture.com put to Dennis Lange, farm production…Read more »

Growing Phosphorus Disparity Is Not Sustainable