Grain markets found some legs this week as snow and freezing temperatures started to hit the majority of North America’s major growing regions. A few other highlights include indicators that a U.S.-China trade war resolution may be found, as well as the October WASDE report, which was supportive of soybeans but bearish for corn and wheat.

However, a big rally on the aforementioned weather took place Friday that saw both crops earn single-day, double-digit gains. Canola was the only name on the futures board of the grains that didn’t make any gains for the week.

Manitoba and most of the U.S. Northern Plains started getting smacked with snow towards the end of the week. This isn’t great timing as crops have already been dealing with wet and cooler weather over the last few weeks that have impeded the pace of Harvest 2019 progress. Snow also fell on most of Alberta and Saskatchewan last week as a cold front blew through the Prairies (as did any plans to trying to keep getting fields combined).

Quite literally, in this past week’s crop progress report, the USDA said that just eight per cent of North Dakota’s soybeans had been harvested and the corn harvest hadn’t even started yet. In South Dakota, two per cent of corn fields had been cut and five per cent of soybeans had been combined. In Manitoba, 14 per cent of both soybean and corn fields have been harvested as of yesterday’s crop progress report, and overall, 71 per cent of all crops for Harvest 2019 are in the bin, a bit behind the three-year average of 85 per cent. With some decent conditions this first half of the week, combines are pushing hard to get the crop off before what’s expected to be a foot of the white stuff fall, starting tomorrow.

Looking elsewhere, parts of Ontario saw a frost last weekend while it looks like the Corn Belt will get the freezing temperatures this weekend, but not the snow that’s expected in the north. Usually, the “F” word isn’t a big deal for this time of year, except this year, since a lot of the crop planted so late in America’s Heartland, the crop isn’t yet mature and so it is a big deal. Further, in Monday’s progress report, the USDA said that 17 per cent of American corn and 13 per cent of soybeans had been harvested, both below pre-report expectations. For perspective, the five-year average for the harvest completion rate of these two crops through last week is 27 per cent and 34 per cent. Further, last year, 24 per cent of the U.S. corn crop was cut by this time while 31 per cent of soybeans were combined.

In the October WASDE, corn yields were raised by 0.2 bushels per acre (bpa) to 168.4 while American soybean yields dropped by a full bushel to 46.9 bpa. The decrease in soybean yields was a function of weaker pod weights offsetting an increase in average pod counts numbers, although the USDA also lowered harvested soybean acres by 140,000. 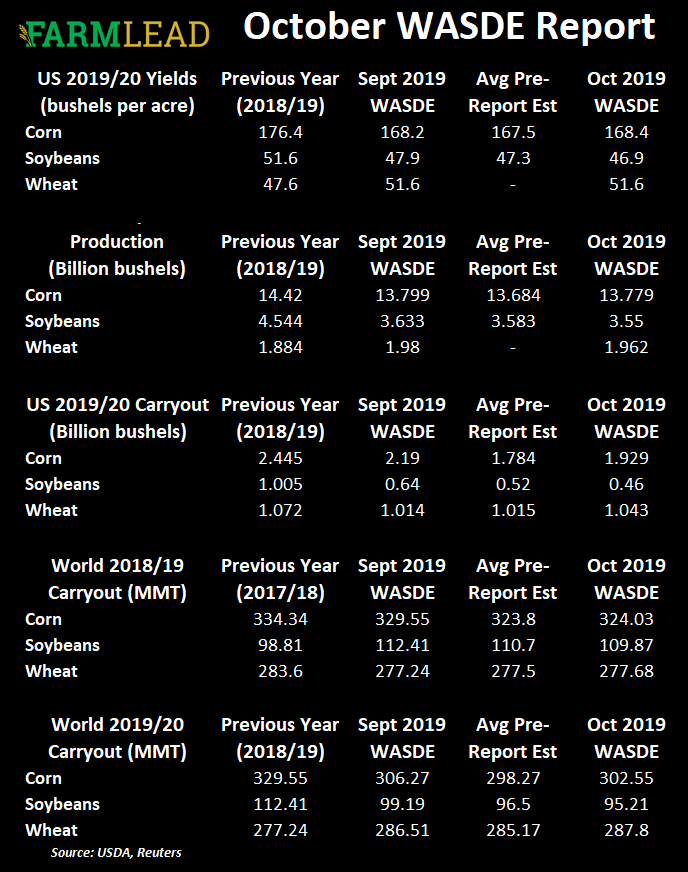 On the stocks front, US soybean carryout for 2019/20 was lowered pretty significantly to 460M bushels, down 180M from the September WASDE report. This is actually pretty incredible considering that, back in June, U.S. soybean 2019/20 carryout was estimated at 1.045 billion bushels! That’s quite a drop. U.S. soybean exports were held at 1.775 billion bushels (or 48.31 MMT if converting bushels into metric tonnes), which would be about a 1.6 per cent increase from 2018/19’s shipments. That said, through Week 5 of the 2019/20 crop year, U.S. soybean exports are tracking about three per cent higher than last year with 4.03 MMT shipped out. 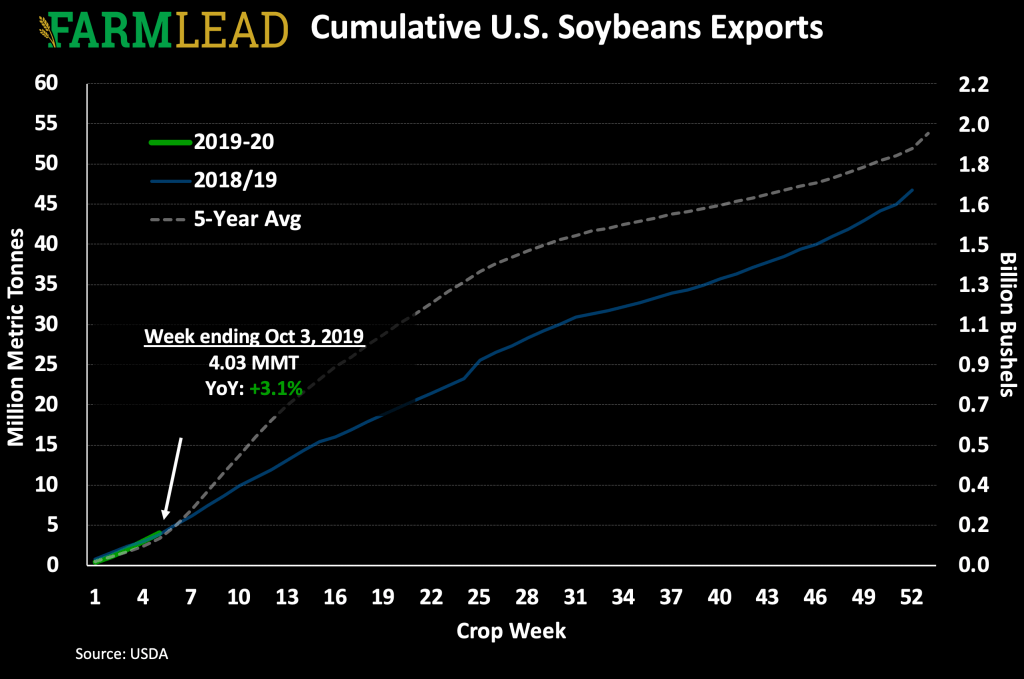 Looking globally, only wheat stocks were raised, but global corn inventories came in larger than what the trade was anticipating. Both Australia and Canada saw its wheat production estimates lowered by 1MMT and 300,000 MT respectively, with the estimate for the former now matching the USDA’s Aussie attaché’s estimate of 18 MMT. However, the Canberra office for the USDA said that Australia will only be able to export 9 MMT of wheat this year, versus the official USDA estimate of 9.5 MMT. Regardless, if realized, it would be the worst number in a decade.

For a few weeks now, Mother Nature has not really been the best partner for Harvest 2109. With the ongoing delays to this year’s combine campaign, the quality of remaining pulses and cereal crops yet to be harvested is not likely to be all the great. As of yesterday’s Saskatchewan crop report, more than two-fifths, or 41 per cent, of the province’s durum crop was not yet in the bin. In North Dakota, as of last Sunday’s crop progress report from the USDA, 21 per cent of the state’s durum fields had not yet been combined. In Montana, 36 per cent of durum fields still haven’t been harvested.

Put bluntly, there is a significant amount of the North American durum crop that’s still not yet been combined and likely won’t any time soon, creating scenarios of some pretty solid premiums for #1 and #2 grades. The main issue is the increase in sprout damage, and accordingly, a decline in the Falling Number, an important characteristic for the milling market. In the last week or so, we’ve seen a bunch of durum deals on the FarmLead Marketplace close for $8.50 CAD/bu and sometimes higher depending on movement period and quality characteristics. As you can tell from the chart below, durum prices are certainly improving. 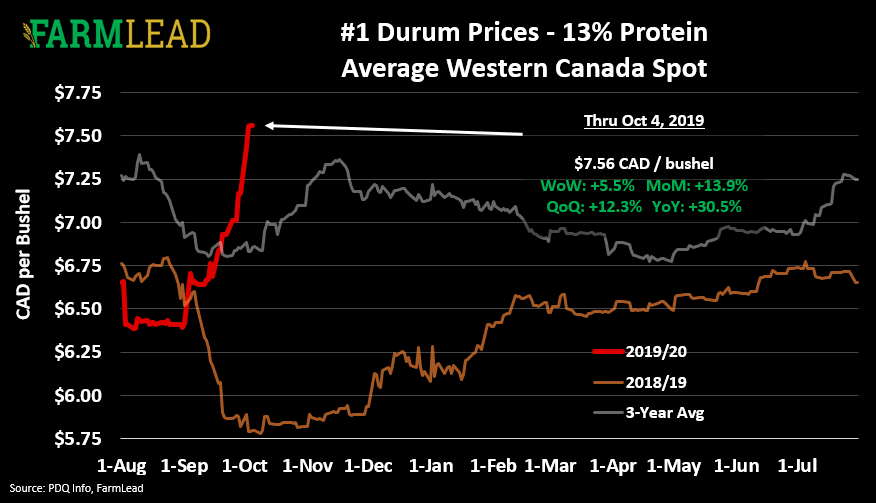 In the world of pulses, we already know that there’s a bit of a quality divide on lentils, as after the rains fell in mid-September, there was the split between good and poor quality. Mustard is grown in a lot of the same areas in Western Canada as lentils and so it’s no surprise that mustard quality is also going to be a big question mark. Ultimately, I will reinforce the need to get your peas, chickpeas, lentils, or mustard tested since It’s probably worth waiting a bit, before selling something (but only if your cashflow situation permits it). 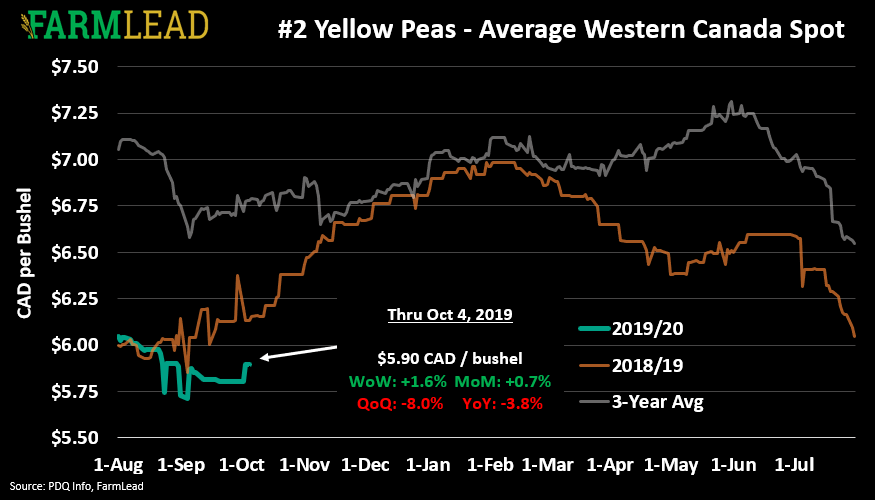 Overall, between a slightly bullish September WASDE, the ongoing weather issues plaguing Harvest 2019, or the optimism of a trade war deal being found, there seems to be more opportunity to the upside than downside risk for the grain markets. Put another way, grain markets are working past the harvest lows.

Happy Canadian Thanksgiving and I hope you have a great long weekend. 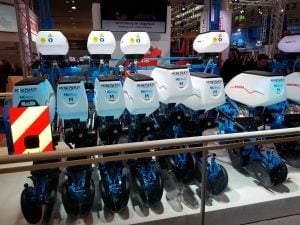 Selling the Rumour — This Week in the Ag Markets