Grain markets finished the fourth week of October with the same headlines running the complex: harvest weather/challenges and a trade war deal between the U.S. and China. Soybeans saw a big sell-off on Friday though as speculators sold off positions ahead of the weekend with no confirmed news of a deal between the world’s two largest economies, as well as grain buyers hedging their anticipated weekend deliveries of freshly-harvested beans. Corn also fell a bit on grain elevator pre-hedging but weekly losses were more so attributed to weaker demand fundamentals.

In last week’s grain markets update, I referenced “Phase One” of a trade deal between China and the United States. This week, Chinese officials suggested that if a deal were found, China would buy $20 Billion of American farm goods in the subsequent 12 months. However, the Chinese are looking for more U.S. tariff cancellations in order for them to commit to buying more American soybean exports and other products.

President Trump has only agreed, so far, to cancel the increase in tariffs on $250 Billion of Chinese goods that was set to come into effect on October 15th. China is supposedly looking for the U.S. to walk back on two major items: first, the September 1st tariffs on $125 Billion of Chinese products, and, second, the planned tariffs on an additional $156 Billion of Chinese goods set to go into motion on December 15th. In order to put pen to paper, it’s expected that more face-to-face discussions will take place the first week of November in China, before Presidents Trump and Xi would officially sign something in Chile at the APEC summit later next month.

All this in mind, more American soybean exports have been picked up by China as of late, including another 264,000 MT yesterday. However, that was more than half of all soybean export sales from last week, as the 475,200 MT contracted came in well below the market’s expectations of at least 700,000 MT in sales. Conversely, there are some rumours that China bought another 10 boats of Brazilians soybean exports for Feb-July 2020 delivery, which would continue to suggest that dollars and cents are guiding current purchasing by Chinese players right now.

From an actual shipment standpoint, U.S. soybean exports are currently tracking 3% higher than last year with 6.37 MMT sailed through Week 7 of the 2019/20 crop year. It’s worth mentioning that Canadian soybean exports are performing well compared to years past, with nearly 553,000 MT shipped out through Week 11 of its crop year. That’s good for a 44% jump compared to the same time a year ago. 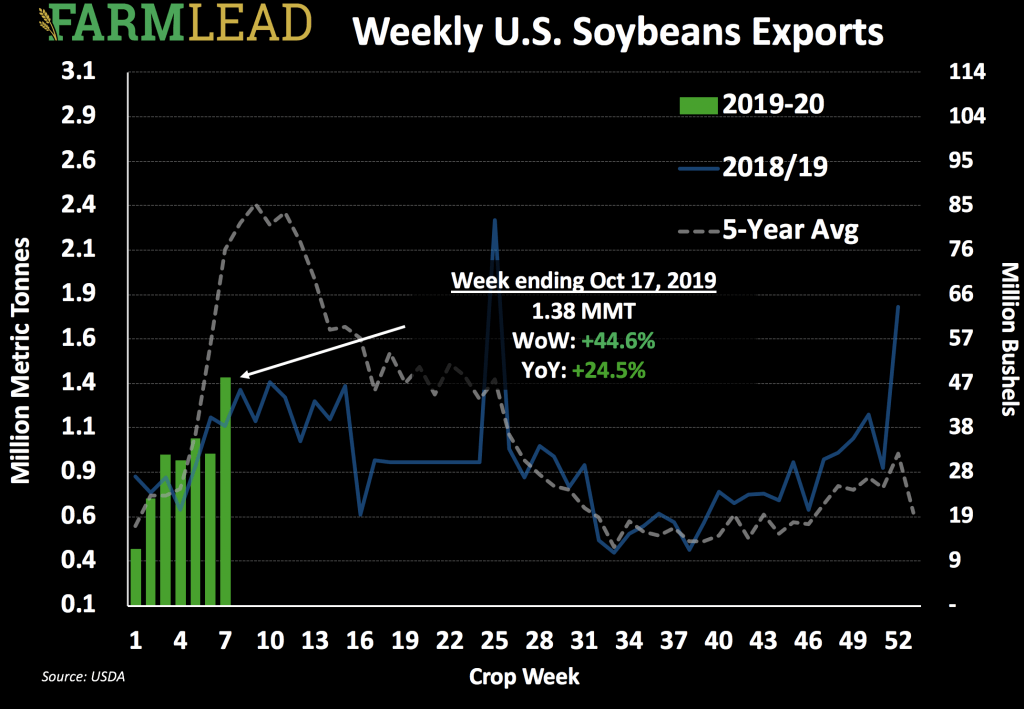 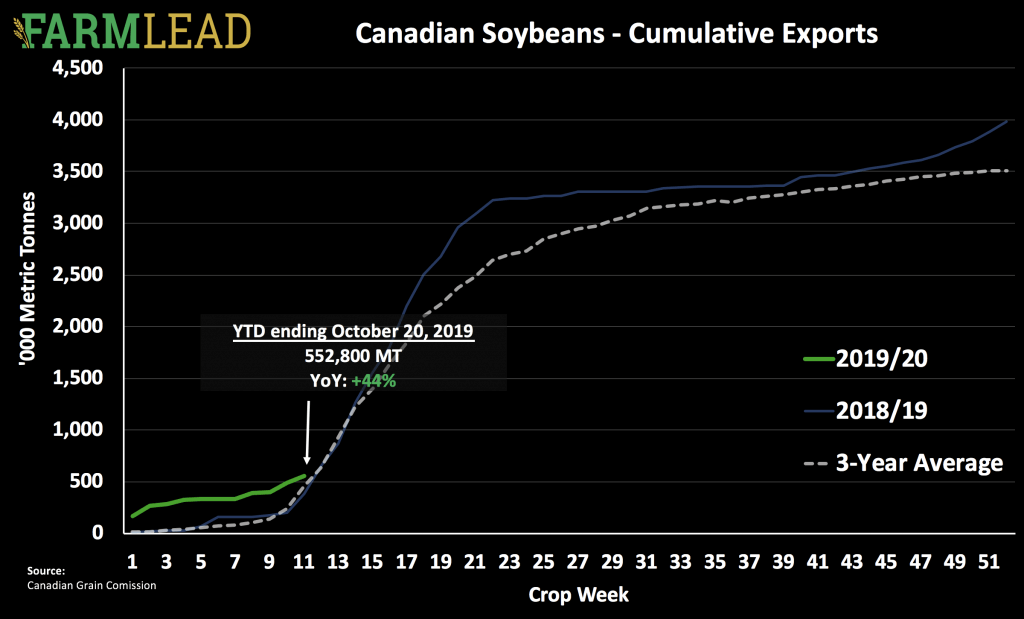 Also in last week’s update, I talked about how canola exports to Europe could be a catalyst to higher canola prices. However, canola prices are battling against weaker demand from China and that’s what is keeping them sort of rangebound. In fact, in an interview with RealAgriculture, one of Viterra’s analysts suggested that, if canola exports don’t perform well this year, 2019/20 canola ending stocks could possibly see a carryout of 6 -7 MMT! Compare this to Agriculture Canada’s most recent estimate for 2019/20 canola carryout to come in at 4.7 MMT, up 200,000 MT from their September estimate. 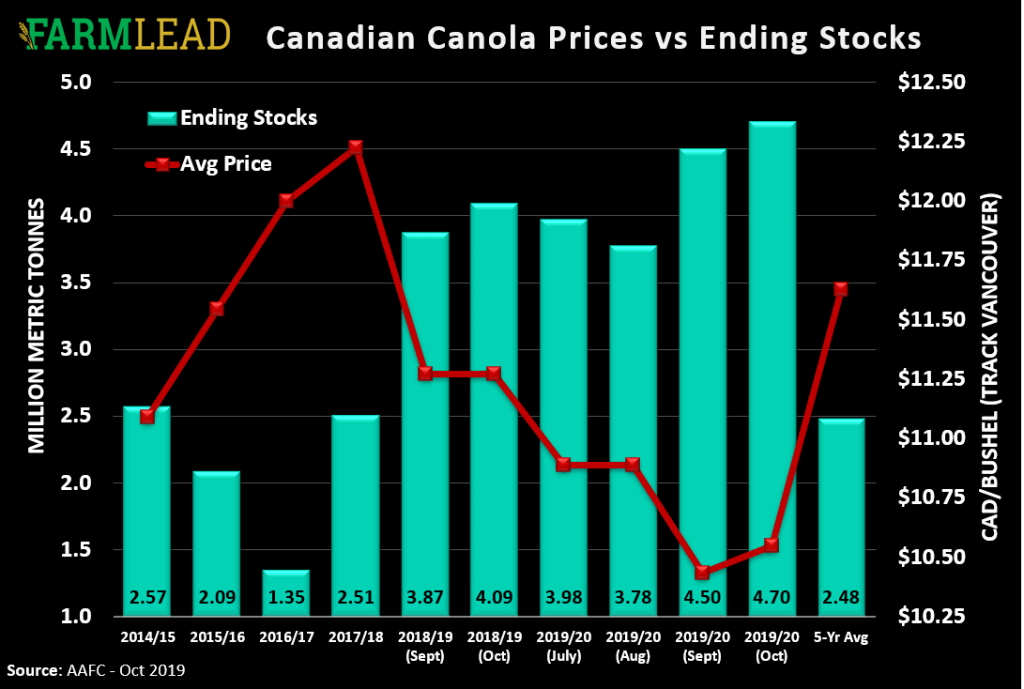 That said, we should continue to expect Canadian canola crush volumes to remain elevated as crush margins of about $100 CAD / MT are double what they were at this time a year ago. Canola prices are also battling against the recent strength of the Canadian Loonie.

On the bullish side of things, we know that more than 18% of canola fields in Manitoba have not yet been combined, 20% in Saskatchewan, and a significant 40% in Alberta. A weather system with cooler temperatures and snow is making its way across the northern half of the Canadian Prairies through Monday, which is where a lot of that remaining canola crop is. Across all crop types in Western Canada, some solid progress was made in Saskatchewan and Alberta last week, but Manitoba was relatively quiet. 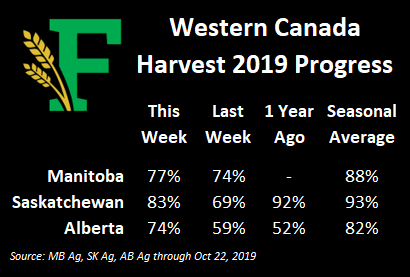 Wheat markets were mostly lower this week on good planting pace of winter wheat in the Black Sea and the U.S. Northern Plains. Winter wheat area seeded in the Ukraine is a little bit behind, largely due to dry conditions there, but some better moisture and warmer weather in Russia is helping fall seeding.

The International Grains Council just lowered its global wheat production to 762 MMT (USDA is currently at 765 MMT), with the 2 MMT decline from their previous estimate almost wholly attributed to the Land Down Undaa. The IGC believes that Australian farmers will produce 17 MMT of wheat in their 2019/20 crop year, which is somewhat in the middle of the range of estimates.

Finally, we end with this week’s Canadian federal election.

On Monday, the Liberals and Prime Minister Justin Trudeau were able to win a minority federal government, but the fractured nature of the Canadian vote is alarming. Save for Vancouver and parts of Winnipeg and Edmonton, the obvious political discontent of the Western Canadian provinces is marked, with a lot more talk of separation and/or more provincial power, much like what the Bloc Quebecois campaigned on. In fact, Saskatchewan Premier Scott Moe, as a self-proclaimed, “frustrated federalist,” put out a definitive statement, calling on Ottawa for immediate action. His proposed “New Deal” consists of (1) a repeal of the carbon tax, (2) new formula for equalization payments, and (3) pipelines.

There are some legs behind Premier Moe’s statements, especially considering that the Conservative party won the popular vote, but obviously not enough seats to earn their own minority government. Historically, minority governments tend to be more sensitive to supporting interests of the other parties that support said party in the minority position of power. This likely means that the Liberals will look to win over the NDP and Green Party for any legislative support.

In their platform, the Liberals said that they wanted to provide more funding for expanded business risk management programs, easier farm succession rules, and more canola going into biofuel. There was also some suggestion that the Liberals will shake up Farm Credit Canada, renaming it Farm and Food Development Canada, and expanding its financial and advisory services.

As it relates to all Canadian agriculture, many in the industry, including yours truly, are not expecting the Liberals to change much policy. Ultimately, many are just looking for the federal government to “get back to work” and fix trade and give Canadian agriculture a fighting chance. However, minority governments don’t have a track record of lasting the full 4 years and so it’s more likely that we’ll go back to the polls within the next year or two.