Grain markets had a mixed week as the complex tried to decide what’s more important: winter weather messing up harvest progress, the possibility of a China-U.S. trade deal, and wheat production concerns. The down week for corn and soybeans was likely a result of physical buyers putting in hedges ahead of the weekend, one that’s likely going to be a big harvest weekend across the Midwest.

Put another way, grain buyers and speculators are making moves based on the possibility of combines rolling over the coming few weeks, and not what has not happened in the past few weeks While it’s not moving grain markets, it’s worth mentioning that we’ll see the Canadian federal election on Monday, October 21st.

Chicago wheat prices hit three-month highs this week on production concerns in the southern hemisphere. The National Australia Bank recently dropped its estimate of the wheat harvest in Australia to 15.5 MMT – well below the 19 MMT that most other players, including the USDA, are estimating. Dealing with a third straight year of drought, it’s expected that other players will take up Australia’s lost ability to meet the same volumes of wheat, barley, and canola exports of years past. Also, a lack of rain in Argentina has the Buenos Aires Grain Exchange suggesting that wheat yield losses could top 40%. Last week, the firm dropped its estimate of their 2019 wheat harvest to 19.8 MMT (the USDA is currently sitting at 20.5 MMT).

Here in North America, Manitoba, southern parts of the Corn Belt, Minnesota, and other areas surrounding the Great Lakes are expected to receive more rain over the next week. For the Canadian Prairies, harvest progress continues to be well behind seasonal averages and many, including yours truly, are hoping for some dry, sunny, and even windy weather before the month of October ends. 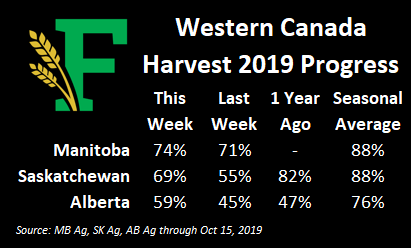 South of the 49th parallel, freezing temperatures are also expected across said Great Lakes and the eastern Corn Belt will likely kill off any crops not yet mature. For those fields that are ready to combined, they’re going to be tough to get to, but leaving them out over winter isn’t the best idea, especially soybeans. Looking more long-term, the NOAA is expecting the Northern Plains to have a winter that’s a little above-average on the precipitation side of things. 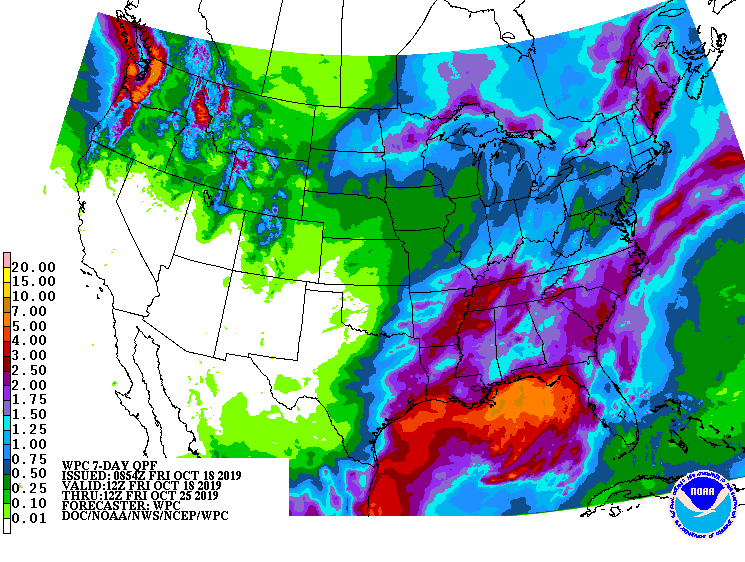 While we’re waiting to see more combines in the field, we’ve started to see more Canadian canola heading to Europe. In the first 10 weeks of the 2019/20 crop year, more than 191,000 MT of canola has been loaded through the Northern Ontario port, nearly 9 times the volume of canola exports shipped out by this time a year ago. Aggregately, through week 10, Canadian canola exports are tracking 2% higher year-over-year with 1.52 MMT sailed. 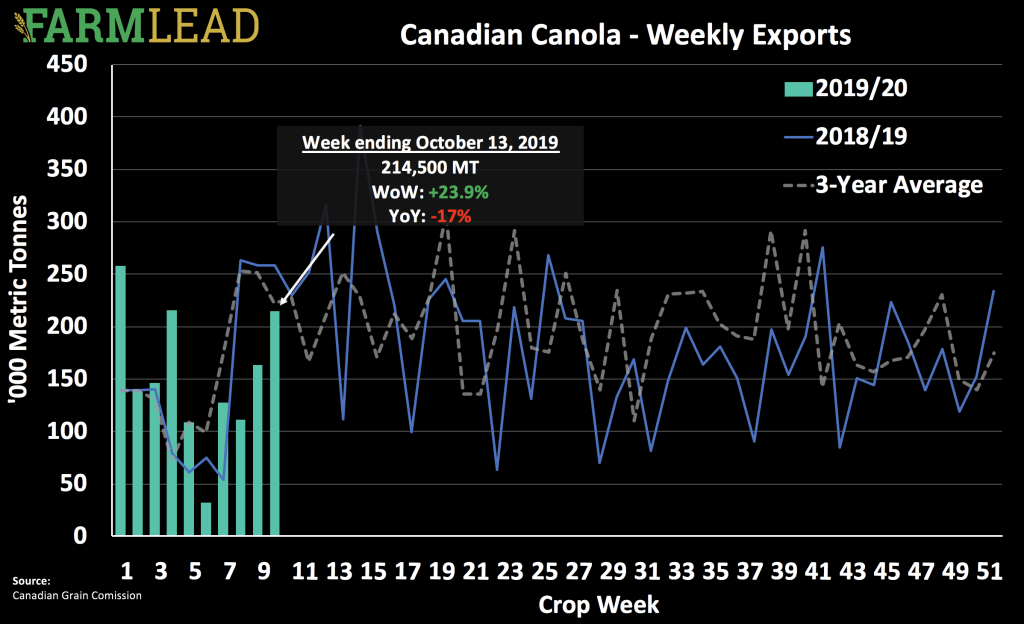 One of the main reasons for the increase in canola exports is the smaller rapeseed crop out of Europe. We know countries like France (and the rest of Europe) are looking for more canola/rapeseed after this past year’s significantly lower harvest. Combine this with the fact that Australia’s canola exports are expected to be lower, Canadian canola exports are best poised to fill the gap here.

The French agriculture ministry just updated its Harvest 2019 numbers, saying that the country’s rapeseed harvest fell by nearly one-third from last year to 3.54 MMT, or a drop of nearly 1.5 MMT. While yields were the same last year, it was the harvested area that also dropped by a third. It’s worth mentioning that Strategie Grains estimates next year’s 2020 harvest of EU rapeseed at 19.3 MMT, thanks to an area seeded bumping up 7% year-over-year to 13.7M acres. Put simply, the opportunity to gain some EU market share for Canadian canola exports is now!

In other crops, the French farm ministry said the country’s barley production this year would top 13.64 MMT, good for a 22% bump from last year’s smaller harvest. This was mainly because of France’s barley yields jumping 13% from last year and harvested area expanding by 9% to 4.76M acres. On the other side of the coin is the French durum harvest. Harvested area of the pasta-making wheat dropped by nearly a third, but yields improving by 22% from last year equated to total durum harvest in the country of 1.566 MMT. This would still be a drop of about 13% of 230,000 MT from last year.

Intuitively, this is also a potential window of opportunity for international players to increase their durum exports to the EU. Worth noting is that, through Week 10 of the 2019/20 crop year, Canadian durum exports are tracking 57% higher year-over-year at 920,700 MT.

To wrap things up, earlier this week, the U.S. and China agreed in principle to a “Phase One” deal that would halt the tit-for-tat tariff trade war from continuing (there were new U.S. tariffs on Chinese goods were set to go into effect next week). It is rumoured that China agreed to $40 – $50 billion in U.S. agricultural products over the next 2 years, including pork, white and spring wheat, sorghum, ethanol, and at least 30 MMT of soybeans. In reality, the U.S. hasn’t sold more than about $29 Billion of agricultural goods to China. Further, Chinese negotiators are adamant about the purchases being at fair-market prices and based on actual demand needs. That said, China bought more soybeans from Brazil this week driven by said fair-market prices, and not policy.

For China, the big win here is that they don’t have more tariffs put on their goods. Since the start of the trade war last year, China has had tariffs imposed on more than $360 Billion of their goods, while China has put about $100 Billion worth of tariffs on U.S. goods (notably soybeans). The promise of purchasing more farm goods would help put a dent in the quite large trade deficit that the U.S. has with China.

The kicker here though is that, if China has to ask its state-owned players like COFCO to buy more American, this is essentially what the World Trade Organization would call “managed trade”, something that’s illegal.  The one thing that China probably needs more of than anything right now is protein, and mostly in the form of livestock. Pork prices in the People’s Republic jumped by 69% in September, compared to the same month in 2019. That’s up from the 50% year-over-year jump in August, as China continues to battle the spread of the African Swine Fever from culling even more than the estimated 50% reduction of the pig population. Even in Vietnam, the size of the country’s hog herd has dropped by 20% due to the virus.

Let me be clear though: the end to the trade war is not here, so don’t pop that champagne bottle just yet. Put simply, this is not a done deal and it’ll take a few weeks just to get everything onto paper, reviewed, and then, ultimately signed. In the meantime, the International Monetary Fund says that the trade war between the U.S. and China has had a major ripple effect around the rest of the world, and that global growth is expected to be its slowest since the financial crisis a decade ago.

Applying the lessons of 2022 to marketing opportunities in 2023

Thanks for tuning in to this Agronomic Monday edition of RealAg Radio, brought to you by Proven Seed from Nutrien Ag Solutions Canada. Host Shaun Haney is joined by Peter ‘Wheat Pete’ Johnson, RealAgriculture’s resident agronomist, to discuss the winter wheat outlook, compaction impacts on frozen ground, and high levels of productivity. You'll also hear…