From the two brothers working on identifying the disease across provinces, to the sister-like relationship between soybean cyst nematode (SCN) and sudden death syndrome, it’s a family affair when talking SCN.

Albert Tenuta, plant pathologist for the Ontario Ministry of Agriculture, Food and Rural Affairs, joins RealAgriculture’s Bern Tobin for this episode of the Soybean School to have a post-harvest discussion on soybean cyst nematode testing and long-term management.

Tenuta says that the pest is definitely on the move not only in Ontario, but also has now been confirmed in Manitoba (by Tenuta’s brother Mario Tenuta of Manitoba Agriculture).

In the video below, Tenuta covers where the pest has been found, and how best to clue in that the soil-borne pest may have moved in to your area, though it’s true that when populations are low there are few above-ground symptoms.

With that said, Tenuta says:

There is genetic resistance to SCN, and it has worked well, but the nematode is beginning to adapt to that resistance, Tenuta says. Just like with any other crop protection product, you need to evaluate the product (variety), to see if it is working as it should. There are some other sources of resistance that are coming online, and could certainly be a pat of an integrated management program.

And what about this connection to sudden death syndrome (SDS)? “They’re like sisters,” Tenuta says, of the two diseases. As SCN numbers creep up in the soil, you’ll start seeing higher SDS in those fields, too. If you manage for one (nematode), you reduce the risk of the other, he says.

There are targeted seed treatments available, and combined with tolerant or resistant varieties, Tenuta says there are plenty of tools to combine into a long-term management plan. And that all starts with a soil test to determine presence and levels of the nematode. Once the beans are off, get soil testing, he says — or have someone do it for you at the same time you’re having a soil test done for fertility levels. Split the sample and kill two birds with one stone. 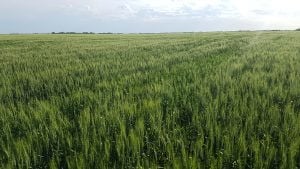 Farmers Edge is preparing to become a publicly-traded company. The Canadian digital agriculture business, which was co-founded by CEO Wade Barnes at Pilot Mound, Man. 16 years ago, has submitted a preliminary prospectus with authorities in each Canadian province and territory, and received a receipt for an initial public offering. In the prospectus, the company estimates…Read more »

Soybean School: Think P and K for pods and yield