Grain markets entered November on a mixed-week of performance, but most grain prices did find some positive gains for the month of October. Canola and hard red spring wheat were the only futures markets who didn’t find positive gains in October, suggesting that the price run-up at the end of September might’ve priced in anticipated harvest delays.

While quite a lot of the U.S. corn and soybean crop remains unharvested, Western Canadian farmers are nearing the finish line. Conversely, ongoing rains in Eastern Canada have create a stop-and-go pace for farmers, similar to what many farmers in the Prairies have faced for the past few weeks. In parts of Iowa, farmers can’t even get into the fields and across the Northern Plains, the combination of snow, rain, wind, and sun has created pockets of dirt that are more like trampolines than solid ground to work on. Ultimately, it looks like more farmers in both Eastern Canada and across the northern United States are going to have to wait for the ground to freeze before getting into the field. 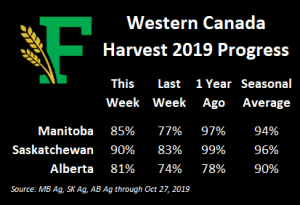 That said, there’s certainly have been concerns about the quality coming off, especially in cereals. This in mind, Italy has returned to the Canadian market as they look for quality durum, supporting both Canadian durum exports, and therefore, Canadian durum prices. Accordingly, durum exports are tracking 72% better than a year ago through Week 12 of the Canadian 2019/20 crop year. Understandably, with the increased international demand, as well as quality concerns from this year’s harvest, average durum prices in Western Canada for spot movement are sitting nearly a third higher than where they were a year ago.

Similarly, we know that lentil exports started hot out of the gate, which is part of the reason why we’ve seen lentil prices improve a little bit over the course of October. We know that India though is likely the main factor behind the improvement in lentil prices on concerns about their pigeon pea crop. While green lentil prices have climbed up to 24¢ – 25¢/lb, further gains are likely limited by geopolitical uncertainty in the Middle East and competitive export pressure from Black Sea producers. 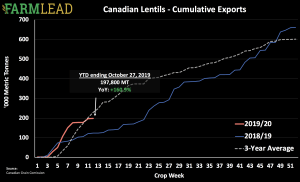 In some disappointing news, Chile has decided to walk away from its duties to host the Asia-Pacific Economic Cooperation summit later this month due to ongoing riots in their country. It’s disappointing because it was expected that this is where U.S. President Trump and Chinese President Xi would sit down and sign “Phase One” of a new trade agreement.

While we know negotiations will continue over the phone, President Trump tweeted out on Thursday that Phase One represents “about 60% of a total deal” that he’s looking to make. In the meantime, grain traders are battling through the weaker international business (notably, corn and soybean exports), with Bunge CEO Greg Heckman saying on this past quarter’s earnings call, “I don’t know that we could see a much more difficult environment.”

With a trade deal teetering on the table, the market is looking for some sort of assurances in November that something is going to get done. The Chinese might be feeling a little bit more pressure to get something done as protein prices continue to climb, pushing up food price inflation, a major indicator of economic health in the People’s Republic. Chinese pork prices are currently tracking towards $8 USD/kg (or about $17.70/lbs) as the smaller hog herd (due to African Swine Fever) and colder weather in the People’s Republic have had a doubly bullish impact on prices. Between the supply and demand side of things, the pork shortage is pulling up prices for other meat, like beef and lamb. The multi-billion dollar question is, at what price will Chinese consumers stop buying meat because it’s too expensive? Major pork exporters like Canada and the U.S. can help, especially when Chinese hog prices are currently trading five times higher than that in America.

Part of the trade deal between the U.S. and China will likely include more soybean business. Thanks to the current 25% import tariff, U.S. soybean prices are certainly depressed, and if soybean exports were tracking a little closer to their five-year averages, soybean prices would also be performing a bit better. For example, last week, China accounted for over half of the nearly 950,000 MT of U.S. soybean sold. However, through Week of 8 of its crop year, U.S. soybean exports have totalled just under 8 MMT, so the next few weeks could be very important as they precede the Brazilian soybean harvest starting up in early January. 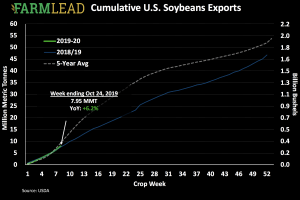 Rabobank thinks that that the longer-term outlook for soybean prices is weak, given the ongoing trade spat between the U.S. and China and the uncontrollable spread of the African Swine Fever disease. They estimate the African Swine Fever virus has cost soybean prices about 50¢ – $1 USD/bushel, while the trade war has added another $1 – $1.50/bushel of a price reduction. Put another way, without these two factors in play, soybean prices might be closer to $12/bushel in Chicago than the $9.35 they’re hovering around.

Canola prices are pacing alongside soybean prices with the similar dynamic that the market is looking for an increase of canola exports to China. That said, Canadian and Chinese officials chatted face-to-face this week in Switzerland at the World Trade Organization about Canadian canola exports. Through week 12, Canadian canola exports topped 2 MMT, good for about a 2% bump over the same week a year ago. That said, much like soybean prices, canola prices seem to be rangebound, looking for that next major supply or demand headline that’s going to bring the market to a new territory, be it lower or higher.

Overall though, harvest 2019 isn’t finished yet, and there isn’t a lot of optimism for the crop that’s still left out in the field, be it the quality or final quantity coming off, or just getting it off at all until springtime. As the market moves its focus away from harvest, trade deals and broader market factors (i.e. exchange rates) will take a bigger spotlight.

Have a good weekend, and if you’re still out in the field, keep safety a priority!

5 takeaways from the 2020 Crop Production Show

It was a very frosty week in Saskatchewan, which felt just right at -50 degrees Celsius. Inside the walls of Prairieland Park at the Crop Production Show, farmers were in a relatively good mood despite roughly 10% of the 2019 crop still out in the fields. After three days at the show, I decided to…Read more »

Yield and production speculations — This week in the grain markets