Grain markets ended a shortened-trading week mostly in the red as the complex pulled back on concerns over a trade war deal getting done and ongoing weak demand fundamentals. While many analysts are saying that corn and soybeans are oversold and nearing technical support levels, the only thing that seems to be strengthening is basis levels for the two crops. Globally, there’s a lot of grain out there, but with readily available corn and soybean supplies in shorter supply in a few specific regions, local basis in these areas are starting to improve.

That said, I’m seeing more recommendations from grain marketing consultants to increase 2019 corn sales using basis, while waiting to lock futures at a later date. Any improvement in the demand fundamentals should likely push futures higher, but that’s a tough game to play day-to-day. Nonetheless, we did see U.S. soybean export sales this week come in at the top end of expectations with 1.253 MMT contracted, but corn and wheat sales were weak.

Reuters noted that that since the U.S. soybean marketing year began, China’s buyers have committed to buying 8.04 MMT of American soybeans, of which, 3.15 MMT have sailed. For context, two years ago before the trade war began, 18.65 MMT of American soybeans had been purchased by Chinese buyers, with 13.3 MMT sailed through mid-November 2017. Thinking more positively, this past week’s NOPA report for October crush showed that 175.4 million bushels of soybeans were used. This is a new record for the month of October and more than 9 million bushels above the market’s expectations. 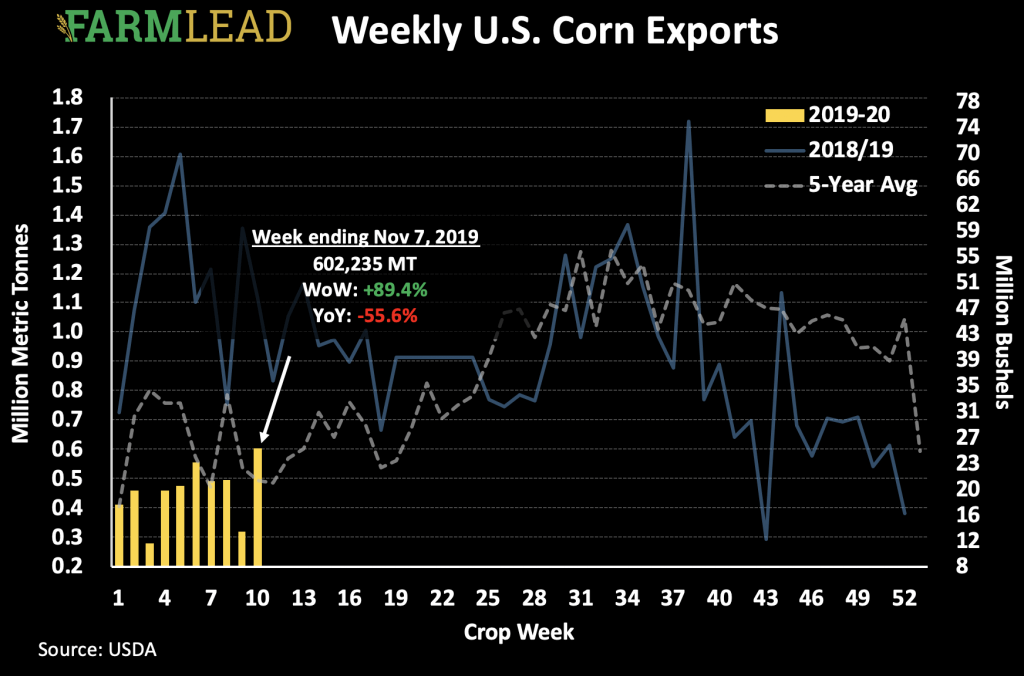 The wheat market found some strength on Tuesday with better-than-expected export inspections in the U.S., record cold in major winter wheat growing regions in the Southern Plains, and production issues in Argentina and Australia. However, these gains couldn’t be held as corn markets pulled wheat lower. 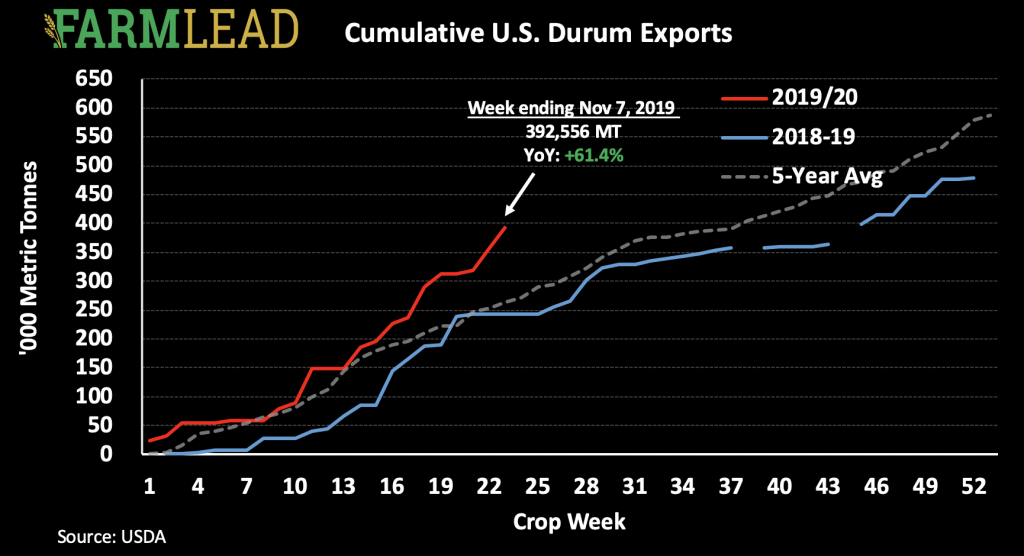 Across the border, through week 14 of the 2019/20 crop year, Canadian durum shipments are performing well with 1.3 MMT sailed, good for a 57 per cent improvement year-over-year. Conversely, non-durum wheat exports are tracking nearly 10 per cent behind last year, with just 4.57 MMT sailed so far. 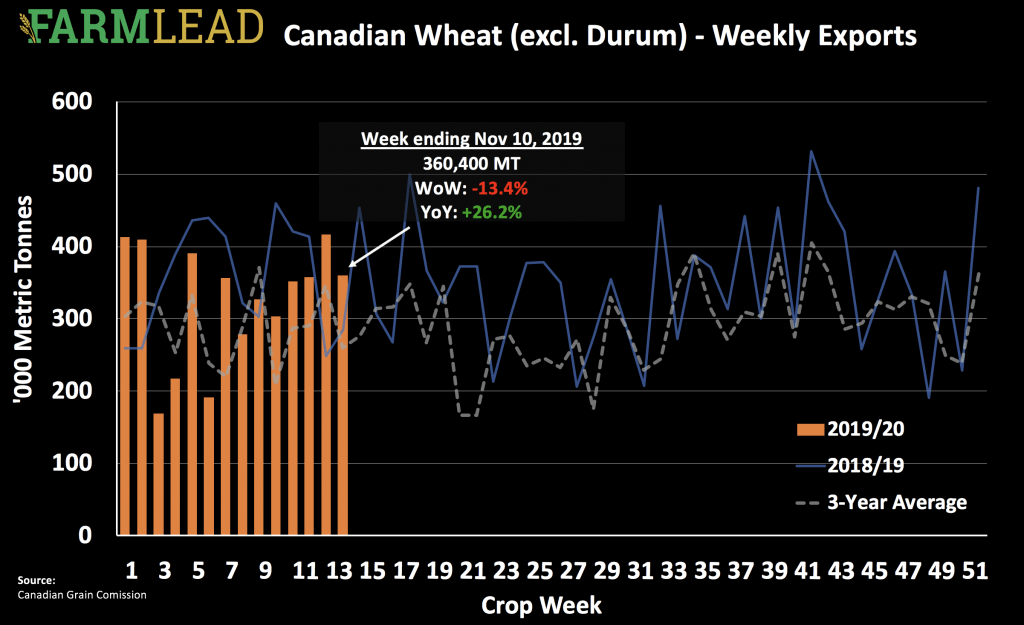 For many Western Canadian wheat farmers, falling numbers continue to be heavily scrutinized by major companies, with reports that anything closer to 300 seconds is not meeting contract specs and being rejected. This is obviously a major point of contention with producers as falling number is not an official grading requirement from the Canadian Grain Commission.

That said, this reinforces my #2 rule of grain marketing: know your grain’s quality. Go out and get it independently tested. If you’re balking at the cost of getting your grain tested by an unbiased player, then factor that test cost into your aggregate cost of production, and you’ll realize it’s likely about 50¢ – $1.50 per acre. Not that heavy of a burden, when you’re potentially leaving upwards of one thousand dollars on the table not knowing what you have.

Finally, looking at the trade war, China ended a five-year ban on American poultry products, which re-opens the door for what some are estimating to be between a $1 and $2 Billion USD per year market. There are also rumours that China is buying as much meat from Australia, Argentina, and Brazil as they can, making it clear that the People’s Republic is looking for protein to ease consumer inflation levels, which are already at fresh eight-year highs.

While China scrounges around for protein, they and American trade negotiations are again having a tough time nailing down final trade terms for a trade war deal. There is certainly some optimism of a trade war deal getting done thanks to the opening up of U.S. poultry exports to China, but the subject of tariffs is still in the way. China seems to be a bit hesitant to agree to a specific dollar amount of American agricultural products that they’re willing to buy. Conversely though, they want a firm commitment that the U.S. will relax tariffs on their goods being shipped across the Pacific to America.

One may posit that China is just biding their time as they watch how the impeachment hearings in Washington play out. Regardless, President Trump, speaking at the Economic Club of New York this past week, said that the U.S. would raise tariffs “very substantially” on Chinese goods if a trade war deal isn’t signed soon. And so, just as officials were literally working on logistics to for Presidents Trump and Xi sign Phase One, talks have seemingly stalled again. While most of North America will get some warmer this week, grain markets are also hoping for some warmer trade talks and the damn thing gets signed already!