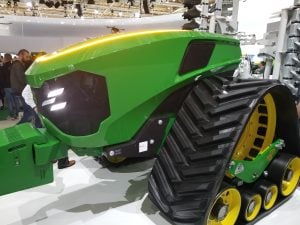 In the John Deere future farming zone at Agritechnica there was much to discuss and consider about the possible future of how crop production will look.

With the advancing discussion on robotics and the role that autonomous tractors could play in the future, John Deere has turned some heads with this electric concept. What catches peoples eye right away in the one-axle design that is a new step in the robotic space.  Many of the robotic concepts seen at this show the past four years are either “how to turn your current tractor into an autonomous vehicle” or miniature units swarming the field. I think John Deere has moved to a new lane in this discussion.

Among all of the concepts shown in the future farming zone I think that this was the most divisive for some farmers. In talking to attendees there were people that found it to be ridiculous and others liking the design and possibilities.

Even John Deere was quite honest that today’s battery technology is not capable of providing enough power or battery life to support a 300-horsepower tractor in this configuration. The demo unit that was shown on screen displays at Agritechnica was powered by a cable and not batteries.

Features of the concept

Although a very unique and tremendously interesting concept, there are many what-ifs when it comes to this design. Although I liked the idea of the articulated steering working in tandem with the back axle of the implement, the practicality of having a whole new line of implements to work with the tractor is a deterrent. Having said that, this is similar to the direction that autonomous Canadian company Dot is taking so it’s not unique, in that sense.

Whether it is even feasible commercially is another story, but it will be interesting to see how and if it develops.

Watch my discussion with Simon Pfaffmann (the engineer and developer of the concept) discussing the design and possibilities of autonomous one axle electric drive tractor:

The Challenger MT800E Line is All About Power, Performance & Efficiency