Grain markets were mixed for the 3rd week of November, but winter wheat prices finally had a green week of performance thanks to strong export activity and concerns of how the 2020 crop is starting out. Supporting the cash markets has been the slow state of Harvest 2019 and farmers being less inclined to sell, now that they’re getting some much-needed cash from the second round of trade war aid payments.

One of the major headlines this week was the dwindling propane supply levels in Ontario and Quebec. The main reason behind the crunch is the CN Railway strike. As the two provinces get their supply delivered by rail, available supplies are running low. The issue hasn’t reached much of western Canada though, as trucks are predominantly used in the prairies.

Prime Minister Justin Trudeau has refused to reconvene parliament until December 5th, meaning that Ottawa won’t involve itself in the strike for another two weeks. This is intuitively not a good situation for those who are looking to move some grain and get some cash in their pockets before the end of the year. Further, with trains not showing up on CN lines to take grain to port, this will likely weaken cash bids as grain companies are less interested in filling their elevators on top of the grain that’s already not being put on rail.

Comparably, while there is a lot of talk of similar propane shortages in the U.S., it’s actually not that there isn’t supply, but rather that logistics/transport providers aren’t able to get to market fast enough. Demand for energy is up though as U.S. farmers are having to dry more of their grain due to the late harvest, meaning transport/logistics providers can’t keep up, thus resulting in a pseudo-shortage.

Speaking of keeping up, the USDA said that they’ll continue their weekly reporting of the U.S. crop progress into December until the 2019 harvest gets closer to the finish line. [Staying in the reporting theme, yesterday’s export sales report from the USDA showed positive numbers for all three major crops, including 1.52 MMT of soybeans, 834,000 MT of corn, and 438,000 MT of wheat exports. These were all at the top end of expectations.

Specific to wheat though, total shipments are running more than 25% ahead of the pace at this time a year ago, with 11.7 MMT shipped out through Week 24. Durum and HRS wheat exports both continue to track well but the markets eyes are already turning a little more towards the 2020 winter wheat crop. 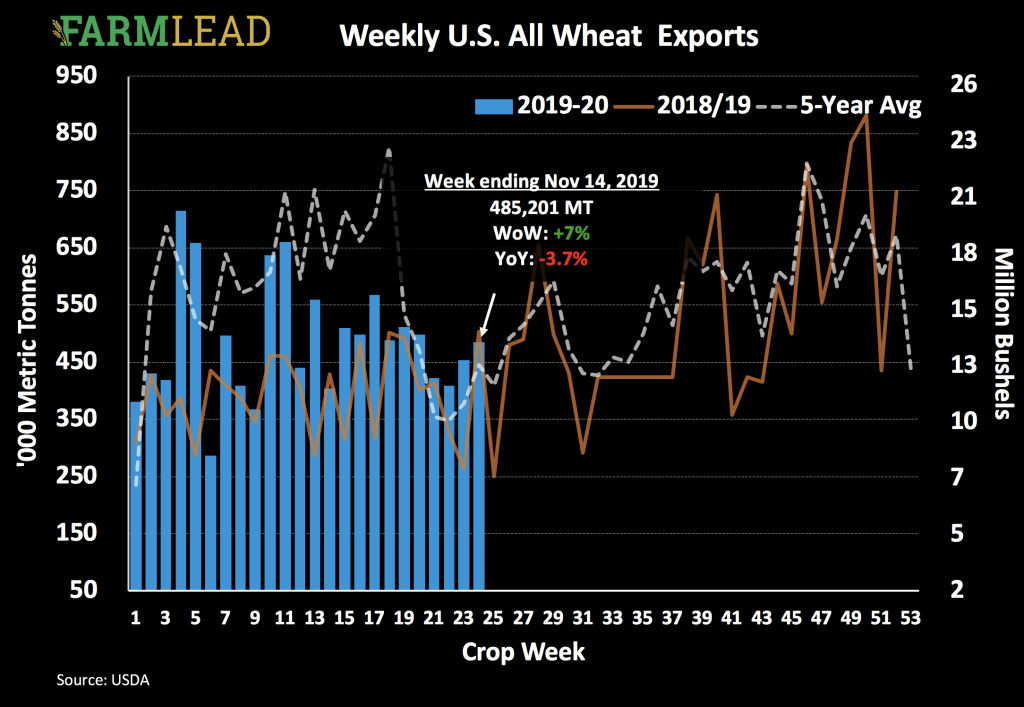 Cool temperatures and drier conditions in the U.S. Southern Plains haven’t helped the 2020 U.S. winter wheat crop get a good start. The USDA said in last Monday’s crop progress report that 47% of Kansas’ winter wheat is in good-to-excellent (G/E) condition, down 4 points week-over-week but still 4 points better than the 43% G/E rating the state received a year ago at this time. Texas is starting to see some drought conditions appear, which correlates with the 30% G/E rating its winter wheat has, down 6 points on the week and well behind 56% G/E a year ago.

Aggregately, average U.S. winter wheat conditions are at 56% G/E, technically up 2 points on the week and 3 points better than this time a year ago. There is some talk out there that the 2020 SRW wheat crop will be smaller, mainly because of the late corn and soybean harvest limiting acres that could get seeded this fall. This is likely why you continue to see a strong spread between SRW and HRW wheat prices.

Switching gears, the Australian Oilseeds Federation is now forecasting a 2019 harvest of a little under 1.9 MMT. If realized, this would be down 18% and 414,000 MT from last year’s 2.31 MMT Aussie canola harvest. With nearly all of Australia receiving below-average precipitation, and limited stored soil moisture available after two straight years of drought conditions, these numbers aren’t all that surprising.

We’ll get another update from ABARES (Australia’s version of the USDA) on Tuesday, December 3rd, which will be a few days before Statistics Canada releases its own update of Canadian crop production estimates on Friday, December 6th. In the meantime, it’s worth mentioning that Agriculture Canada’s monthly update of supply and demand tables was quiet. For canola prices, the AAFC forecasted value was raised for the second consecutive month. 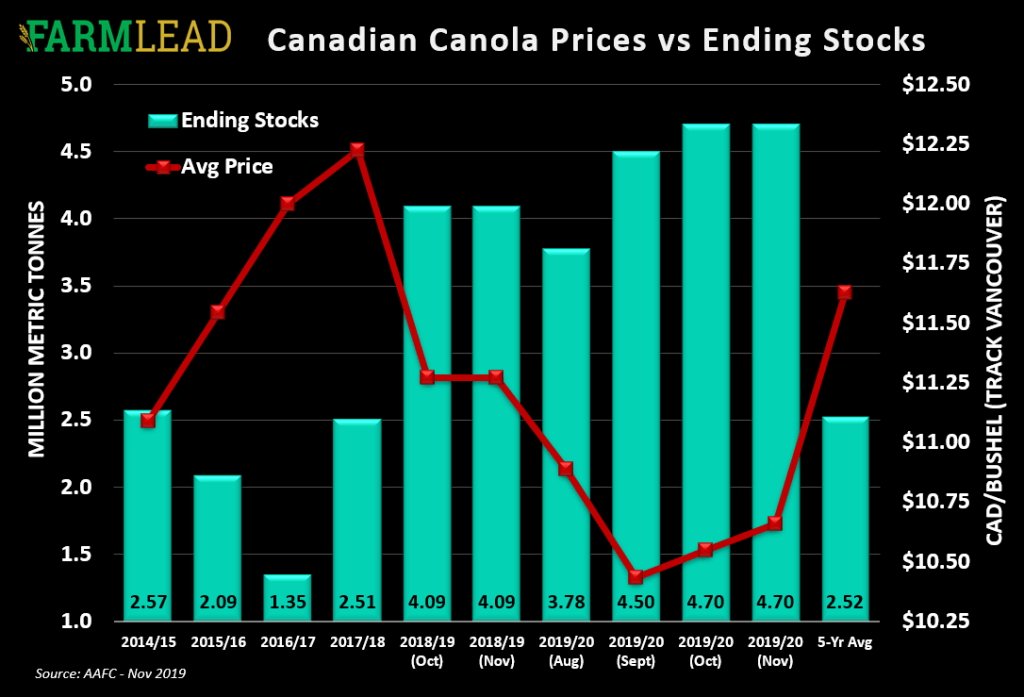 Also moving canola prices though is the declining of vegetable oil stocks in China. The USDA said in their November WASDE report a few weeks ago that, by the end of the 2019/20 crop year, China would hold just 1.46 MMT of canola/rapeseed, soybean, and palm oil stocks, a significant drop compared to levels of the last few years. More specifically, in the last 4 years, Chinese rapeseed oil inventories have fallen nearly 2.9 MMT, or by 77% from the 3.75 MMT held at the end of 2015/16.

Helping canola prices a little are Malaysian palm oil prices climbing yesterday to their highest in 2 years thanks to declining stocks and drier conditions negatively impacting production in southeast Asia. While Malaysian palm oil and Chinese aggregate vegetable oil inventories are certainly something to watch, ample Canadian supplies (as shown in the chart above) and limited Chinese imports of Canadian canola seed are keeping canola prices rangebound. Domestic crush continues to be very strong though and this is supporting canola prices; volumes are tracking 28% higher year-over-year through Week 15 of the 2019/20 crop year.

To round things out, U.S. soybean exports are starting to trend a little higher and also nearly 14% above last year’s pace with 12.37 MMT sailed so far. There were some headlines this past week about Russia supplying China with soybeans but they don’t have nearly enough production to meet the demands of the People’s Republic. That said though, Brazil and Argentina do. 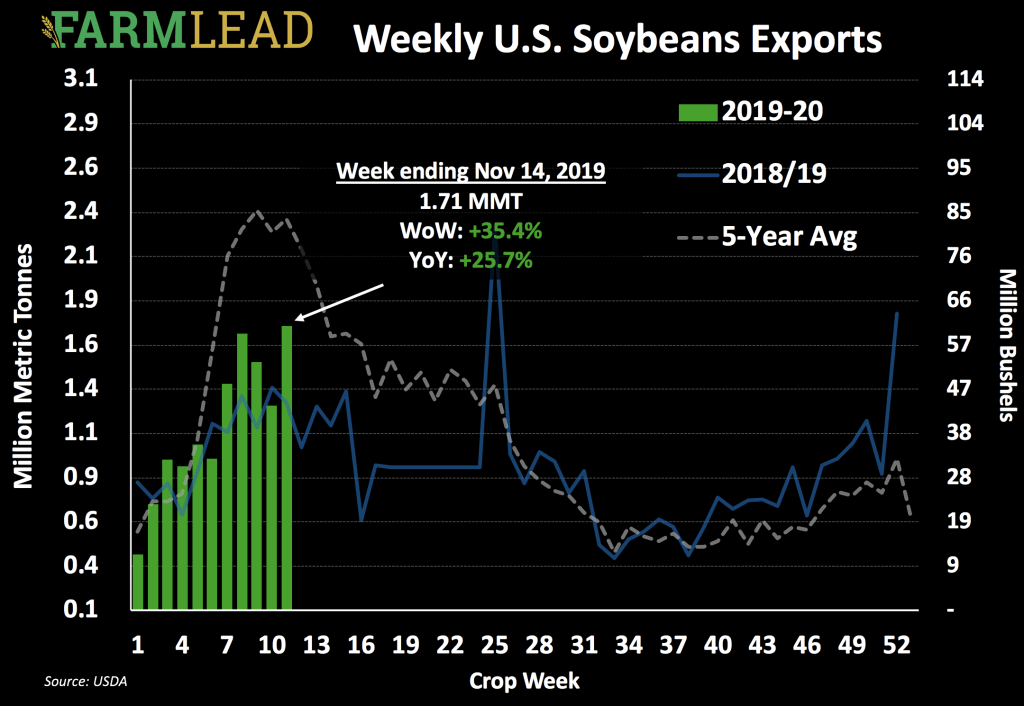 That said, trade talks between the U.S. and China ran in circles this past week, and with next week being U.S. Thanksgiving. it’s more than likely things will slow down further. While there hasn’t been a lot of optimism lately, China did reiterate its stance this pas week that they want to get this initial Phase One deal done as soon as possible. China also invited U.S. trade negotiators to Beijing for face-to-face talks but U.S. representatives said they wouldn’t travel there until they can get firm numbers on intellectual property/technology transfers and, more importantly agricultural purchases. Looming in the background is the date, December 15th, which is when the next wave of U.S. import tariffs on Chinese goods are set to go into effect.