Grain markets ended the month of November strongly as a shortened trading day on Friday, November 29th (due to the U.S. Thanksgiving holiday) saw significant technical selling, which pushed prices up. Corn gained eight cents while Chicago SRW wheat futures jumped 15 cents on Friday alone — helping the complex end the month on an upbeat note. However, for the month of November, corn, soybeans, and Minneapolis HRS wheat saw significant losses. Amidst mostly weaker grain prices and harvest challenges, this November was not the one we were hoping for.

A lot of the decline in soybeans was attributed to reduced optimism that a trade war deal would be found between China and the United States, in addition to some better moisture conditions in Brazil. . Through last week, 79 per cent of Brazil’s soybean acres were seeded, down from last year’s pace of 89 per cent but in line with the historical average.

That said, last week, Brazil’s central bank cut interest rates by 0.5 per cent or 50 basis points, which devalued the Brazilian Real against the U.S. Dollar, making it cheaper for international buyers to purchase Brazilian soybeans. This has spurred more forward contracting of this year’s Brazilian soybean harvest, as well as international buying, as China purchased at least 40 boats-worth of Brazilian beans booked last week.

It’s widely expected that Brazil’s soybean harvest will be a new record of something around 124 MMT. However, thanks to an earlier soybean harvest and improving logistics, Brazil’s soybeans are coming to market faster than ever in January. This is making the window between the American and Brazilian soybean harvest much shorter (as well as more competitive on the soybean exports front). I’m positive in the past that the inability to get a trade war deal done because the Chinese are just waiting on the South American soybean harvest and how the President Trump impeachment hearings play out (and one other factor I’ll mention in a bit).

Speaking of exportability, one group, Anec, is expecting Brazilian corn exports to reach a new record of 41 MMT in 2019. After a small harvest 2018, if these 41 MMT of shipments are realized, this would be an astounding jump of 80% year-over-year, in addition to soaring past the current record for Brazilian corn exports of 20.7 MMT, set in 2015. Of course, the crop has to get off first and the majority if Brazil’s corn is grown in the second/safrinha season, meaning it gets planted after the Brazilian soybean harvest is done. However, there are some doubts about the size of the Brazilian corn harvest harvest, as the delayed soybean planting start in some areas means a delayed soybean harvest, which then means a delayed (and less optimal) date for planting the second corn crop

Coming back to North America, in this past week’s crop progress report from the USDA, the American soybean harvest is 94% complete, up 3 points on the week and matching last year’s pace. While the soybean harvest is now in line with its historical pace, but the corn harvest continues to lag as 16% of the crop remains unharvested, making it the fourth-slowest U.S. corn harvest ever. This would suggest that more than 2 billion bushels of corn have not been cut yet. This includes over 10M acres of corn in U.S. Northern states (ND, SD, MN, WI, and MI), including 70% of North Dakota’s corn that still hasn’t been cut.

Looking even further north, after a few days of losses, Canadian canola futures and cash prices were able to rebound a bit in the second half of this last week of November. A stronger Loonie has also pressured Canadian canola markets, but, canola has also been tracking the soybean complex, which has been pushed lower with no trade war deal with China completed yet.

Putting more pessimism in the trade war talks, President Trump signed a new law this week that will have the U.S. annually review if Hong Kong should continue to be afforded its special trade status with the U.S. The goal behind the Human Rights and Democracy Act is to ensure Hong Kong has enough democratic autonomy from China to justify the U.S. given preferential trade treatment. Probably the last thing Chinese officials wanted to see this week was a parade of U.S. flags through Hong Kong, as protests for more democracy continue.

Moving away from politics, Canadian canola domestic demand continues to be strong as a new monthly record was established in October. Last month, Canadian oilseed processors used 882,301 MT of canola, eclipsing the previous record set in October 2017 by a little more than 11,000 MT. The October canola crush volume was also up 15% from September’s crush, and 12% from October 2018’s levels. With profit margins of $100 CAD/MT nearly double levels seen at this time a year ago, Canadian canola processors have no reason to not keep crushing at these record levels, which, for the crop marketing year, are also up about 26% year-over-year.

Very clearly, demand for canola oil (including abroad) is healthy. Demand for actual canola seed aboard isn’t as robust though. Through Week 16, Canadian canola exports have totaled just 2.83 MMT. While a new marketing-year high was set last week with nearly 450,000 sailed, total canola exports are tracking 10% behind last year’s pace. 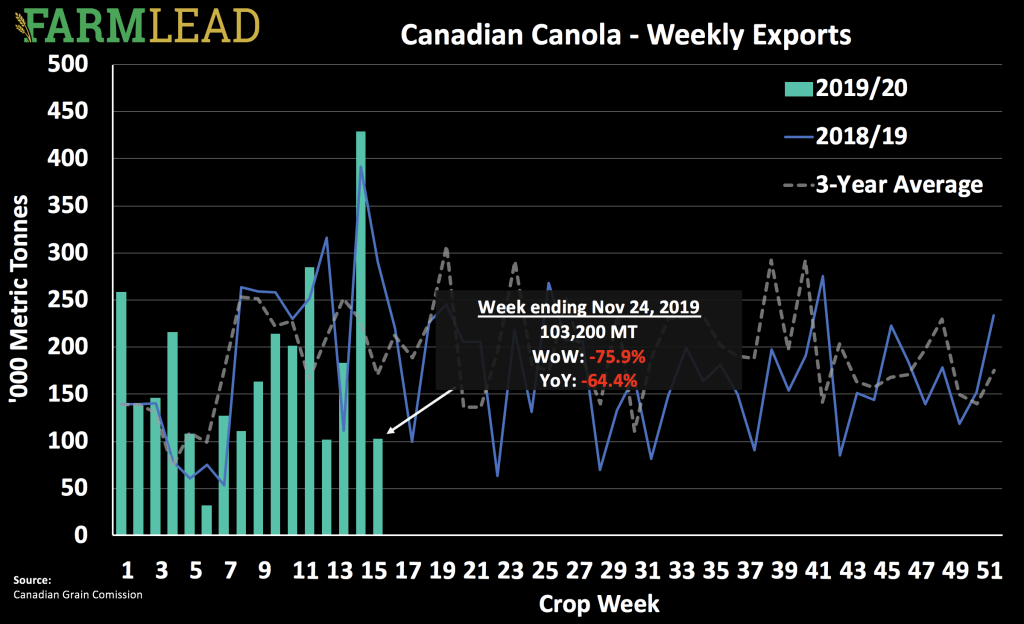 Finishing November off, some production issues in India and Turkey were supporting both pea and lentil prices in North America. ’ve continued to see strength in the pulse markets as we near the end of November, notably in green pea prices, as cash deals above $11 CAD/bushel have been consistently seen on the FarmLead Marketplace. Further, we seen small red lentils trade in the 19 – 20¢ CAD/lbs level this month (dependent on region, freight, and movement time) while large green lentils are been leveling off about 25¢ CAD/lbs. As we end the month of November, traders of pulses in India are calling on the government there to allow for more imports in order stabilize markets and ensure enough supply. Late fall rains will likely have a negative effect on the production of pulses in India this year, and traders there are expecting prices to remain firm until March, when the rabi (fall) crop starts to get harvested. 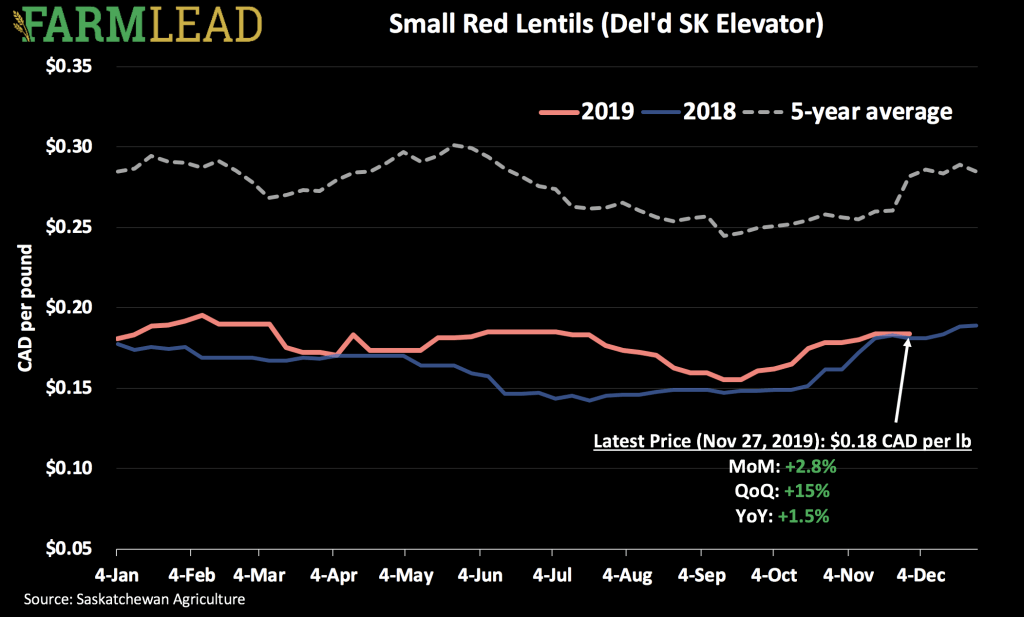 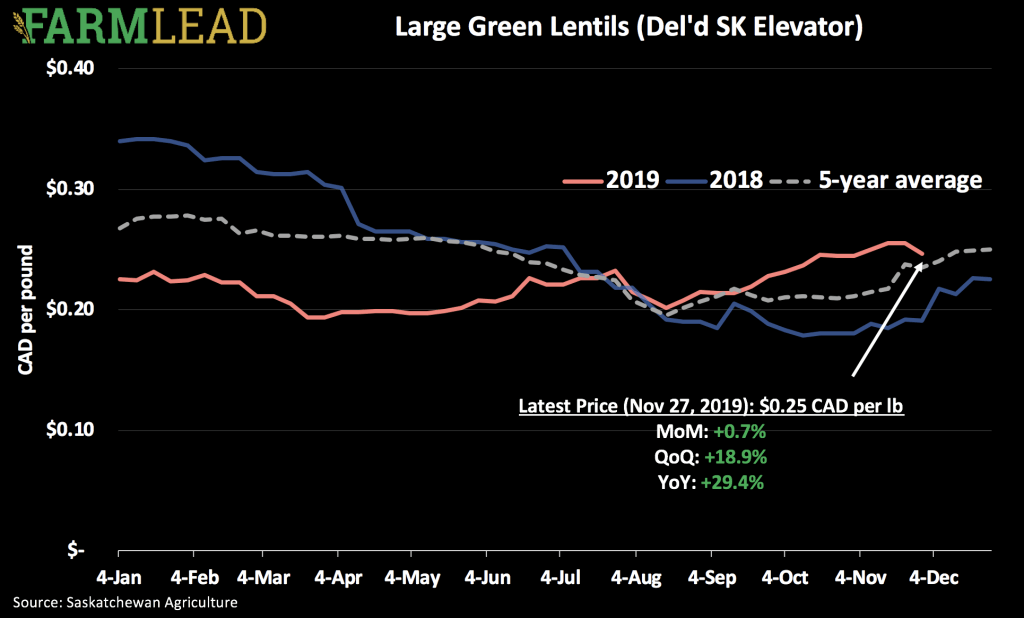 Very clearly, other than corn basis in the U.S., pulses might be the one bright spot of North American agriculture at the moment. Despite some very challenging growing conditions this year, resilient farmers have been able to prove that they can produce, keeping the industry well-supplied. Accordingly, demand needs to continue to play its role in support prices. From some industries, like pulses, exports are the only main demand function currently, whereas others, like Canadian canola and U.S. soybeans, are seeing strong domestic activity, but weak international demand. For these latter markets like Canadian canola, without both domestic and international demand functions operating strongly, the result is weaker rallies (read: not as aggressive and not as long in duration). Manage risk accordingly.