No one wants to see crop under snow, especially when that crop is either a) not really ready to harvest or b) most of your acres. Western Canada has been hard hit by snow cover this fall, and it seems the early start to winter now extends to most of Ontario, too.

The recent snowfall and cold temps are causing issues with grain drying, says Peter Johnson, host of Wheat Pete’s Word, and in this week’s episode he explains why both the temperature of the corn flowing in to the dryer and the air temp being drawn in to cool it could change test weight (and not for the better). Also in this week’s Word, a discussion on oat lodging, why the combine yield monitor is not to be taken as gospel, and why it’s time to phone a friend.

For those of us who rely on combine monitor only for side by sides, plot results and (ultimately) variety decisions: here’s the possible variability, when measured against a scale. pic.twitter.com/9YjwK7gwdr 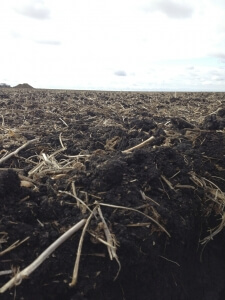 Soil health directly impacts crop health, which directly impacts your bottom line. RealAgriculture's Soil School provides an opportunity for farmers to learn how to improve soil through discussions on the use of cover crops, strip-till and no-till, compost, manure and more. The Soil School is made possible through the Ontario Soil Network and The Mosaic…Read more »

Canola School: Clubroot sanitation takes time, but is well worth it in the long run