You’ve worked hard and expanded the farm’s land base from about 1,200 acres to 2,400. Where’s your money better spent — a second combine or a grain dryer?

Scott Keller, who farms at New Norway, Alta., says the economics are cut-and-dried on that topic. According to Keller —hands down — you’re better off setting up a grain dryer than buying a second combine, especially if the fall weather trend for the next few years wet and inclement.

Keller’s family has been using a grain dryer since 1995, and while it’s difficult to put a value on who much money the dryer has made or saved the farm — he can’t imagine farming without one.

They’re work, for sure, the old ones especially, Keller says, as there’s certainly a labour demand to running a dryer, but in a rough fall season like 2016 or now 2018, having a dryer can mean the difference between being out in the field, or being miserable watching the forecast.

Keller says he runs his dryer at about 4.5 cents/bushel, but a good rule of thumb is a cent per point per bushel. Keller’s dryer is hooked up to 3-phase power and natural gas. Those on propane could see that cost almost triple, and continue to climb if using a diesel generator. That said, drying at the elevator could cost you 20 or 30 cents or more per bushel.

For capital costs, Keller says their dryer set up in 1990 cost them about $30,000, plus an elevator leg and a few other things like aeration fans for bins. “That dryer has probably seen 3 million tonnes and I’ve replaced a few bearings and an ignitor,” Keller says. A similar-capacity unit will run about $80,000 now, and farmers could be looking at about $150,000 for a complete set up with an elevator leg and a holding bin. Now, that said, many farmers already have some bins and fans that could integrate into a dryer system.

On Keller’s farm, they can dry grain 24/7, but don’t necessarily need to every year. He likens having a grain dryer as similar to calving season — a cow CAN calve on her own, just like a grain dryer CAN dry grain unattended, but there are risks to not being there. The risk of fire is certainly there, Keller says, and so if you plan for a dryer, make sure you’ve got the person-power to keep it running.

If you’ve thought about adding a grain dryer, what size should you choose? Keller says his dad built the dryer when they farmed 1,200 acres with a single 9500-series John Deere combine. At double the acres now — and with a larger combine — the existing system still keeps them running, unless grain in coming in at over 20 per cent moisture. “Multiple combines would create a larger issue, for sure. You’d need an efficient system for storing wet grain,” he says, and it does require an extra move of that grain. 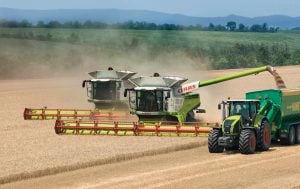 TechTour: A combine that optimizes threshing settings by itself

Just learning how a combine runs can be an overwhelming task, let alone trying to adjust it for optimum grain quality and performance while conditions change throughout a day of harvesting. With the latest changes coming to its Lexion combines, Claas says the machine will do that automatically, as the company has introduced what it…Read more »

9 factors that contributed to this mess of a corn crop

No Screens to Clean in Mixed-Flow Dryer