Grain markets finished the week before Christmas mostly all in the green as follow-on technical buying and physical buying pushed the complex higher. Meanwhile there is still some uncertainty about how the trade deals are going to be executed, namely the $50 billion in agriculture purchases that President Trump has said China would buy.

This week, amidst all the impeachment hoopla, the U.S. House of Representatives passed the new UMSCA trade deal, replacing the NAFTA framework for trade between the United States, Canada, and Mexico. Unsurprisingly, President Trump and House Speaker Nancy Pelosi are arguing over credit of the deal getting passed! Despite the UMSCA and Chinese trade deals in his pocket, U.S. trade chief negotiator Robert Lighthizer says there’s still work to be done, notably new trade deals with Europe.

Speaking of Europe, concerns of the start of the EU 2020 winter wheat crop is helping push up wheat prices on the other side of the Pacific. Heavy rains in western Europe has delayed sowings everywhere from the United Kingdom to France to Germany. We know British wheat millers have been buying more German 2019 wheat, “taking extra supply cover in case the delayed British crop reduces the quality of the harvest,” one trader says.

One speculator has been quoted that saying wheat prices could rally 40 per cent this coming winter thanks to harsh winter weather around the world. Since I don’t look at grain markets through a doomsday, I’m slightly less bullish. However, I do think wheat prices will see some seasonal gains through the end of January, albeit in the neighbourhood of five to 10 per cent gains, not 40 per cent like said speculator is saying is possible. 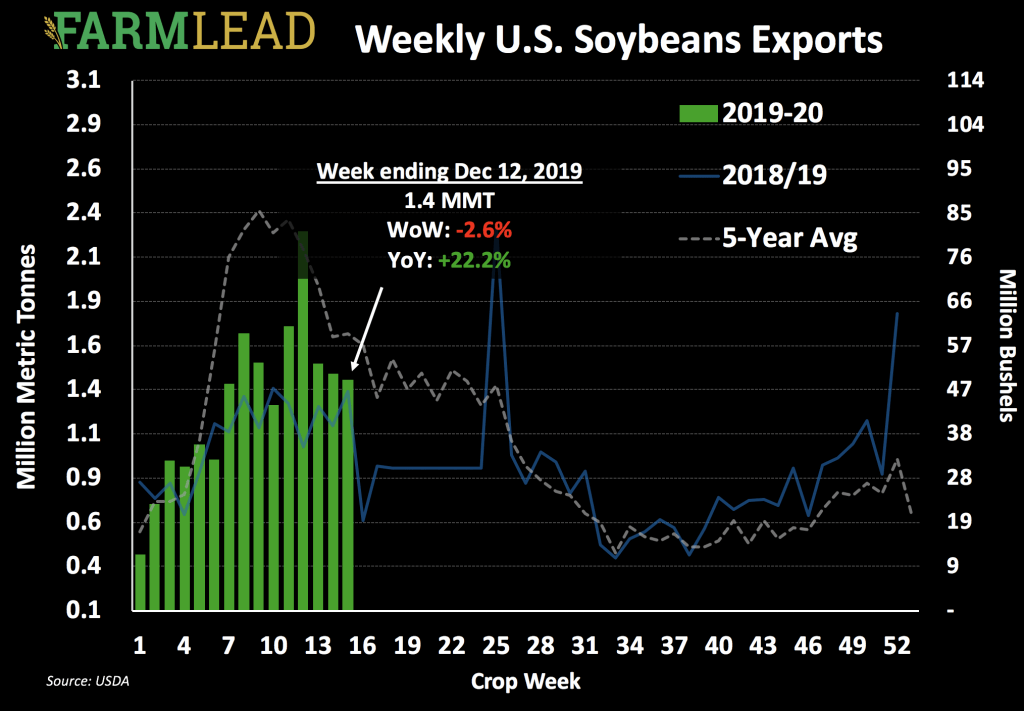 That said, any headlines about Chinese purchases of U.S. soybeans will likely help catalyze speculators adding to their long positions in soybeans. However, with technical resistance levels at basically every 20¢, rallying soybean prices will certainly see some pushback. If U.S. soybean export sales don’t meet pre-report expectations going forward, then we’ll likely see some negative reaction to soybean prices.

Looking outside the U.S., a recently published study by a Brazilian business school suggests that Brazil could lose $10 billion in farm exports to China annually if the trade war deal between China and the U.S. actually gets implemented. Also, Canadian Prime Minister Justin Trudeau, in his mandate letter to his Minister of Agriculture, Marie-Claude Bibeau, stated that Canadian farmers impacted by international protectionist policies should be supported faster. Despite issues in pork, beef, and canola exports — Canadian dairy is the only sector to have received compensation ($1.75 billion over the next 8 years as a result of the USMCA deal) that doesn’t have to be repaid.

While the trade deals getting done before Christmas is generally viewed as a positive, the White House recently announced that their sticking with their plan for 2020 biofuel blending requirements. Despite a proposal of using a three-year average of EPA waivers, the White House is saying that they’ll instead use a three-year average of energy department estimates of potential waivers. The bottom line is that this is a win for Big Oil. While refiners are required to blend 15 billion gallons of corn-based ethanol, the amount waivers for “small” refiners will likely continue to be quite high.

Thinking about the Canadian market, I’ve been getting a lot of questions about whether or not canola prices will rally with the soybean complex. Further, why haven’t canola acres gone higher despite the 1-2 million acres that still haven’t been harvested in Western Canada. Worth noting though is that canola prices have actually had more positive daily gains in trading, over daily losses. Regardless, one of the main reasons for the weaker activity in canola prices is the carryover from last year. That said, in their monthly update, Agriculture Canada did lower Canadian 2019/20 canola ending stocks by 1.2 MMT from the November estimate! 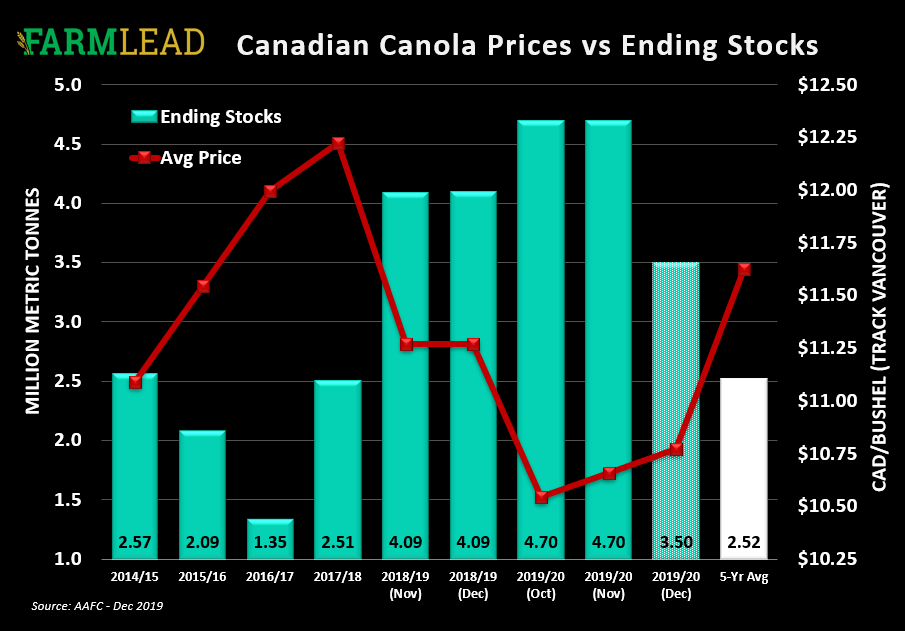 The reason for the bullish downgrade is because of the robust domestic demand that we’re seeing for Canadian canola. That said, we know China has certainly backed away a bit and Canadian canola exports are tracking seven per cent behind this time a year ago with 3.43 MMT shipped out through Week 19. Conversely though, through the previous week, visible canola stocks were sitting at three-year highs, despite crush running nearly one-third higher than a year ago! 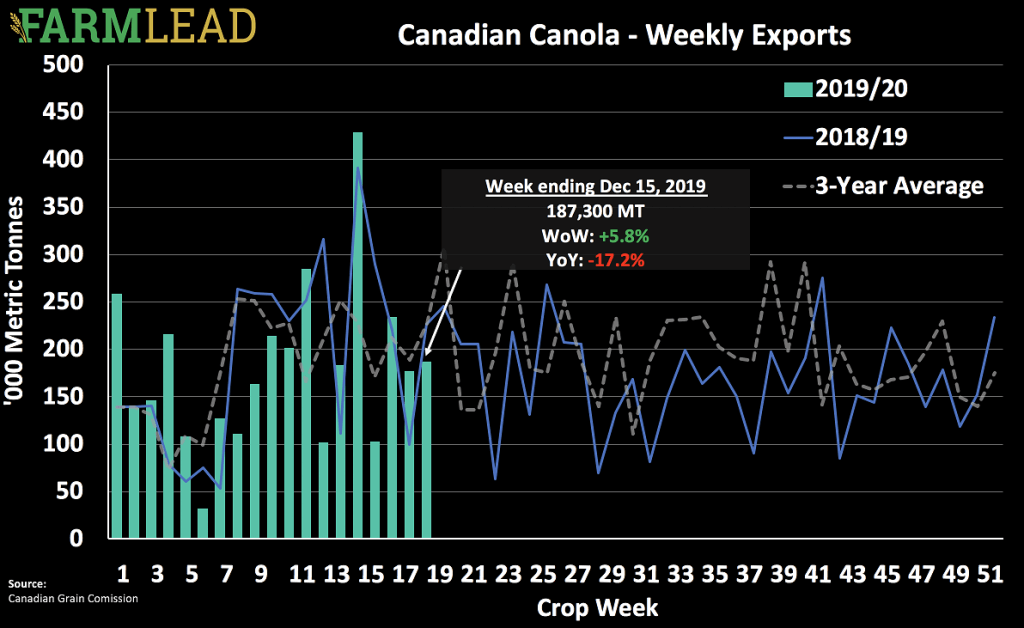 From a competitive standpoint, I continue to keep my eye on Eastern Europe as we’ve seen more rapeseed production coming out of the Black Sea. A growing rapeseed market in Ukraine, Kazakhstan, and even Romania is mostly a function of stronger demand from EU rapeseed importers, but what about Russia? While the country only planted 4.45 million acres of rapeseed in 2019, the head of oilseeds for the German Seed Alliance, Sergey Tuchin, thinks that Russian rapeseed acres might top 12 million acres before 2024.

With rapeseed production in Russia literally 10 times bigger than the 200,000 MT produced a decade ago, there’s clearly more farmers looking to diversify both crop rotations and market access. The obvious notable is China, which is now connected to Russia by a bridge that is nearly competition and open for traffic by the spring of 2020. All this in mind, Russian rapeseed production still has some headwinds: yields remain low (averaging about 27 bushels per acre), as many producers save seed for many years.

Conversely though, there’s an estimated 100 million acres of fertile farmland in a area the size of the Canadian Prairies sitting in Siberia that hasn’t been touched for decades! While that might sound scary in theory, the reality is that it’ll take many years for this land to be developed/worked on to make as productive as what we have here in North America!

Merry Christmas, Happy Holidays, and we’ll see you in a few weeks with a 2020 Grain Markets Outlook!