Grain markets ended the second week of December all in the green as news of the U.S. and China finally agreeing to terms of a phase one deal to stall the ongoing trade war. Also supporting prices was the market tracking higher soybean and corn prices in South America, as well as digesting limited changes from the December WASDE report.

Included in the terms of the phase one deal is China’s commitment to buy at least $40 Billion of U.S. agricultural goods for the next two years, upping purchases by $16 Billion from the 2017 baseline of $24 Billion. Overall, China is planning to commit to buying $200 billion more from the U.S. across agriculture and three other industries: manufacturing, energy, and services. From a timeline perspective of these purchases, those details were not disclosed as both sides felt it would inappropriately distort markets.

On the flipside, the U.S will reduce current 15 per cent tariffs on $120 Billion of Chinese goods introduced back in September from 15 per cent to 7.5 per cent. Further, the U.S. will not proceed with a new set of tariffs on roughly $160 Billion of Chinese goods planned to be enacted this Sunday, December 15th. While the deal still needs to be legally vetted, head U.S. trade representative Robert Lighthizer says that the deal meets all WTO requirements. It’s expected that the deal will be officially signed in January 2020.

Grain markets were desperately looking for headlines to drive direction, as this past week’s December WASDE was a dull event with practically now changes from the USDA. Noting that there’s still over 6.5M acres of corn that hasn’t been harvested as of this past Sunday, the USDA still didn’t touch harvested acres, keeping them at 81.8M acres. Further, yields and total production numbers were also stayed! By preserving the status quo, the USDA is potentially setting itself for some trouble and an explosive January WASDE report, which is supposed give the final numbers from the U.S. 2019 harvest. 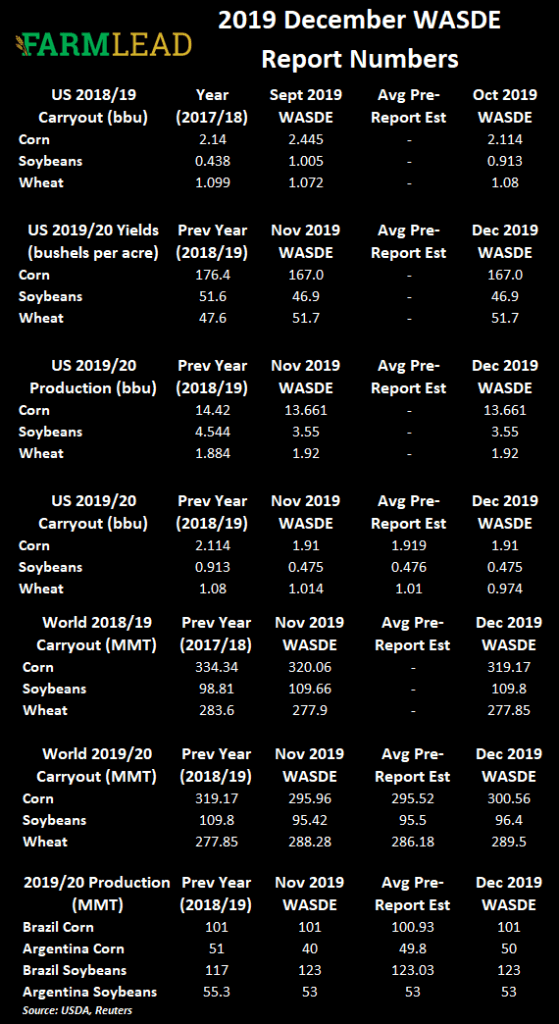 The only major notable change to the U.S. balance sheet was U.S. durum ending stocks getting lowered by 20M bushels (or about 545,000 MT). This is a reflection of the strong pace of U.S. durum exports, which are tracking about two-thirds higher than this time a year ago. Comparably, Canadian durum exports are also pacing nearly two-thirds above a year ago, however, durum prices haven’t really rallied, with average values in Western Canada staying around $7.50 CAD/bushel. . Why durum prices rallied more is because there is just a lot of durum left in the pipeline from the 2018/19 crop year: 1.68 MMT from Canada and an unusually large 1.5 MMT in the United States (the latter of which was, like everything else, unchanged in the December WASDE).

Even if we looked at the southern hemisphere numbers from the December WASDE, there were no changes to corn and soybean production numbers in Brazil and Argentina. Separately, CONAB (Brazil’s equivalent of the USDA), said in their monthly report that they’re forecasting Brazilian soybean production for their 2019/20 crop year at a record 121 MMT and the corn harvest at 94.4 MMT. This meant that no export numbers for the two countries were changed in the December WASDE. In the same theme, the USDA did not change U.S. soybean exports, despite shipments now running 22% better than a year ago through Week 14! 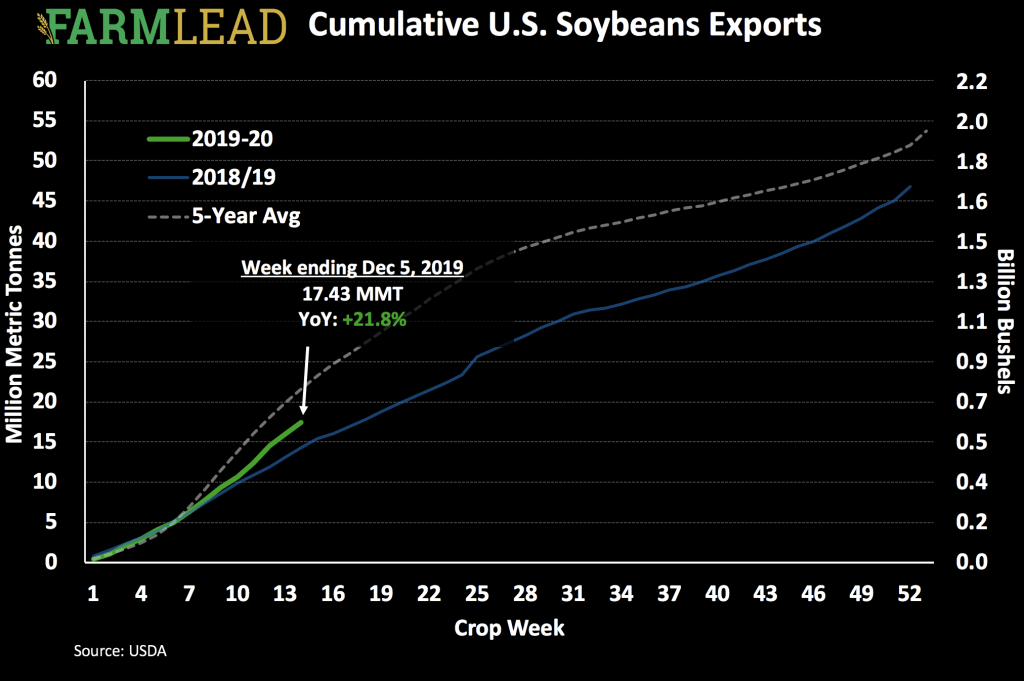 Staying in South America, strong domestic corn prices in Brazil are basically telling farmers there to sell both any remaining old crop, as well as new crop supplies. Since September, Brazilian corn prices have climbed more than 30% since September are now sitting at the highest levels since August 2016. The reason behind the increase in Brazilian corn prices is a function of tight supplies, strong domestic demand (namely from the livestock and ethanol sectors), and a weak Brazilian Real (as compared to the U.S. Dollar). Currently, in the major livestock-producing areas of Brazil, corn prices are sitting around an equivalent USD price of $5.50 per bushel.

That said, JBS, the Brazilian meat company is expecting to import nearly 200,000 MT of corn as they try to diversify away from the more expensive domestic options. Currently, it’s estimate that, despite a record corn harvest of roughly 100 MMT, record export volumes will still put the country in a bit of a tight spot. More explicitly, it’s estimated that Brazilian corn exports will hit a new record of 41 MMT for the 2019/20 crop year.

Accordingly, Mr. Kluis thinks that something above $4.40 will be seen for corn prices in 2020. That said, we are seeing some indicators that demand for U.S. corn is improving, which should help corn prices track towards the levels mentioned above. As a reminder though, these rallies don’t happen overnight, but rather over multiple months.

Rolling The Dice — This Week in the Grain Markets

Wheat Market Transparency — How can it be fixed? Or does it need fixing?