Syngenta Canada is going where the growth is. That growth potential is solidly in soybeans and corn, says the company’s head of seeds, and Syngenta’s research and product selection will reflect a rebuilding of market share in corn, and a continued presence in both non-GMO and GMO soybeans.

Dan Wright, is head of seeds for Syngenta Canada, and he says that corn under thee NK seed brand won’t likely make an appearance in Western Canada anytime soon, as the company focuses on Ontario and Quebec.

“We’ve spent a lot of time and a lot more investment to rebuild our corn portfolio,” Wright says. The NK brand was definitely a leader, and one of the first to introduce BT corn. Wright says that NK 3030 was one of the first hybrids to consistently deliver over 200 bushels for farmers, and they remember that. Now, he says, the company is committed to re-investment, and has hired a product selection scientist to expand trials and offerings.

Expanded options include some new rootworm and western bean cutworm fighters, but all within the over 100-day lines. The focus, Wright says, is mainly in Eastern Canada, though there is the possibility of some products developed for the Quebec market could transition to Western Canada at some point. However, before that would happen, the products would have to be thoroughly tested in Western Canada. “We want to make sure it’s the right business model and products that are locally tested and proven, so that when a grower grows whatever we are selling them it yields as we say (it will).”

Syngenta Canada recently exited the cereal breeding business here. While the slow progress towards a new royalty model in Canada played a role in that decision, Wright says, that isn’t the reason for the move.  “We are looking at growth opportunities…and the Canadian (cereals) market at this time just really wasn’t conducive to our private breeding investment,” he says.

Hear more from Dan Wright in the audio below, recorded at the recent Canadian Seed Trade Association meeting: 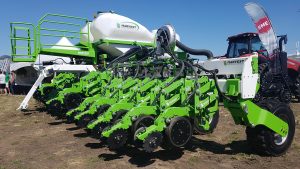 Pulse School: Which Input is the Most Important for Max Pea Yields?

The Solution to Better Refuge Management is in the Bag – Steve Denys, Pride Seeds

The 10 Commandments of High Yielding Wheat