The Canadian Food Inspection Agency (CFIA) has implemented a “transition period” for the feed, water, and rest requirements for all livestock sectors, in addition to the previously announced grace period extended to beef and dairy animals.

CFIA says it will use the first two years of the new regulation period, beginning February 2020, to “focus its enforcement efforts on compliance promotion through education and awareness measures, which are part of the CFIA’s continuum of enforcement actions,”

The amended regulations contain outcome-based requirements to ensure that animals are not likely to suffer (from exhaustion, dehydration, because of adverse weather or other conditions), be injured or die. These regulatory outcomes of Part XII must still be met, CFIA says, and has the discretion to appropriately enforce these outcome-based requirements to prevent and act on situations where animal welfare is compromised. 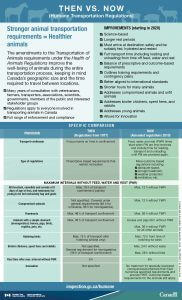 The National Sheep Network (NSN), made up of the Ontario Sheep Producers, Alberta Lamb Producers, and Quebec Lamb Producers, has asked CFIA for clarification on several aspects of the rules and implementation of the new regulations.

Specifically, an animal in the last 10% of its gestation period or one that has given birth during the last 48 hours will be considered unfit for transport. NSN recognizes that the intent of the regulation is to prevent long-distance transportation of these animals, however, NSN is concerned about the potential negative impacts of the regulation. One of those being that sheep transported to lambing pastures would be in contravention of the regulations, when the purpose of moving them to such pastures is to improve the conditions of birth – more space, shelter, matching nutritional needs.  NSN has requested that an exemption, like the ones in the UK, be given to allow producers to move their animals from farm to farm or on-farm. More specifically, that farmers can move animals to lambing pastures if the distance was less than 50km or 31 miles.

There is also concern that rest-stops may not be able to handle sheep at their facility and the problem this will have on the sector looking to comply with the regulations, a similar concern raised by the beef sector.

The regulation is also unclear as to who will need transport training (will all producers be required to take training?) and who designs, teachers, and oversees the training process.

In addition to the announced grace period, the CFIA has agreed to host a webinar on the Humane Transport Regulations. This webinar is scheduled for January 14th, 2019.